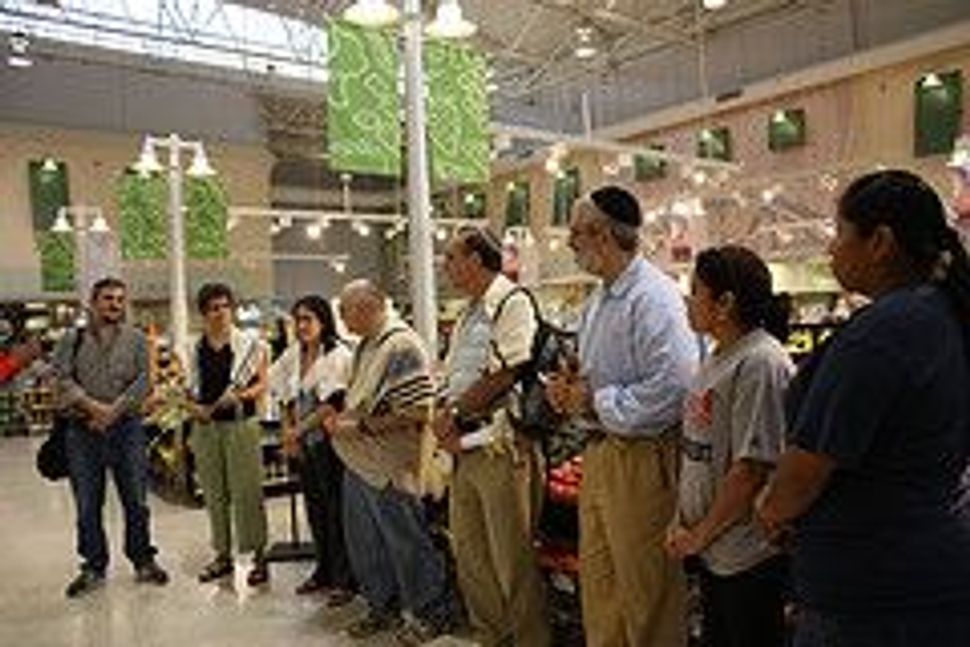 I wrote about the CIW for the Jew and the Carrot back in October, and as luck would have it, was in Immokalee last week, taking another group of “tomato rabbis” to meet with the workers and become inspired to take action along with their congregations. As trip participant Rabbi Robert Dobrusin described, “We saw the destitute conditions many of these workers live in. We heard the stories of the hard, backbreaking work and stood in the parking lot in the middle of the town at 6 a.m. as workers boarded old school buses to take them out to the fields. And, we learned of the efforts that are starting to make real changes in the lives of the workers because of the dedication of the leaders of the coalition and volunteers who have come to their aid.”

Rabbis have long been allies of American farm workers in their struggle for justice. In a chapter for Mary Zaimor’s The Sacred Table, Rabbi Peter Kasdan describes his deep friendship with Cesar Chavez and his activism within his congregation (and the leadership roles of the UAHC and the CCAR) to support the grape and lettuce boycotts of the 1960s and 1970s. Describing how the religious values of the Reform Movement became entwined with the destinies of America’s migrant farmworkers. He wrote: “What did I know of boycotts and farm workers? Of pesticides and labor unions? The Union’s resolution on “Farm Workers and the Grape Strike” would serve as a turning point in my career, indeed in my Jewish life, as I took the words of the resolution to heart.” His rabbinate became defined by his deep friendship with Cesar Chavez, whose yartzheit Rabbi Kasdan still observed, and his activism in solidarity with those who pick the food we eat, people who are often rendered invisible in the modern, corporate American food system.

I see our campaign at RHR-NA as continuing in that rabbinic tradition of solidarity with the people who pick our food. At a CIW rally at the Trader Joe’s headquarters in October, Rabbi Suzanne Singer presented a letter with the names of more than 120 members of Rabbis for Human Right-North America, urging Trader Joe’s to stand up to its reputation as an ethical company by signing a Fair Food Agreement. The letter read in part:

We wish that slavery had ended when the Jewish people left Egypt, or 149 years ago after the Emancipation Proclamation, but it didn’t. The Florida tomato industry has been called “ground zero” for modern slavery by one federal prosecutor. Slavery is the extreme end of a continuum of worker mistreat in the fields that includes wage theft, violence, sexual harassment, and exposure to pesticides. Jewish tradition demands that workers be treated with the respect and dignity due to a reflection of the divine image and paid a fair wage.

The Trader Joe’s decision speaks to the importance of seeing food justice activism as more than just “voting with your fork” (as Michael Pollan described in The Omnivore’s Dilemma) but actually taking the time to send letters, speak with store managers, and hold public actions to educate other consumers. Members of the CIW told me that they increased their pressure on Trader Joe’s because so many customers were writing to them to ask for postcards and other resources directed at Trader Joe’s. Trader Joe’s customers saw themselves as allies of the farmworkers in their campaign for human rights.

In his December post, “Deep Kashrut Resolutions for the New Year,”, Rabbi Noah Farkas reminded us that “We cannot understand our food if we do not understand how food empowers or impoverishes those who produce it and those who eat it” and demanded that we “resolve this year to support Jewish campaigns that seek to change the political system that uses food as a social weapon.”

His words are a reminder that even with this critical victory in partnership with Trader Joe’s, the CIW’s campaign for more a more just tomato is not over. The attention now turns to grocery giants Publix (who famous said “If there are some atrocities going on, it’s not our business”) and Royal Ahold, who own Giant Supermarkets and Stop and Shop. For more information on breaking developments and to take action, please visit: http://www.ciw-online.org and