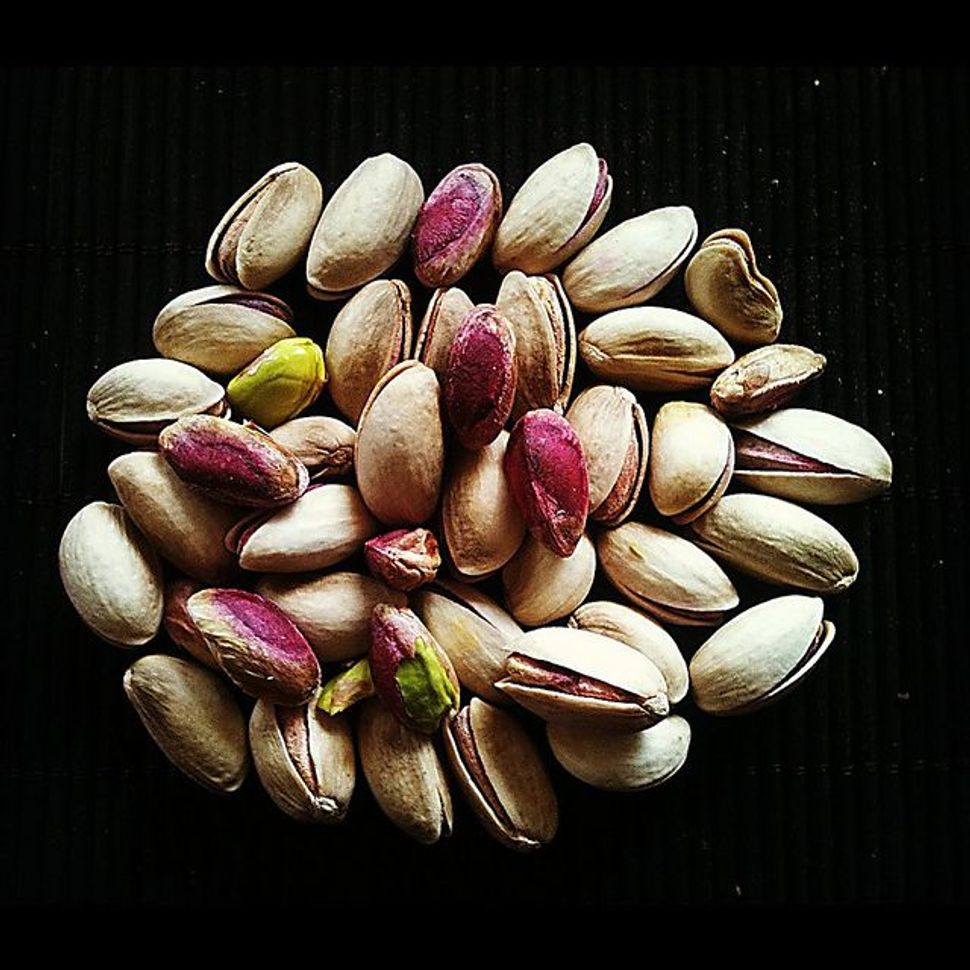 Sometimes in Nashville, keeping kosher is about more than just the haksher (kosher symbol) on the packaging, it’s about finding the ingredients to begin with.

Last week, I was tasked with making a Tu B’Shvat treat with my Sunday School class. I had also promised the class that we’d make a dessert. I’m sure they had cake in mind, but I’m not one to settle for something as simple as cake. Besides, cake takes more than 40 minutes to make, and that’s all I get each week with the kids. That time is either spent in the kitchen, in the Shul’s garden (from which the mint for this recipe was picked), or doing crafts; next week we’re making decorations for the Shul’s fundraiser in March, “Shtetl Home Companion.” In and of itself, making a dessert is no big deal.

Generally, I give the Cantor my ingredient list, and he buys whatever is kosher and available. I frequently give him alternative ingredients, which is great, since I’m a “throw-a-little-of-this-or-that-in-there” kind of cook. Not being great at following recipes, it is fun to see what the Cantor is able to come up with on the fly. Barring that, it’s fun to get phone calls from him as he’s trying to describe what part of the grocery store he’s checking for my items.

On top of keeping strict kosher and finding a recipe for a tree ingredient laden recipe, I also had to make it a parve dessert. The dairy kitchen was reserved for another class, so we were relegated to the meat kitchen. Nothing against meat, but that kitchen is the pits to attempt flambé with four teenagers. Yup, I said flambé: Citrus Fruit Flambé with Pistachio Praline.

While making flambé seems like a challenge, especially with teenagers, I think I had the easy part. The Cantor, on the other hand, went on a scavenger hunt to find out if Cointreau is kosher (which it is, but he couldn’t find any), if Sabra is available in Nashville (which is still yet to be determined), and finally that unflavored rum is a fair substitute if all other options prove to be exhausted.

I also sent the Cantor to look for unsalted pistachios…without the shells. There were multiple questions from the Cantor, and finally I directed him to the Nashville Farmers’ Market where I buy my own spices in bulk, and regularly see Shul members doing the same. After initial trepidation, the Cantor was thrilled to have both found the building and the pistachios. He also came to the conclusion that they did not need a kashrut symbol, since they are raw ingredients. The praline was the easy part. Nothing’s hard about melting sugar with nuts. Okay, crushing the nuts was not that easy, nor was determining when it was finished cooking. And, breaking it apart is a little dangerous. Cook’s note: praline is sharp; don’t try to break it with bare hands. You will get cut.

The other keys to safety for this dish: wash the fruit well, be careful with the knives, and let the adult attempt to light the pan on fire. The kids did a great job of trimming the fruit, I helped out by cutting out the sections, and we kept the peels and membranes for compost.

Everything was going very smoothly, until I realized that they were late for their next class. Between asking them to do the dishes and asking them to clean the countertop, I tossed the margarine and brown sugar into a pan. My misstep was to pour the citrus juice into the pan along with the fruit segments. What resulted was a lovely pulp soup, until I dribbled in the rum. Then, it was rum pulp soup.

The hilarious part was trying to light it on fire. To call that a failure would be generous; the kids were convinced I was going up in flames, though, and smartly stood away from the stove. We joked about finding the fire extinguisher, but luckily, the matches were blown out by the steam rising from the pan. None of the kids wanted to try it, except for the pralines, but one wanted to take some home for his dad.

The lesson here is clearly one for me, and not the kids in my class. Time management is a great idea in the kitchen; know your skills, your ingredients and your equipment before getting started. I can’t wait to try again, and find someone who knows how to light a flambé to do it with me!

1) Brush a baking sheet lightly with oil. Place the granulated sugar and nuts in a small, heavy saucepan and cook gently, swirling the pan occasionally, until the sugar has melted.

2) Continue to cook over fairly low heat until the nuts start to pop and the sugar has turned a dark golden color. Pour onto the oiled baking sheet and set aside to cool. Using a sharp knife, chop the praline into rough chunks.

3) Cut off all the zest and pith from the citrus fruit. Holding each fruit in turn over a large bowl, cut between the membranes so that the segments fall into the bowl, with any juice.

4) Heat the butter/margarine and brown sugar together in a heavy frying pan until the sugar has melted and the mixture is golden. Strain the citrus juices into the pan and continue to cook, stirring occasionally, until the juice has reduced and is syrupy.

5) Add the fruit segments and warm through without stirring. Pour Cointreau over and set it alight. As soon as the flames die down, spoon the fruit flambé into serving dishes. Scatter some praline over each portion and decorate with mint. Serve at once.

Miriam Leibowitz is a vegetarian, avid gardener, long-time home cook, Jewish Organizing Initiative alumna, and Director of Sales and Marketing for SOVA Catering, one of Nashville’s three kosher catering companies. When she’s not teaching, Miriam is working to bring affordable, healthy food access to Nashville’s food desert neighborhoods, rebuilding relationships between the African-American and Jewish communities in Nashville, and serving on the steering committee for the upcoming Cultivating Healthy Communities of Faith Summit.