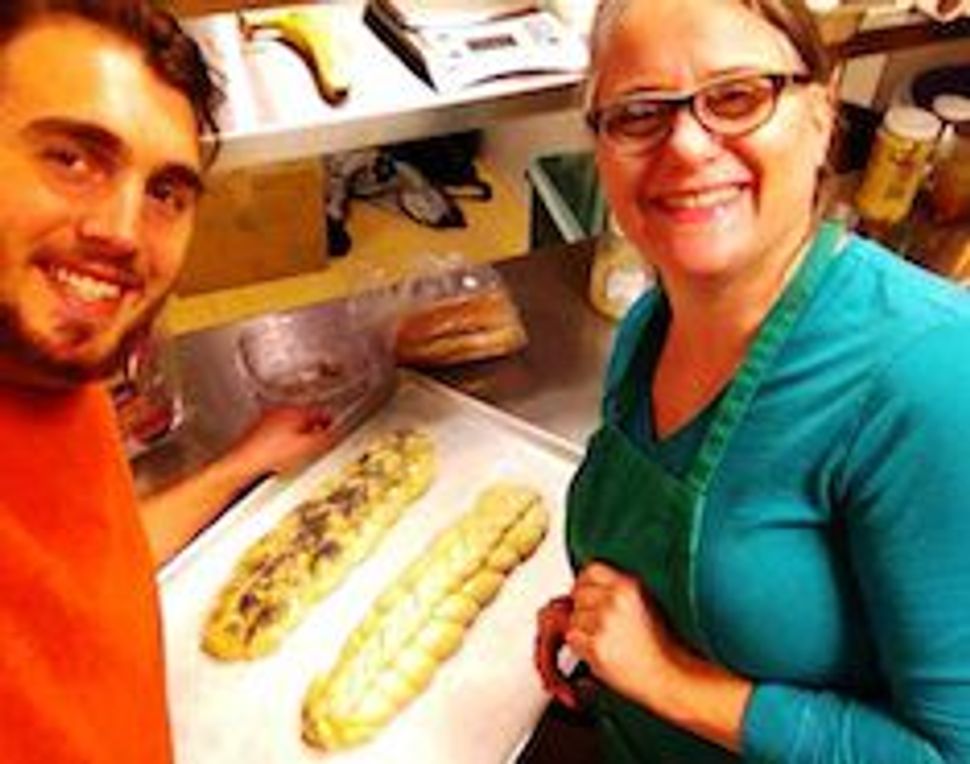 Image by Photo By Laura Rumpf

A chance encounter last summer in the produce section of the vegetarian co-op Rainbow Grocery proved to be the catalyst for a rich culinary mentorship blossoming at 12 Tribes, a Bay Area kosher catering operation headed up by the legendary ‘Rabbi Chef’ Becky Joseph.

Jordon Daugherty, a transplant from the great Midwest, and at 24, the newest addition to the 12 Tribes team, remembers the meeting fondly: “She helped me understand a good green bean,” recalls Jordon. Standing amongst bins of deliciously greens, swollen figs, and tomatoes, Becky invited him to visit the 12 Tribes kitchen at the JCCSF, and soon thereafter, offered him a one of a kind apprenticeship.

Jordon has now been with Becky since August of 2011, and is soaking up every ounce of wisdom that Joseph and her expert culinary staff have to offer. “What inspired me about 12 Tribes, it could accommodate a curious learner like me alongside seasoned pros,” says Jordon.

Jordon grew up in quite a different environment from the urban foodie capital known in the Bay. He spent most of his childhood in the heartland of Southwest Kansas, where, he says, “time stretches out like the acres of wheat and milo into the horizon.”

“We ate simply, not too colorfully,” says Jordon. “Lots of barbecue, casseroles, and roasts. It wasn’t uncommon to eat something we or one of our neighbors had grown or raised.”

“This is my first formal kitchen experience working at this level of well-styled menus, seasonal ingredients, and professional practices,” Jordon explains.

His background harmonizes well with Becky’s own diverse background, which is peppered by years spent working abroad, in Indonesia, and in kitchens around the country. The fusion makes for a passionate environment in this kitchen that is no laughing matter. “12T isn’t casual, we work we cook we love it…” says Jordon. “The kitchen has been known to blast a little Neil Young, or even a little Klezmer, which has been known to get the mashgiach dancing”

One key emphasis of 12 Tribes that Jordon has taken to heart through his apprenticeship has been the importance of caring for the local community in which meals are served, and holding oneself to high ethical, as well as edible standards.

12 Tribes latest ethical endeavor is to be the first kosher caterer in the city of San Francisco to get certified by Tav HaYosher a local, grassroots initiative to bring workers, restaurant owners, and community members together to create just workplaces in kosher restaurants.

“For me,” says Jordon, “this has been a more enlightened eating experience focused on kosher practices. I’ve become more mindful in preparing for others, and I sense I am giving more than just food to those I cook for. As a child we didn’t keep kosher, recite bracha, or really have too many family meals beyond holidays. It’s a new thing to feel this gratitude toward consumption.”

There’s no question this is only the beginning of Jordon’s culinary journey with 12 Tribes, but he still counts his earliest days there among his fondest.

“One of the first visits I made to the kitchen, Becky showed me how to make bird-shaped challah,” he recalls. “We had a blast. By the end I had made an alligator green, with teeth and all. I think ‘having fun’ should be a rule for every kitchen.”

Laura Rumpf is the Program Associate for Intergroup Relations and Legislative Affairs at the Jewish Community Relations Council in San Francisco.