What Drives Our Interest in Food Justice? 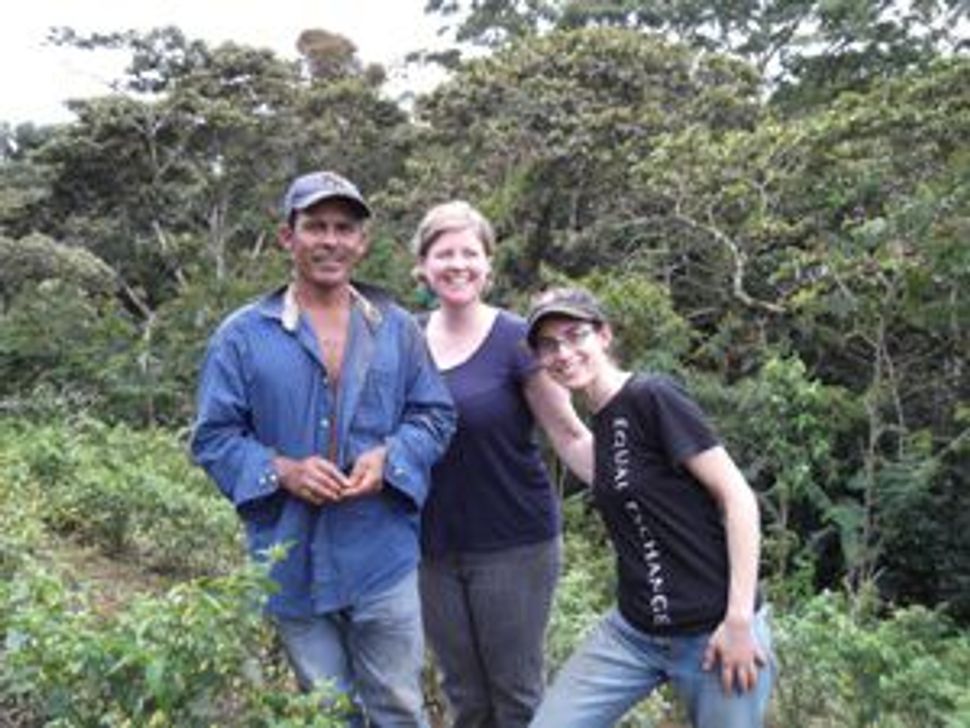 Equal Exchange worker-owner Molly Zeff in Nicaragua with a co-operative?s farm partner and one of their faith-based partners from the Presbyterian Hunger Program. Image by Molly Zeff

When is the last time a complete stranger asked you to tell your personal story explaining why you care about a political or social issue?

As part of my job as a community sales representative at Equal Exchange, I ask customers, who are, for the most part, strangers, to share their personal stories all the time. Why are they spending their limited time on Fair Trade, promoting the programs of our worker-owned co-operative? Why do they care so much about the farmers growing our food?

During phone calls, customers I’ve never met in person share stories of deeply humbling international trips to visit coffee farmers; stories about their grandfather, a small-scale tobacco farmer, being taken advantage of by a large agribusiness; and stories about the first time they heard a news report on the widespread use of child slaves in the cocoa industry.

These unique stories led to the same conclusion: The people who grow our food deserve higher wages and more humane treatment.

Interestingly, these customers did not explain their choices as stemming from a sense of basic human decency, or from religious or ethical values, though I have no doubt that many of them do hold such values very highly. However, many people who share these values don’t act on them. Even people with high moral standards generally do not necessarily apply their values to sourcing their food: where it comes from, who grew it, whether pesticides were involved, and so on. I believe it is the alignment of our theoretical morals with a personal story that moves people from theory to action. By understanding how our own stories relate to the stories of the people who grow our food, we can find a personal connection that drives us to change our choices about the food we eat.

So, I’ll start with my own story. As you read it, ask yourself: what’s my story? What could drive me to not simply care in theory about the well-being of the people growing my food but to act on this value?

In thinking about why I sought work in Fair Trade, I remember Rambam’s highest level of tzedekah, one of the few useful remnants of knowledge from my Hebrew school days: “The highest level of tzedekah (“justice;” often translated as “charity”) is when you support someone by giving him-a loan, or entering into partnership with him, or create a job for him so that he supports himself until he no longer needs to depend upon others.” This Jewish value was a factor in my career choice. While many kids were taught that value, few ended up working in Fair Trade or similar fields. While I believe Jewish values in the Torah and Talmud and other texts about how to treat the poor and especially how to treat workers, it’s my story that causes me to act on those values.

Why did I skip the post-college management consulting route my mom urged me to consider and end up working at Equal Exchange, doing sales and education with congregations and schools? Why am I here working on our partnership with American Jewish World Service and, encouraging Jews to bring Fair Trade products to their synagogues?

My story takes us back to my grandpa, Daddy Ivan, a second generation American whose grandfather emigrated from Russia seeking a better life. Ivan Miller inherited an immigrant work ethic and a “talent” for worrying frequently about money even when things were going fine. This concern only worsened when, as a married man and father, he took on responsibility for his sister and her family when her husband died. Ivan also took out a home loan and moved from small town Sherman, Texas, to the big city of Fort Worth, after receiving an offer to start a family department store in exchange for 30% ownership.

Upon reaching Fort Worth, his family cheated him by lowering that share to 15%. Although he eventually became a successful company president, the move from a small town and the experience of being ripped off by his own family were extremely difficult on his wife, my grandma. She became depressed and didn’t recover for years. My mom did not inherit her mother’s depression, but she did “inherit” her father’s persistent worries about money.

L’dor v’dor, as we say; “From generation to generation.”

This immigrant mentality of worry over money meant that I spent my youth and now my adulthood hearing my mom’s reminders that I need to “feed my face and get health insurance.” My mom continued to worry about money long after becoming financially stable. Her constant sense of economic insecurity fueled in me a passion for economic empowerment, so that people living in poverty would, as the Rambam says, “no longer need to depend upon others.”

Fair Trade was an obvious fit for me — at its best, Equal Exchange’s work ensures that farmers growing our food don’t have to worry about earning enough money to feed their kids and send them to school.

Fair Trade is a fit for me because of my story, and I believe every person has a story that could drive their interest in food justice and Fair Trade…once you discover that story.

Now it’s your turn to think about your story and act on it. What in your background resonates with Fair Trade? Farmers? Economic empowerment?

When you understand your story, I hope it drives you to buy food, and to convince your community to buy food, that reflects the values we may already share anyway.

Molly Zeff is a worker-owner and Community Sales Representative at Equal Exchange, a co-operative that partners with over 40 small farmer co-operatives to bring Fair Trade coffee, tea, chocolate, and other products to the United States. Molly does education and sales with congregations of many faiths as well as schools. She has a background in curriculum development, event-planning, and working with at-risk teenagers in both Boston and Accra, Ghana, where she worked as a Fundraiser at an NGO called Street Girls Aid.

What Drives Our Interest in Food Justice?