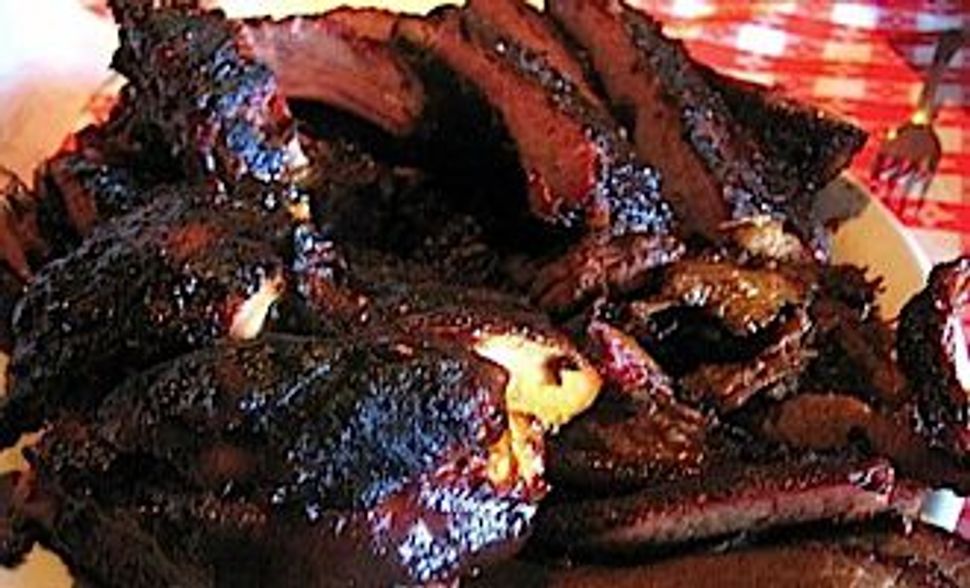 Image by Courtesy of Ari White

A little piece of Texas has landed in the Bronx. Ari White, owner of Gemstone Catering, is dishing out slow-cooked brisket, pulled barbecue chicken sandwiches, kosher baby back ribs (using veal instead of the traditional pork), and much more at his Texas Smokehouse BBQ Pop-Up restaurant in Riverdale this week.

White has set up two tents — one housing buffet-style food (served by members of his staff), and the other with long, country-fair-style picnic tables along with a drinks and dessert table featuring sweet tea, Texas-sized chocolate chip cookies and peach cobbler (pareve of course). The down-and-dirty parking lot setting feels just right.

White, who is modern Orthodox, is well-known in the New York-area shul kiddish community for his Texas-style cholent (in which smoked ribs and brisket take the place of stew meat). And earlier this year, he won first place in the ribs competition and second place for his brisket at the Long Island Kosher Barbecue Championship, competing under the team name, “Smokin’ for Life.”

The idea for the pop-up came from a suggestion on Chowhound. “Lots of people responded to that post urging me to open something. “We felt this was a five-day compromise,” he says. And two days in, the pop-up has already fed 1000 diners hungry to try a taste of his ‘cue.

Introducing “Yankees” to true, authentic Texas barbecue is White’s passion — he’s from the west Texas town of El Paso. “What they describe as barbecue” — the type usually done in the backyard and involving hot dogs and hamburgers — “is actually grilling,” he says. To give his meat that authentic Lone Star State treatment, White slow smokes it. “We’re smoking around the clock,” he says, “we start at dawn.”

On the pop-up’s opening night, White says the slow-smoked brisket (1/2 pound platter, $20) seemed to be most popular, but on the event’s Facebook page, the pulled chicken and pulled brisket sandwiches ($10 and $12 respectively) topped with slaw and pickles seem to be garnering raves (the brisket is a take on the traditional pulled pork sandwich popular in non-kosher barbecue).

I really enjoyed the pulled chicken sandwich and the barbecue chicken ($16-$22), but thought the ribs and brisket were a bit too heavy on the barbecue sauce. But we’ll forgive them considering it was the first night out. Sides like baked beans, corn bread and slaw rounded up the meat-heavy platters.

For those who can’t make it to the pop-up event, White offers all of his Texas-style ‘cue for catered events, plus he drop-off service for that famous cholent. But don’t expect a permanent restaurant anytime soon. “I had some humble beginning in the restaurant business,” he says of a small hole-in-the-wall spot called Ari’s Gourmet Kosher Delicatessen, which he opened in Washington Heights and then shuttered two years later. “We deep fried everything and were open until 2 a.m.”

And, while White is undeniably passionate about true Texas-style barbecue, his wife is not. “I like to describe her as a militant vegetarian,” he says, adding that he often has to keep his barbecue-smelling clothes away from her after a long day of smoking meat. “The combination of beef carnage and bonfire is not great on the vegetarian pregnant woman’s nose,” he says with a laugh.

The Texas Smokehouse BBQ Pop-Up will run through Thursday, August 9, from 4-10 p.m. in the parking lot of the Riverdale Temple at 4545 Independence Ave. For more information, visit their Facebook page.