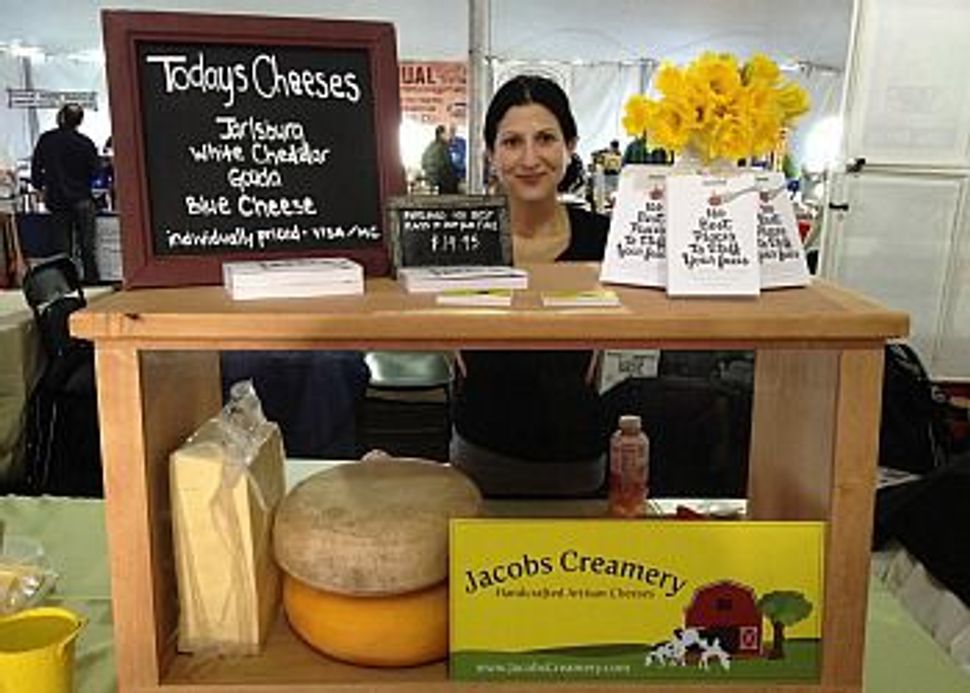 With a wink, Lisa Jacobs likes describing herself as “the world’s only Irish-Jewish cheesemaker.” But that unorthodox distinction is just one facet of her unlikely ascent from frustrated law student to artisan-dairy star.

In just five years, her Jacobs Creamery has gone from sneaking cheese production off-hours in a rural Oregon milk-bottling plant to churning out 600 pounds of the stuff every week — and finding fiercely loyal fans at farmers’ markets across Portland. “My first batch of cheese was Havarti, mainly because my dad liked it,” she laughed. “But I sold all of it.”

Today, her offerings include exquisite ricotta, crème fraiche, farmer’s cheese and fromage blanc, along with dairy-based puddings and panna cotta. Jacobs voice rises as she describes each variety in almost sensual detail. “My blue cheese is exceptional, and I’m not even a blue cheese fan. My crème fraiche is like a farmstead sour cream you’d find in Eastern Europe,” Jacobs said. “My butter is a European-style cultured butter that I hand-churn. And there’s a bloomy cheese that’s exceptionally smooth and creamy. Its flavor layers change as it ripens.”

Born in Dublin, and now based in tiny Chehalis, Washington, Jacobs has food-love in her blood. Her maternal grandmother, Myra Gruson — who still lives in Dublin — would make homemade cream cheese whose recipe still influences Jacobs’ fromage blanc. Her parents, Irish-Jewish immigrants Michael and Rhona, run The Smokery, a beloved Portland purveyor of smoked fish prepared with traditional Irish recipes. They sell fish from a stand next to Lisa’s at a Portland market. But they’re not involved in the business. “I have Jewish parents. They always have opinions,” she laughs. “My mom and dad are not my first tasters. They’re a little too critical to expose cheese to in early stages.”

Michael, a technology marketer, and Rhona, an educator, have held onto their day jobs while they run the fish business. Lisa Jacobs, however, has made Jacobs Creamery her full-time occupation — literally. “On a typical day, I get up before 4am. I get very little sleep, and don’t do much aside from preparing, packaging, and affinage” — the care and maturation of cheese. “But deep down in every single cell of my being, I love it.”

After dropping out of law school in 2003, Jacobs was running a search-engine advertising business with her then-boyfriend. When she decided to split with her partner in 2005, “I wanted to be self-sufficient. Part of the intrigue of starting my own business was being able to get out of running the business with him.”

Jacobs happened to read a book (she can’t recall the title) about a family living off the land in Switzerland or France, and a grandmother teaching her granddaughter how to make cheese. Inspired, she set out to learn how, landing at the New England Cheesemaking Supply Co. in Ashfield, Massachusetts. “I loved the class,” she said. “And when I headed back West, I pretty much decided to open a creamery. But I had no idea what was involved.”

What she faced was a byzantine bureaucracy of certifications and licenses, and hugely expensive capital requirements for equipment. “So I thought, maybe I’ll start my own creamery, but use someone else’s licensed facility. It was not a common arrangement.”

Her first batch of cheese happened by accident. “The facility where I leased space was a milk bottler. One day, they got some water in a huge batch of milk, which means you can’t sell it. But you can make cheese with it. So the guy called and said, ‘We have a thousand gallons. Come make cheese.’”

Ever since, her business has blossomed. Jacobs now leases a forty-acre cheesemaking facility on a farm whose previous operators retired. She maintains an exclusive partnership with a local dairy farm for “high-quality” milk that enhances the flavors of cheeses. And Jacobs told the Forward she’d just made a presentation to a group of investors who may help her purchase her farm, which would mean a larger distribution network.

Has Jacobs considered kosher certification? “I’ve talked with some rabbis who do the process,” she said. “Since I’m not a large-scale producer, and I’m not in a heavily Jewish area, the benefit doesn’t balance the costs.

In the meantime, Jacobs still sells cheese at the Portland Farmer’s Market at Portland State University from a stall next to her parents’ Smokery stand. In warmer months, with help from part-time staff, her network of markets expands to 12 across Oregon.