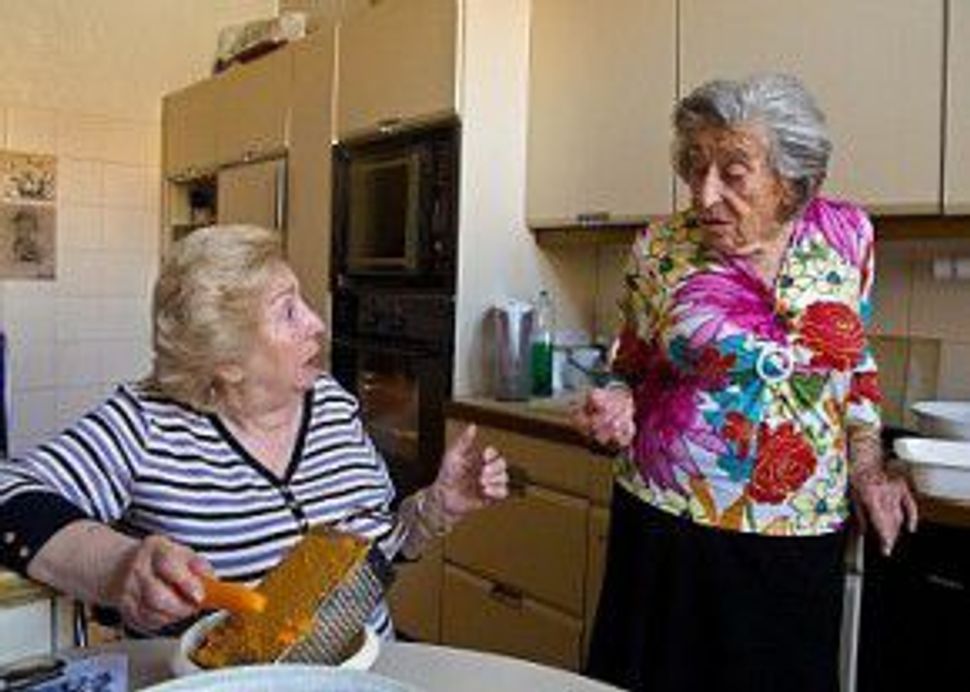 Cooking Together: The amazing women behind the Oma and Bella cookbook. Image by BELLA LIEBERBERG

From our eight favorite books from the year — one for each night of Hanukkah — we present two below. They are all great holiday gifts for the passionate cook in your life or a treat for yourself. Check out the other books on our list from days 1-3.

Oma & Bella: The Cookbook
By Alexa Karolinski
Self published, 120 pages, $36

Alexa Karolinski, a filmmaker and Berlin-native, had the idea and chutzpah to produce this whimsically-illustrated cookbook of traditional Eastern European dishes. But the recipes themselves are all Oma and Bella’s — two feisty women, both Holocaust survivors (one of whom is Karolinski’s grandmother), who live, cook, and kibbitz together in their shared Berlin apartment.

Karolinski created the cookbook as a companion piece to her independent film Oma & Bella — a 76-minute tribute to the women’s lives and history as told in and through their kitchen. Similarly, the recipes, which range from challengingly old-fashioned dishes like jellied calves foot, pickled herring and boiled tongue, to the more universally-appetizing veal brisket, carrot tzimmes and rugelach, serve as an entree into Oma and Bella’s lives. “Having lost both of their families in the Holocaust, Oma and Bella had to teach themselves, often from scratch, how to make the dishes their mothers and grandmothers made for them.” Now, thanks to their generosity and Karolinski’s patience and diligence (she spent three years watching the women cook, translating their “handfuls into half cups, pinches into teaspoons, and platefuls into servings,” 38 classic dishes are now available to the next generation.

If you make a recipe from your bubbe’s bubbe’s bubbe’s time in the shtetl, it’s likely that the recipe made it to you by way of your matriarchs, not a written recipe. Cookbooks, particularly Jewish ones, were rare until relatively recently. The first Jewish cookbook in America, which was only the second published in English, was registered with the Library of Congress in 1871. Authored by Esther Levy, an English store clerk living in Philadelphia, the “Jewish Cookery Book” contains short recipes (without measurements, as was common at the time) for meat, fish and even cheese. Levy included instructions on setting a table and selecting ingredients — “to assist European immigrants new to American kitchens and society.”

While many of the recipes are somewhat out of date, a facsimile of the book which was re-released this year is fascinating. Flipping through it lets the reader peer into the kitchens of early American Jews to see what they ate daily and on the holidays. You might even recognize a couple of the dishes. As cookbook author Joan Nathan comments in the foreword, “in may ways [the book] feels modern but is also a reflection of the past.”