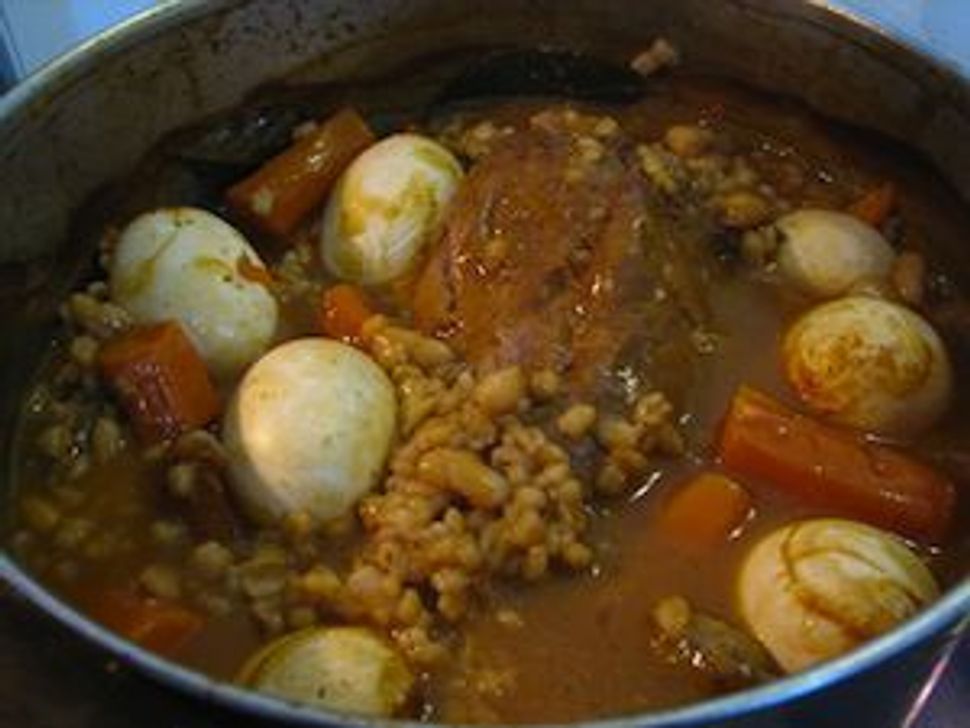 With a population of nearly 2.5 million people, half of whom were born outside Canada, Toronto is the most multicultural city in North America, and one of the most multicultural in the world. You can travel around the world in one weekend without ever leaving the city. Some ethnicities even have multiple ethnic neighborhoods. A short 5 ½ mile walk will take you through four ethnic neighborhoods.

Years ago I had a non-Jewish roommate of Ukranian and Austrian descent who grew up eating borscht, cabbage rolls and other eastern European foods. Until I introduced her to kosher dills, she ate Polish pickles. We lived in a polish neighborhood where the European delis reminded me of my childhood.

Ask a Toronto Jew about their ancestry and you’ll probably get an Ashkenazi answer: Eastern Europe. Thus it seems likely that the Toronto Jewish food scene is influenced by immigration mixed with local flavor. This brings me back to cholent, one of many dishes historically invented by Jews in the old country. From what I gathered from my conversation with Wex, cholent is the grandparent of North American Jewish food. Observant Jews invented cholent centuries ago so they could have a hot meal on Shabbat. The ingredients were assembled in a pot before sundown on Friday and delivered to the town bakery where it would cook slowly overnight in the bread ovens and retrieved after Saturday morning services.

Other Jewish foods developed inside cholent. Kishka was placed on top of the assembled cholent and cooked overnight in the same pot and although I haven’t seen this as fact, I suspect that cabbage rolls were made in a similar manner.

Stuffed cabbage entered Jewish cooking 2000 years ago. Names, recipes and preferences vary based on geography. For example, the holishkes that my mother grew up with would have had a savory sauce, while my former roommate’s Ukranian holubtsi would be sweet and sour. In a city of immigrants, homeland food had a place on tables in Toronto homes and beyond their walls.

Modernizing the deli The history of deli food is an immigration story itself with German origins. If you’re a New Yorker or live in another big American city, you might recognize what the story I’ve been telling about immigration and multiculturalism. If you’re a regular reader of the Jew & the Carrot, you know the story about the rise, fall and evolution of the deli.

Like New York, Toronto has experienced some of the deli turnover. Just last July, Marky’s Deli closed after 43 years in business.

However, I declare that the deli isn’t dying, it’s changing and adapting to modern times. Call it The Deli Darwinism (and credit me), today’s deli is influenced by its origins while evolving with time and food trends. Toronto’s Caplansky’s deli, established in 2008, has played a major role in this evolution. In an article previously published, on this website, Save the Deli author David Sax is quoted as saying that “Caplansky’s did more to put Toronto on the map as a deli city than anyone else in half a century”.
Why? A modern update to the traditional deli foods, merging traditional with current food trends, and giving “deli” some local influence.

Caplansky’s moved into the food truck business in 2011. Toronto is a few years behind on the food truck trend and Caplansky’s got in near the start of the food truck revolution. The truck menu offers trendy maple “bacon” doughnuts, made with beef bacon that’s also on their restaurant menu.

Combining deli with Canadian (Quebec) culture, Zane Caplansky’s smoked meat poutine is one of the most popular menu items. Combining Canadian culture with United States culture, Caplansky’s “maple dipped fried chicken” is reminiscent of chicken and waffles, which some say originated in the southern States. Meanwhile, real maple syrup is truly Canadian. I sometimes joke that we bleed maple syrup. In linking traditional deli with modern food trends, Caplansky’s has a position outside the traditional “deli” definition too.

For example, Toronto has seen an influx of barbecue restaurants, some of which, such as Barque Smokehouse, were opened by Jews. While North Americans typically wouldn’t associate “barbecue” with “deli”, barbecue and deli are close cousins.

Want to learn more? Michael Wex will be speaking at the Shoresh Food Conference next Sunday, January 27 where other sessions include an exploration of Jewish agriculture and a look at animal sacrifice in the Torah and how it shaped meat consumption. Wex’s new book about the food history of Toronto is scheduled to be released by Scribner in fall 2013.

Andrea Toole is an Ashkenaz Toronto Jew, an adventurous eater, a barbecue competitor who has eaten barbecue in the South, and a freelance writer. Read about these things in her food blog Andrea the Gastronaut.