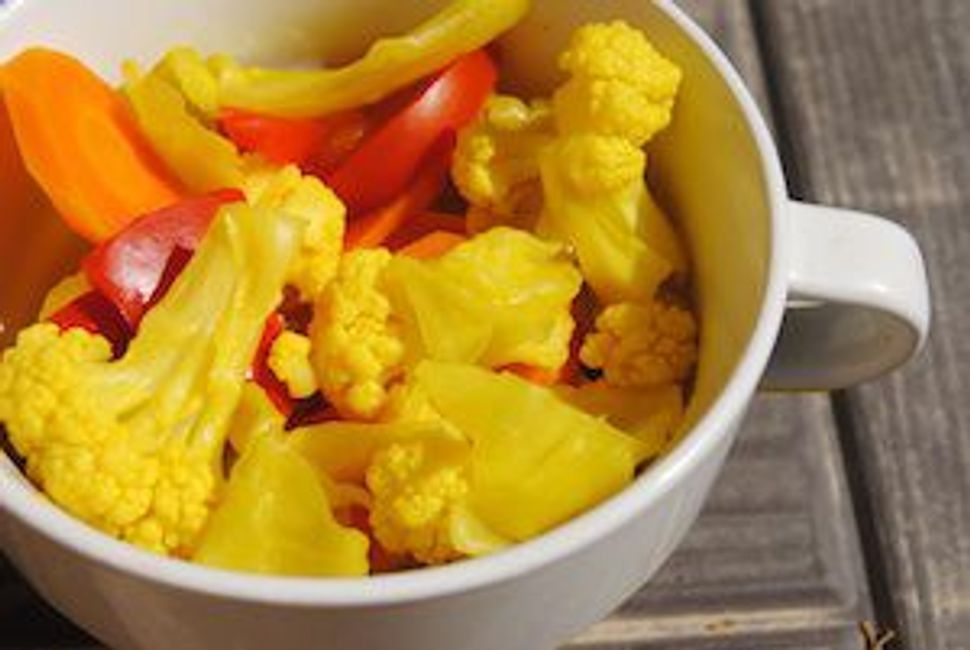 I am not a picky eater. I attribute it to my grandmother – a glamorous and persistent Persian, Jewish woman – who, through ingenuity and wisdom, somehow persuaded generations of children to drink salty, carbonated yogurt (doogh) and eat foods that “touched,” like white rice smothered in an ominous brown sauce (khoresht-e fesenjoon). Although, it wasn’t always easy to be the kid at summer camp whose parents packed “weird” leftovers for lunch, the food was never boring. But it wasn’t meaningful either.

When I moved to Israel after college, I discovered that it wasn’t just my family who ate this way. Indeed, food seems to be one aspect of “life in the old country” that no Jewish community dared to leave behind on the trek to Israel. Children all over the holy land had “strange” ingredients in their school lunches but didn’t point to an arduously prepared dinner and say, “Ew, Mommy; it looks dirty,” like my brother did as a child. On the contrary, it wasn’t unusual to be seated beside a young kid at Ima Kubbe Bar feverishly shoveling an ancient recipe into his tiny, kid mouth. Wandering through the Machaneh Yehuda market (“the shuk”) in particular was like a passport to “our peoples’” dining table, for in the market, I could eat breakfast as a Tunisian, lunch as a Baghdadi and dinner as a Pole. The market vendors increasingly began to feel like family and the foods launched me into wholly different generations, countries, and Jewish peoples. And I never looked back.

Food took on a whole new meaning in my life. It became my entire Friday morning, preparing challah as I imagined the stranger whose recipe I adopted, wondering if she was kneading her dough as I was kneading mine and whether she was “crying into it,” an ingredient her recipe calls for. It became preparing and cooking rice the same way my great-grandmother did in Iran more than eighty years ago, feeling the same things she felt as wet grains washed over my fingers and the jubilant relief when a glorious, crunchy, perfectly golden tahdiq unhooked from the bottom of the pot.

The shuk is just one example of how there is not one way to define Jewish food. It is so much more diverse than bagels and matzo ball soup. Sometimes Jewish food draws from poverty or luxury, reflects nomads or urbanites, sometimes it tastes like bitterness and sometimes it tastes like triumph. But the one common element is that Jewish food always connects us to our heritage and brings all our varied Jewish communities together. The Hazon Jewish Food Festival will do just that. Under one roof, for one day, the flavors of the Jewish Bay Area will marinate with extraordinary vendors, session leaders, and participants. Together, we will learn haroset recipes from around the world, about the Hebraic practices of beer-making, and also delve into the relationship between Jewish food ethics and our modern-day food system. I anticipate that the Festival’s shuk will also inspire in you the same cultural exploration of the Jewish Bay Area that the Machaneh Yehuda market inspired in me several years ago. In particular, it is my hope that after the Festival, you will remember that when you walk into the kitchen, you aren’t alone. You bring with you the ingredients, recipes, and wisdom that our people have clutched tightly to their chests for generations.

My grandma’s dishes are not easy to replicate – mostly because her instructions include phrases like, “just a pinch of this…” or wholly leave out essential ingredients. It’s frustrating because my favorite comfort food is her eslamboli polow, or simply “tomato rice” in our family. For years, watching her bring out platters of rice dishes, meats, stews, greens, nuts and dried fruit, I always assumed that tomato rice was a complicated feat that only “real” Persian chefs could master. It wasn’t until later that I caught her in the kitchen squeezing a bunch of ketchup into the rice cooker. Though astounded at its simplicity, I can now eat tomato rice whenever I want. So, come to the Festival, connect with your community, and see for yourself what’s actually happening in the Bay Area’s Jewish Kitchen.

Lauren Wilner is a law student at UC Hastings College of the Law. She writes a food blog called MyJerusalemKitchen, and is on the planning committee for the Hazon Jewish Food Festival.