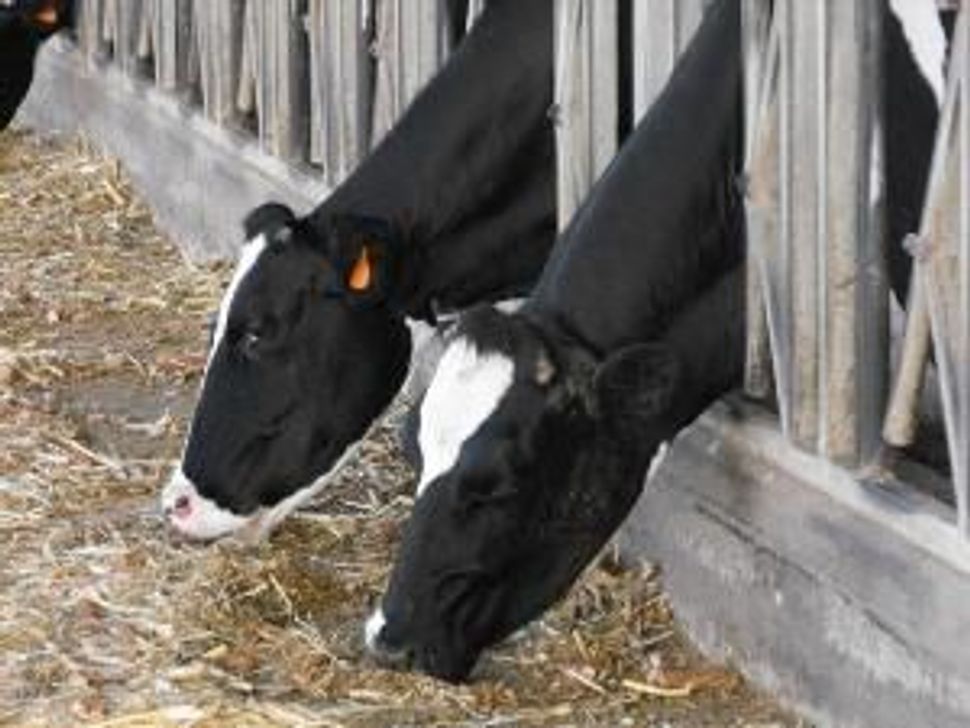 Tnuva, the giant Israeli food company, made headlines this week with an admission that was stunningly candid, if not exactly a revelation.

In documents filed in Jerusalem District Court, Tnuva admitted that the slaughter of farm animals, if exposed to public view, “would horrify most meat-eating consumers.”

It’s one thing for Paul McCartney, the former Beatle, to famously say, “If slaughterhouses had glass walls, everyone would be a vegetarian.” McCartney, after all, has become a leading advocate for the compassionate treatment of animals.

But for a supermarket chain, for a business that sells meat, to say something of a similar vein … Well, that’s big news.

As reported in Ha’aretz, the admission came as Tnuva attempts to stave off class-action lawsuits that stem from an undercover investigation into its Bet She’an slaughterhouse. Video from the investigation, aired on Israel’s Channel 2, showed a variety of shocking abuses, including scenes of animals that were still alive and conscious while hanging upside down after a shochet had slit their throats.

Two attorneys are seeking class-action status for Tnuva customers, arguing that the shoppers incurred emotional damage after seeing the abuses at the Tnuva Food Industries kosher slaughterhouse. Tnuva, in its response, says in essence that the suffering of animals is inherent to meat production, and that consumers have no reason to assume otherwise.

“Slaughtering by its very nature causes the animals great suffering,” Tnuva stated. Yes, even in a kosher slaughterhouse.

Tnuva elaborated: “There is no reason to assume the claimed damage of ‘profound shock, anger, repugnance and sadness’ would not have been caused to consumers even if what had been documented and broadcast had been the usual, violent procedure in accordance with the regulations concerning the animals at the time of their slaughter, the legality of which is not in dispute.”

The Tnuva court filing describes the slaughtering process in some detail, then concludes: “It is indisputable that broadcast of a film documenting these actions ‘proper under the regulations’ would horrify most meat-eating consumers, even though this is absolutely legal behavior.”

In the meat industry, any reminder that the product is connected to the suffering and killing of animals is avoided to the utmost.

Slaughtering is conducted in huge, windowless buildings, usually located in small towns, far from urban centers. And even before slaughter, the vast majority of farm animals – particularly chickens and turkeys – are confined in crammed warehouses, deprived of sunlight and fresh air for their entire lives. “This is exactly the sort of information consumers want to be concealed from them, so as to enable them to enjoy the product while repressing the thought that their enjoyment entails causing suffering to a living creature,” Tnuva stated.

It’s hard to imagine an American supermarket chain or meat producer being similarly candid, even as part of a legal strategy. But that’s another story.

What Tnuva is saying, in so many words, is that eating meat is inconsistent with our inherent sense of compassion and concern for the welfare of animals.

Even eating kosher meat, as Tnuva points out, does not resolve this tension. The problems inherent with contemporary kosher slaughter could fill a book, but to suffice it to say that the assembly-line, industrial-speed style of killing in modern slaughterhouses is not exactly what the rabbis of the Talmud had in mind. In the Tnuva case, one of the attorneys representing the customers presented rabbinic rulings stating that the infliction of unnecessary cruelty on animals would render their meat unkosher.

That may be true on paper. But in reality, the laws of kosher slaughter do not address the abuse of animals before they arrive at the slaughterhouse. And undercover investigations, like those at Agriprocessors in Iowa or at Tnuva’s facility in Bet She’an, have shown that the slaughtering process itself still imposes suffering. Ultimately, consumers do have the power to align their values with their food purchases. That entails bypassing the meat section of the supermarket.

Jeffrey Cohan is the Executive Director of Jewish Vegetarians of North America and the blogger behind The Beet-Eating Heeb.