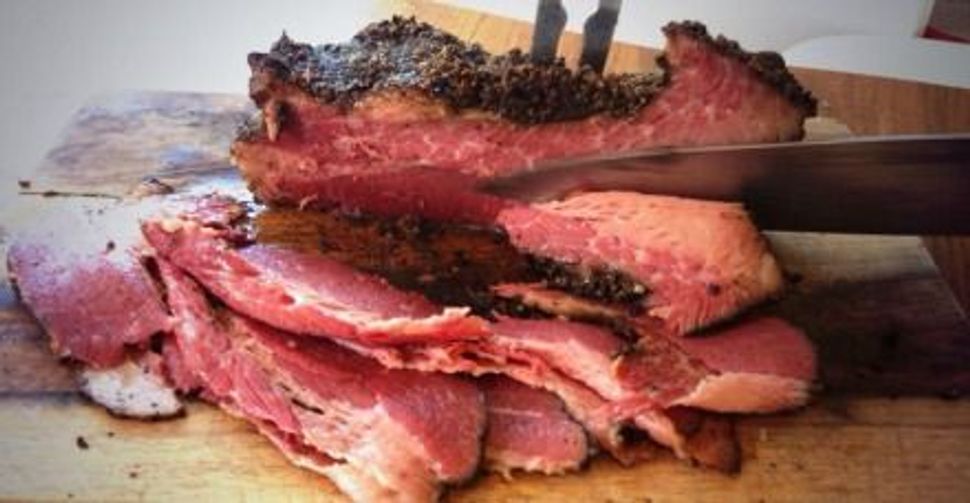 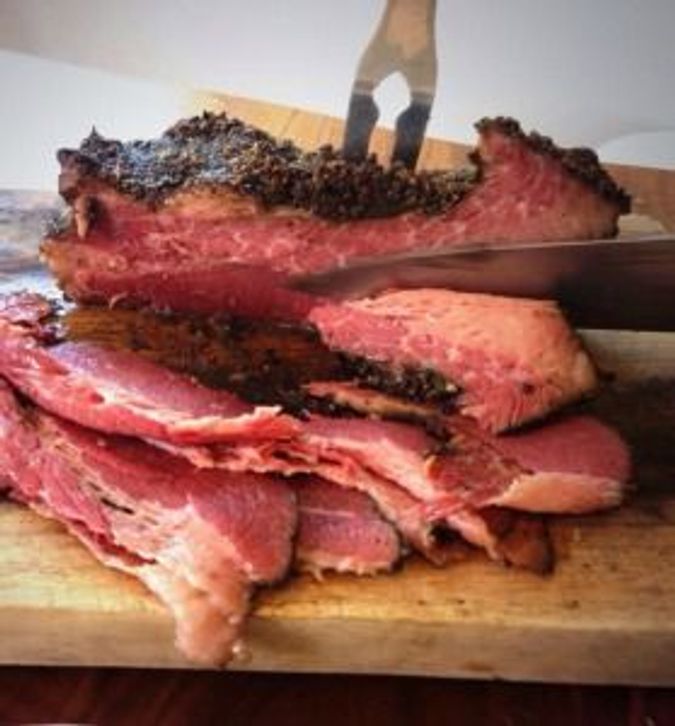 Some people will go to amazing lengths to enjoy Montreal smoke meat, a sort of cross between pastrami and corned beef.

Alexei (Lex) Gopnik-Lewinski used to smuggle vacuum-packed smoke meat (also known as smoked meat) across the border every time he would come home to Berkeley, California after visiting family in Montreal. Then, one time two years ago, he was busted by customs as he tried to cross the border with 15 pounds of the stuff.

“They confiscated $150 worth of smoke meat!” Gopnik-Lewisnki exclaimed. “That was it. It was at that moment that I decided I had to learn how to make it myself.”

A musician and broadcaster by profession, Gopnik-Lewinski, 35, faced a steep culinary learning curve. However, by the way his Augie’s Montreal Smoke Meat (named for his young son) has been tickling people’s taste buds, it would seem that he is a quick study.

Blake Joffe and Amy Remsen invited Gopnik-Lewinski to do seven smoke meat pop- ups in August and September at their Beauty’s Bagel Shop (they do Montreal-style bagels) in Oakland. Customers were lined up out the door and down the block, buying a total of 1,000 pounds of the newly-minted deli man’s smoke meat. Customers had the choice of enjoying it either in a sandwich on Wise Sons Deli rye bread, or crumbled over traditional poutine. Poutine, a favorite of Quebecers, is French fries topped with a special gravy and cheese curds (and in this case, also some smoke meat).

Gopnik-Lewinski learned the smoke meat-making technique from a friend who is in the business in Montreal. First, you’ve got to find fatty briskets, which can be hard to find. “Don’t forget, in Montreal, people need that extra fat to make it through the harsh, long winters,” he quipped. He trims some of the fat off and uses it as beef tallow to make the fries for his poutine.

Then he dry cures the meat with a spice rub. “Sorry, but the recipe is secret,” he said. The meat is vacuum-sealed in plastic bags and refrigerated for seven days, and has to be flipped twice a day.

The next step is to wash off the cure. “It’s done its job,” Gopnik-Lewinski noted. He immerses the meat in tubs of cold water for four hours, changing the water every half hour. He increased the immersion time from 3 hours after he found his first batches were too salty.

After that, the meat is dried off with paper towel and covered in a special slather (another secret recipe) and rubbed with pepper and coriander. Next, he takes the meat to Jackson Blake Kitchens at the Rock Wall Winery in Alameda and smokes it for three hours. Finally, he wraps the meat in foil and lets it cook for another five hours with the smoke off.

Aware that the way the meat is sliced is critically important, Gopnik-Lewinski—who wears his Montreal Canadiens hockey shirt and hat while serving customers—is working on perfecting his technique. “Fortunately, we can use any crumbles for our poutine,” he said.

Despite his immediate success with his smoke meat, he knows there is much more for him to learn. He’s thinking about interning at Smoke Meat Pete in Ile Perrot, where he would go to get his regular fix back when he was a student at Montreal’s Concordia University. “Up until now, I’ve been freestyling it, kind of like when I was rapping,” he said referring to his days as a hip-hop musician.

As far as Gopnik-Lewinski is aware, his closest competition geographically is a place owned by some ex-Montrealers in Redondo Beach in southern California. Even if it were closer by, he wouldn’t be worried. Many think that Caplansy’s Delicatessen in Toronto is the star of the Montreal smoke meat diaspora. Gopnik-Lewisnki has tasted Zane Caplansky’s smoke meat. “It was pretty close, but I think we have the better product.”

Customers can now buy Augie’s Montreal Smoke Meat by the pound at Beauty’s Bagel Shop. Gopnick-Lewinski hopes to be back to selling his sandwiches and poutine at pop-ups next spring. He believes he’s on his way to becoming a culinary entrepreneur. “I don’t have any business experience, but with everything having gone as well as it has so far, I feel like I kind of have to take this on as a business.”

His passion for Montreal smoke meat is palpable. “It’s the best of both worlds. It’s got the spice of pastrami and the texture and crumble of corned beef,” he explained. “It’s like pastrami and corned beef put on some Barry White, popped open some good wine, and had a baby.”