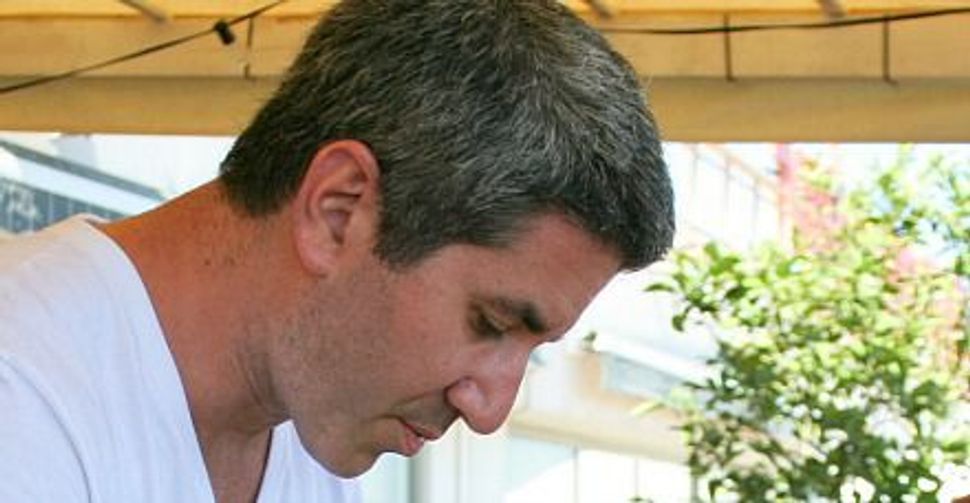 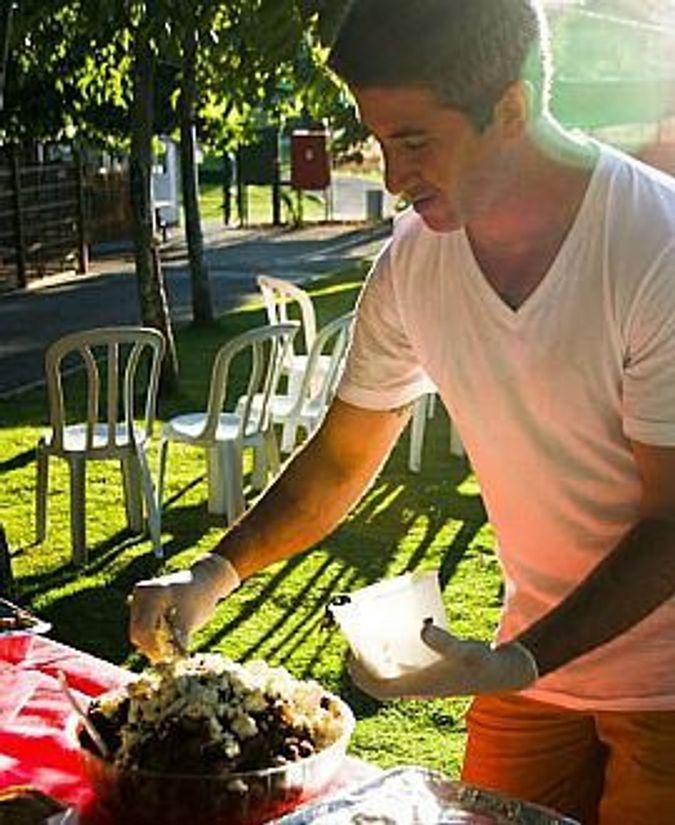 Michael Solomonov puts the final touches on dinner commemorating the 10th anniversary of his brother?s death. Image by liz steinberg

For Israeli-American chef Michael Solomonov, this weekend’s dinner in an Israeli park had been in the making for 10 years – ever since his younger brother David was killed on duty in the Israel Defense Forces.

Michael Solomonov, the owner of Zahav, an award-winning Israeli style restaurant in Philadelphia, was just launching his culinary career when David Solomonov was killed by a sniper just days before he was scheduled to complete his military service. His brother’s death is one of the main factors that pushed him to focus on Israeli food, he says.

A picture of his brother hangs in the room of Michael Solomonov’s 2-year-old son, also named David. The father and son say “good-bye to Uncle David” every time they leave the room, the chef says.

“That ‘good-bye, Uncle David’ thing we say every morning, that’s what we’re doing here tonight,” he told the crowd of 120 at the dinner in the Tel Aviv suburb of Kfar Sava.

Solomonov. 35, was born in Israel to a Bulgarian-Israeli father and an American-Israeli mother, and grew up moving between Israel and the United States. He and his brother had lived on different continents in the years prior to David’s death, but they reconnected a month beforehand.

That’s when Solomonov visited Israel for the first time in four years, “and got to sort of rekindle a very meaningful relationship.” He and his brother spent several weeks together, which happened to include a lot of eating.

Then, on Yom Kippur 2003, shortly before David was due to be discharged, he was killed while patrolling on the Lebanese border, near Metulla. A few months later, Solomonov, then sous-chef at Vetri, hosted a dinner for David’s army unit in partnership with his employer, chef Marc Vetri.

“He always said he wanted to do it again,” said his mother, Evelyn Solomonov, a resident of Kfar Sava, the Tel Aviv suburb where the dinner was held.

The memorial dinner was one evening out of a 10-day food tour of Israel that Solomonov and his business partner Steven Cook organized for seven American chefs, a few other food professionals, and two dozen customers. Many of the travelers said this deeply personal event for Solomonov was the most meaningful aspect of the visit. Attendees that evening included family friends and David’s army compatriots.

Working out of a rented kitchen in south Tel Aviv, Solomonov prepared the meal alongside his team of traveling chefs, including Mourad Lahlou, chef of Aziza, the first Moroccan restaurant to receive a Michelin star; Israeli-American Alon Shaya, chef at New Orleans’ Domenica; and Nate Appleman, chef at Chipotle and a contestant on “The Next Iron Chef.” Also on the trip was cookbook author and Jewish food expert Joan Nathan, who prepared traditional Greek filo pastries for dessert.

The chefs, most of whom were in Israel for the first time, took inspiration from local ingredients in order to make dishes they said they wouldn’t have made at home. Appleman and Lahlou teamed up to make spicy meatballs in a tomato sauce topped with liquid egg yolks, giving it the appearance of shakshuka. San Francisco-based chef Adam Sobel, who cooks at the modern French bistro RN74, worked with Cleveland-based restauranteur and “Iron Chef” contender Jonathon Sawyer to make another dish with strong Middle Eastern undertones: roasted vegetables stuffed with a sausage-based filling and topped with a sauce of labaneh and caramelized pomegranate, ginger and onion. Jason Marcus, who runs Traif and Xixa in New York, prepared a potato salad with tahini, which he conceived of as a musabaha with potatoes instead of chickpeas, while Shaya put guava and avocado into a Jerusalem bagel-based panzanella and Cook made a salad of freekeh with pomegranate.

Meanwhile, Solomonov and his sous-chef from Zahav, Dean Hildebrand, prepared a stew with fennel, chickpeas, tomatoes and grilled eggplant, as well as roasted sunchokes in a paste of sundried cherry tomatoes, dill and cheese.

Landing in a foreign country and organizing a meal like this is not a simple endeavor, Solomonov noted. As opposed to his restaurants at home, where supplies are delivered, he and Cook spent Friday morning visiting suppliers recommended to him by a local chef, stuffing dozens of pounds of meat and fish into the trunk of a taxi. Once prepared, the food was transported from the Tel Aviv kitchen to the Kfar Sava park in the luggage compartment of a tour bus, before being reheated on tiny barbecue grills on the far side of the park in a scene that many of the chefs termed highly comical.

Solomonov spoke briefly at the event, thanking the crowd for attending and describing how his brother’s memory lives with him on a daily basis.

After the dinner concluded, the leftover food was donated to charity and Solomonov boarded a bus back to Tel Aviv. Asked about the significance of that evening, Solomonov was visibly at a loss for words. He said he was happy, and that he felt the event had been important, but was still processing it all.

“It’s a little bit difficult to put a name to what this is,” he said.