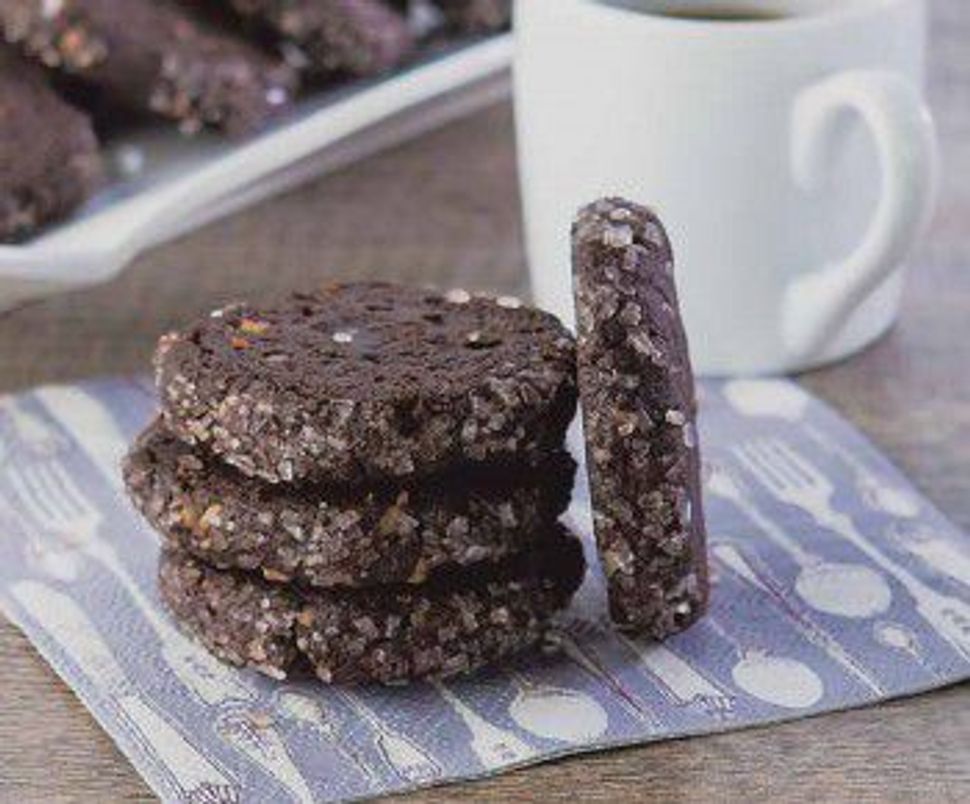 Mom?s Double Chocolate Gelt is one of the gluten-free recipes in ?Nosh on This: Gluten-Free Baking from a Jewish American Kitchen.? Image by jta

When Tim Horel was in his mid-30s, he tripped over his shoelaces and wound up shattering both of his elbows.

“It was way too early for him to be breaking bones like that,” Lisa Stander-Horel, Tim’s wife, told JTA.

The cause for Tim’s weakened bones turned out to be celiac disease, a condition in which the protein found in wheat, rye and other grains provokes an immune response that can damage the small intestine and lead to other health problems.

When the Horels cut gluten from their diet, Stander-Horel found that health problems she had long faced — such as rashes and migraines — disappeared as well.

There is no cure for celiac, which can prevent the body from absorbing needed nutrients and lead to osteoporosis, fatigue and even intestinal cancer. But strict adherence to a gluten-free diet can alleviate most symptoms and provide a chance for the small intestine to heal.

As awareness of the disease has grown, a plethora of dietary options have cropped up. A walk down the aisles of a grocery store finds gluten-free varieties of everything from Rice Krispies to kaiser rolls.

But for kosher keepers and those who just enjoy the pleasures of Jewish foods, adhering to a gluten-free diet can be a challenge. Jewish foods such as kugel, matzah balls and challah are rich in gluten. In fact, wheat and barley are two of the seven species mentioned in Deuteronomy.

To help bring traditional Jewish cooking to the gluten-free, the Horels published “Nosh on This: Gluten-Free Baking from a Jewish American Kitchen,” which was released in September. The book took 10 years to produce — a process Stander-Horel says was “mostly trial and error.”

Stander-Horel has been a passionate baker from an early age and wanted to reproduce all the recipes she remembered from childhood — a policy she calls “No recipe left behind.” In general, Stander-Horel advises gluten-free cooks to carefully examine the ingredients of all purchases and avoid cross-contamination in the kitchen.

Jewish cooks also can take advantage of products already designed to cater to ritual culinary needs. Faye Levy, author of “Healthy Cooking for the Jewish Home,” told JTA that many Passover products can be repurposed for gluten-free cooking.

“Products that cater to those that don’t eat gebrokts — moistened matzah meal — often use potato or rice flour,” Levy said. “You can use Passover noodles in soups or for kugel, and it turns out really well.”

Chickpea flour, a traditional ingredient in the Indian kitchen, also works well in savory dishes like latkes and kugels, according to Levy.

For the Horels, finding gluten-free foods was difficult in the years following Tim’s diagnosis.

“The only flour available when we started was one, rice flour,” said Stander-Horel. “A lot of things were only available in Canada, and we had to learn to order things from far, far away.”

But Bonnie Gillert, a nutritionist and author of “Passover the Healthy Way,” says there are now many new gluten-free products on the market, making a gluten free diet radically easier than it used to be.

“With my celiac patients, I work on their mindset,” Gillert said. “They often begin feeling that they’re deprived, that this is a life sentence. Well, it’s something they have to consider for a lifetime, but being gluten free is no obstacle to a healthy, vibrant life.”

The following is a recipe for Mom’s Double Chocolate Gelt from “Nosh on This: Gluten-Free Baking from a Jewish-American Kitchen” (reprinted with permission).

Preparation:
Preheat the oven to 350. Line 2 baking sheets with parchment paper. In a large bowl, whisk together the granulated sugar, flour, cocoa, baking soda, and salt. Mix in the shortening. Add the egg, coffee, vanilla, and orange extract. Fold in the nuts and chocolate chips. Knead until the dough comes together. Roll the dough into heaping teaspoon-size balls and flatten slightly into 1/4-inch-thick disks. Roll the outside edges in coarse sugar — like rolling a penny on its edges in sand — if desired. Place 1/4 inch apart on the prepared baking sheets. Bake for 12 to 14 minutes. Transfer the cookies to a rack and let cool.