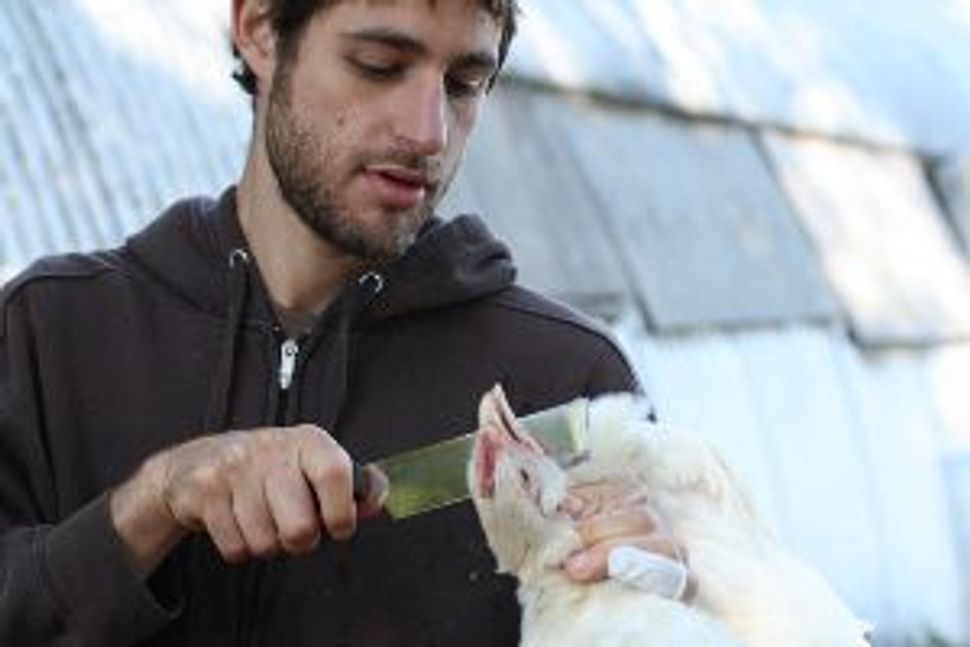 Yadidya Greenberg is a certified shochet (kosher slaughterer), animal welfare educator and blogger. He has given live kosher slaughter and animal welfare presentations at The Portland Meat Collective, Urban Adamah of Berkley and the Hazon Rocky Mountain Food Festival just to name a few. Yadidya will also be featured in the upcoming documentary “Farm and Red Moon”. He has been an active member of the Colorado Hazon community and is slowly making headways onto the national stage. After making this video he teamed up with Director of Hazon Denver, Sarah Kornhauser, to write up this short interview which gives a bit more information on the video, Yadidya, and his message.

SARAH: I was very touched by your video, where did the inspiration for it come from?
YADIDYA: Alyssa Kapnik, co-writer/producer for the video, was helping with something called The Community Narratives Project, a Mizel Museum endeavor which seeks to produce narrated video pieces on interesting people in the Colorado Jewish community. Alyssa asked me if I wanted to make a narrated piece about kosher slaughter. She kept after me to do it for a few months and I finally broke down and agreed, a decision I am so happy I made. We sat together over 4 or 5 sessions and what you see in the video just came out. I didn’t know what was going to happen when we sat down, all these thoughts and feeling were inside of me and she helped bring them out.

Tell me a bit about the kibbutz where you grew up… it sounds like such an ideal place to live.
I had a lot of fun growing up on kibbutz but in many ways it wasn’t so ideal. I like to say that I grew up on a factory farm. The agriculture there was much like any other standard industrialized system: plenty of pesticides, animals confined to small and filthy spaces, veal calves… But I was too young to understand what they were going through. It was only years later that I realized how terrible the things that are still going on there are.

What’s next for you Yadidya?
I am currently working on building myself as an educator and kosher butcher. Along with continuing my kosher slaughter education I plan to seek a rabbinic ordination and a degree in animal science. I hope to eventually run a Jewish educational animal farm, to teach kosher butchery and I dream of one day creating a Jewish Animal Welfare Institute. In the meantime I’m very much focused on my new blog The Kosher Omnivore’s Quest. I’ve been exploring animal welfare issues for practically half my life and kosher slaughter for the past four years. The blog gives me an outlet to share what I’ve discovered with my readers. I will deliver my thoughts and findings on animal welfare and the world of kosher slaughter through my posts, personal stories, recipes, and more videos to come.

I’ve been taught that kosher means fit to eat. What do you think we need to do to make kosher meat truly live up to its name?
This is a really big question but I’ll try to hit on some of the most important pieces. We need more small slaughterhouses, allot more. Slaughter will never be ideal while being performed in such big facilities. When you have a huge facility every second means thousands of dollars and there is way too much incentive to sacrifice animal welfare for increased productivity. Luckily in kosher we already use smaller slaughterhouses that go slower than conventional butcheries. But kosher processing facilities, specifically those used for mammals, are still often too big and too fast. We must understand that the life of the animal is the most important piece. The way an animal is raised and especially the way it is bred effects the quality of life so much more than the last few moments of its existence. The worst animal welfare problems out there result from bad genetics, and most specifically from the hybridization of chickens and turkeys. These hybrids are bred to get very big very fast, not to have healthy outdoor lives. As a result of this single minded breading technique birds regularly go lame, die of organ failure and suffer from a host of serious neurological disorders. (Hybrid turkeys have such big breasts that they can’t even reproduce naturally and must be artificially inseminated.) In the world market over %99.9 of all chickens and turkeys are hybridized. It doesn’t matter if you buy organic, free range or vegetarian fed, unless you’re buying heritage (birds bred using traditional methods) it’s a hybrid. With the growth of pasture raised poultry many producers have started to put these birds on pasture but when raised outdoors they struggle to breath and get around in even mild heat and will regularly die in mass during heat waves. Because heritage chicken and turkey is wholly unavailable on the kosher market I would say that the first step towards making kosher meat fit to eat is to enable its sale.

How do you feel eating meat now that you have killed it yourself?
I’ve developed a certain sense of awareness and love in eating meat that I never used to feel. The more I know about the animal and the way it was raised, and the more I was involved in its life, the more openly I receive the meat. It’s not a huge change, actually it’s very subtle. But I feel it every time I take a bite.