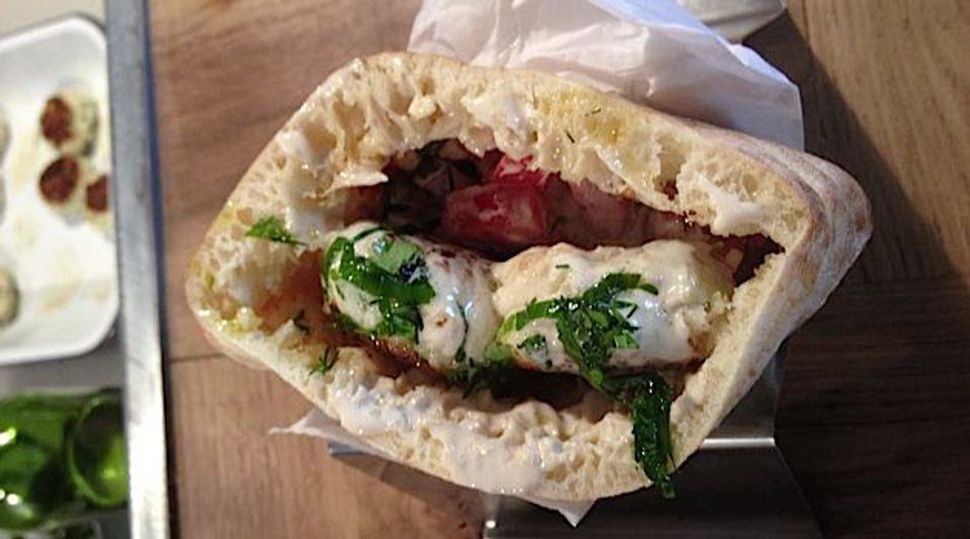 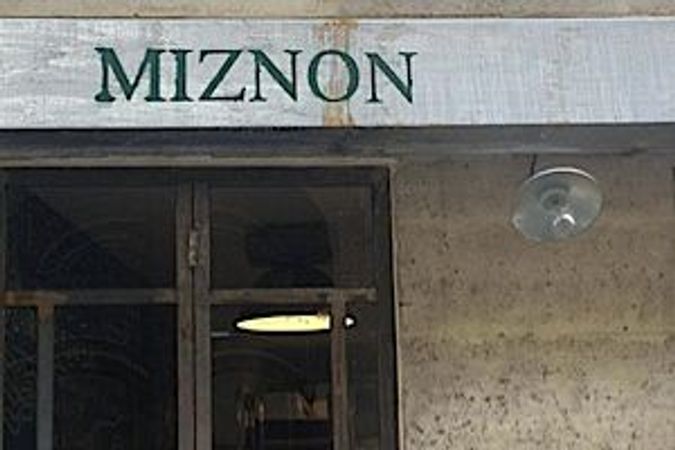 JTA — In the elegant silence of a narrow street near the River Seine, David Moyal takes a breath of fresh winter air and enters a noisy restaurant in the French capital.

Inside Miznon, he is transported to another world, filled with the cacophony of Hebrew voices and Israeli music. A bustling new bistro that Moyal runs in the 4th arrondissement, Miznon is becoming hugely popular with Israelis and French Jews thanks to its Tel Aviv feel and audacious mission to pack Paris into a pita.

Inside, a few dozen customers are chatting and gesticulating while eating fusion dishes such as ratatouille with hummus, beef bourguignon with fried eggplant or a whole head of roasted cauliflower. Sometimes a staffer will spontaneously start drumming on pots to songs by Yehoram Ga’on or the Dorbanim as one of his colleagues doles out complimentary glasses of mint tea.

“As you can see, we were going for good service but with a healthy amount of Israeli ‘balagan,’ ” Moyal says, using the Hebrew slang word that translates roughly as “hullabaloo.”

Opened in October in the heart of the Marais, the historically Jewish district on the right bank of the Seine, Miznon is the brainchild of Eyal Shani, a well-known Israeli television chef who owns a successful restaurant by the same name in Tel Aviv.

“My vision is to take whole cities and translate them into one pita,” Shani says. “So in this case, to take Paris’ energies, its groove, its longings, its limitations, its beauty and its food, and express all of that in one pita.”

Miznon is not the only Israeli restaurant in the Marais to offer pita power for a couple of euros. Next door is L’As Du Fallafel (The Falafel Ace), a Parisian eatery whose devoted clientele and 35 years in existence have made it into something of an institution here.

Moyal, 32, says he is unfazed by the competition.

Paris in a Pita: Eyal Shani is combining the flavors of Paris and Israel in pitas at his restaurant Miznon. Photo: Courtesy of Miznon Paris via Facebook.

“The Ace have nothing to do with what we’re about,” he says. “They are selling Israeli food from the 1970s. We are offering a taste of contemporary Tel Aviv mixed with Paris.”

Some Israeli fans of Miznon become indignant at the mere comparison.

“Miznon is one of the few places where you can get real hummus, which they cook and make here,” says Hen Solomon, who has been living in Paris for several years. “The rest of the restaurants here sell the cliche of Israeli food, shwarma and falafel. That’s bullshit. Been there, done that.”

Still, Ace does have its own card to play. Unlike Miznon, which is kosher style, the Ace is certified kosher.

The fact that Miznon is situated in the heart of the Marais carries special significance for Moyal, who grew up here. Once clotted with Jewish shops and restaurants, the area has grown more chic and become less Jewish in recent years.

If Miznon succeeds in becoming a hub for Israel-born expats in Paris – a population some estimate at approximately 5,000 – it would be a first, according to Ariel Kandel, the Jewish Agency’s head of operations in France.

“Paris doesn’t have any of those Israeli hangouts you see in New York, London or Amsterdam,” Kandel says. “Maybe Miznon will become just that. So far their marketing has been brilliant.”

Indeed, the restaurant has received rave reviews from some of France’s hippest publications, including L’Express Styles, Nous Paris, Time Out and Le Figaro, among others. In addition to non-Jewish clients, the publicity has brought in a stream of French Jews.

“We can’t afford a ticket to Israel every week, so we come here to be reminded,” says Nathalie ben Chetrit, a Miznon regular. “But we also come for the banane au chocolat.”