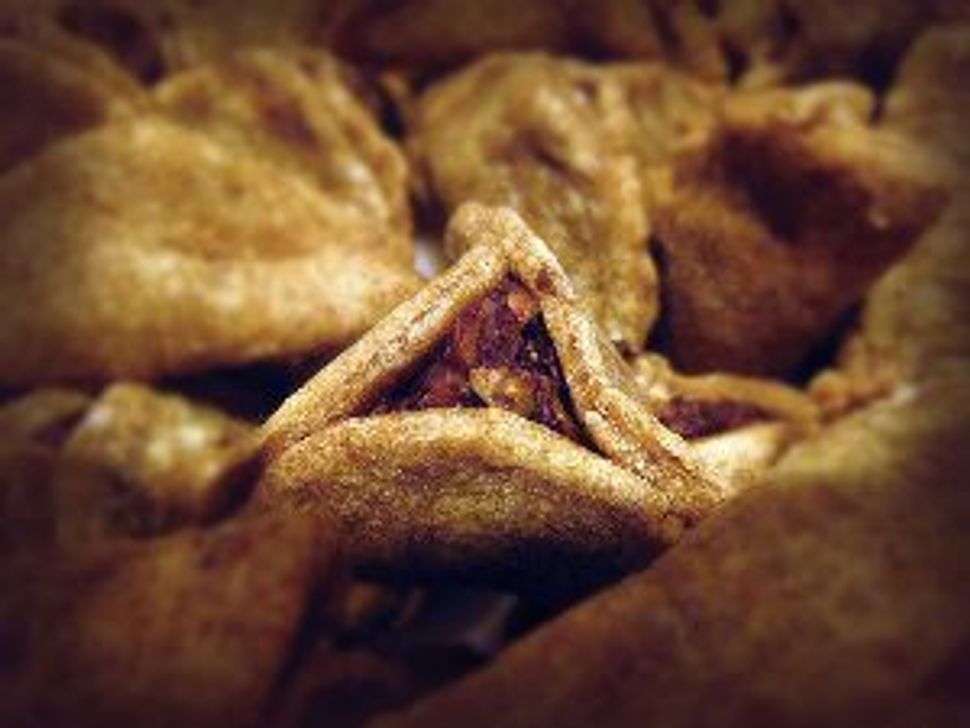 I’ve started noticing hamentaschen showing up in local bakeries, and it made me wonder if one of the reasons we say “Purim Sameach/Happy Purim” is because we know that we’ll be eating lots of hamentaschen, the traditional Eastern-European Purim dessert. This joyous day celebrates the repeal of the death decree against the Jewish inhabitants of ancient Persia (“They tried to kill us, we won, let’s eat!”).

The word “hamantashen” is commonly known as a reference to Haman, the defeated enemy of the holiday. It turns out that there are many different interpretations of the word’s derivation:
– In Hebrew, they are called Oznei Haman, meaning “Haman’s ears”. This name may have come from the Midrash which says that when Haman entered the King’s treasury, he was bent over with shame and humiliation (literally with clipped ears).
– The word tasch means “pouch” or “pocket” in Germanic languages, so the reference may be to “Haman’s pockets”, symbolizing the money which Haman offered to King Ahasuerus in exchange for permission to destroy the Jews
– Another folk story is that Haman wore a three-cornered hat, thus its triangular shape.
– The original Yiddish word montashn, or the German word mohntaschen, both mean poppy seed-filled pockets or pouches; the name was then was transformed to Hamantaschen, likely by association with Haman
– Naked Archaeologist” documentarian Simcha Jacobovici has shown the resemblance of hamantaschen to dice from the ancient Babylonian Royal Game of Ur, suggesting that the pastries are meant to symbolize the pyramidal shape of the dice cast by Haman in determining the day of destruction for the Jews.

Another big debate about hamentaschen is the type of dough they’re made from; one is thicker and more bread-like, and the other is thinner and more cookie-like.

And then, there’s the question of what to fill them with. The original Hamentaschen filling was made with poppy seeds. Others that I grew up with include prune, or a variety of fruit preserves or marmalade, including apricot and raspberry. In doing some research, I found that chocolate filled hamentaschen are popular in Israel! Seems like a tradition we should include here.

One of the deeper themes of Purim is that we are told to celebrate the holiday, and make it possible for those less fortunate to also join in the festivities. When we feast or send food packages, are the products we use harming or benefiting the workers? In many situations, those “less fortunate” are the people who grow the food we use to celebrate our holidays. They suffer from market-driven forces that pay them less than the food’s real value; they don’t have access to world markets and get taken advantage of by local distributors or large corporations; and prices on the world market fluctuate, so they can never be sure what price they’ll receive when it’s time to sell a crop.

Choosing fair trade chocolate and sugar for our Hamentaschen better assures that the farmer who grew the raw ingredients for those foods, has received a fair price; and therefore is more able to adequately provide for his/her family. Fair trade is based on the following principles: – Farmers are guaranteed a fixed price that exceeds their production cost, even when the market rate falls below that
– They receive an extra fair trade premium per pound
– Trading relationships are long term and transparent, allowing producers to reduce costs, gain direct access to credit and international markets, and develop the business capacity necessary to successfully compete.

Ilana Schatz is the founding director of Fair Trade Judaica. She lives in El Cerrito, CA and loves to hike, restore their backyard to its original oak tree habitat, and make wine and liqueur from the eight plum trees in their garden.