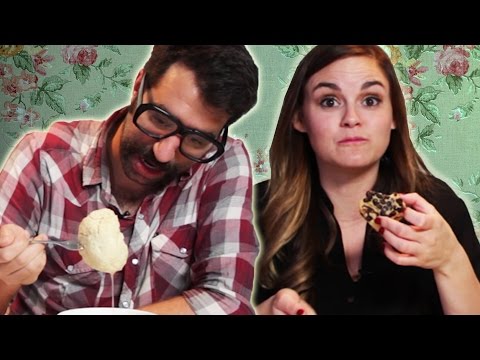 I saw this video today, and I have to say, it kinda freaked me out. I felt quickly, viscerally defensive of Jewish food and indignant that the versions of classic Ashkenazic dishes on offer to an innocent band of non-Jewish young people looked like the least desirable ones imaginable.

There was a piece of gefilte fish plopped onto a lettuce leaf, with what looked like a big dollop of nose-clearing horseradish on top. Look, gefilte fish can be a bit scary — even for the initiated.

A pale, flaccid-looking kugel appeared overcooked and, from the tasters’ comments, overly sweetened and cinnamon’d. Where were the nice browned edges? Where was the balance of flavors? And why were there maraschino cherries and what looked like canned peaches on top of it?

A pile of ugly brown chopped liver sat sadly on a little plate, while incredulous would-be tasters poked it suspiciously with celery sticks and said nasty things about it. Where were the caramelized onions and heavy cream that characterized the chopped liver my mother used to serve on special occasions? Where were the lovely seeded crackers or crisp planks of matzo to scoop it up with?

Who knows what the matzo ball soup tasted like? The ball itself appeared fluffy (or maybe just enormous). At least it didn’t look like what my grandmother used to call a “sinker.” But had the watery looking chicken broth simmered slowly for hours to concentrate its flavor? Had a nice piece of flanken been added to lend richness? I don’t think so.

The rugelach was a hit, but really, it’s pretty hard to screw up rugelach.

Jewish food, like any cuisine on earth, comes in as many variations as there are cooks to make it. Did the cute band of intrepid eaters in this video need to be subjected to what looked like the least tasty version possible?

Take a look at the video and use the comment box toward the bottom of this page to let me know what you think.