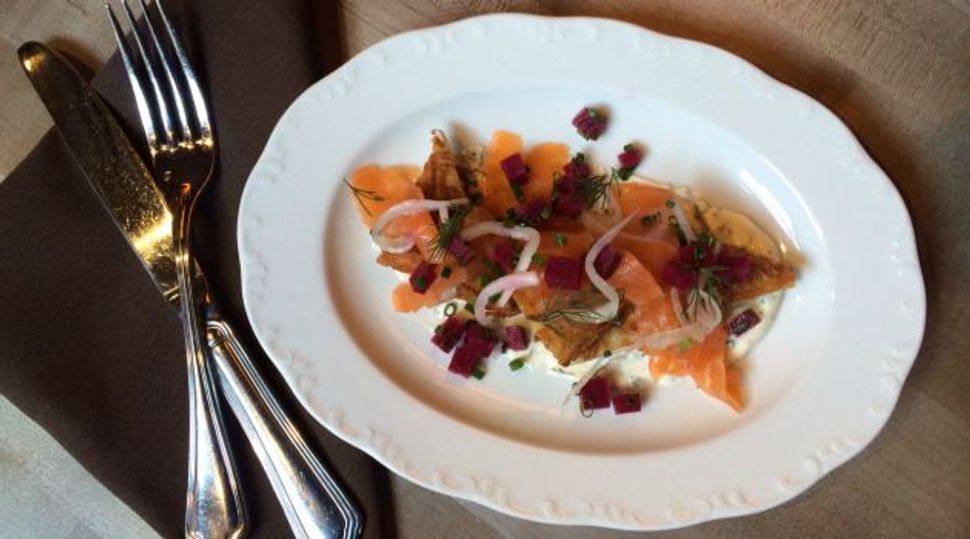 On Sunday, December 7, nine eateries across a wide swath of Philadelphia’s stellar restaurant scene will showcase recipes created especially for the 12-year-old cook-off, now a hot ticket for Philly foodies.

The event began in 2003 “as a way to blend a popular Hanukkah tradition with Philadelphia’s growing foodie culture — a direct result of the city’s restaurant renaissance,” said Sahar Oz, director of programming at Philadelphia’s Gershman Y, which launched — and still hosts — the event. More than 350 latke lovers are expected this year.

But a Hebraic version of “Iron Chef” it’s not. “It’s a celebration, not a competition,” Oz said. “We’re appealing to a wide variety of diners across ages, religions, ethnicity and of course, taste preferences.”

Instead of, say, deconstructing latkes or spritzing plates with fried-potato foam, most chefs start with a solid traditional base and jazz it up from there. “We’re making the traditional latke awesome,” said Yehuda Sichel, co-chef at Abe Fisher, whose recipe pairs a straight-up latke with gin-cured salmon, pickled beets and the soft white cheese boursin. “A potato latke is like a canvas — you can put many different things on it, but it’s really important that you start with a really good latke.”

For Abe Fisher’s submission, “I played around with the amounts of flour and egg and salt. Standard Idaho potatoes give you the best latke: crisp on the outside and creamy on the inside,” Sichel said. “Cured or smoked salmon is not necessarily a traditional accompaniment to a latke, but it works too well not to do. Sour cream, crispy potatoes, and salmon are a money combination, texturally, and the beets balance it all out. The combination is pretty representative of standard Eastern European fare.”

“I grew up with a very generic latke, which I never really enjoyed,” Caplin said. “For the latke that we came up with, we definitely drew from a traditional style but added more body and more depth to the flavor.”

Its untraditional accompaniments “are seasonal, and we felt that they would change the latke enough so it was not so mundane. Celebration-wise, Hanukkah is about oil that lasted longer than it should have and we just want to give people a latke they will think has to be a miracle,” he said.

Apparently, the potato pancakes at Latkepalooza achieve the desired effect. “Each year, the latkes get more daring, particularly with respect to fish, brightly colored vegetables and the level of hot spices,” said Oz, the organizer. “As the American public has embraced more exotic flavors with a heightened health consciousness, these trends have been reflected here.”

“While Mediterranean and Southeast Asian variations on the latke have been very popular at previous Latkepaloozas, some of this year’s participants will surprise diners with a new, refined Ashkenazic take,” Oz said before the event. “Abe Fisher’s latke is probably the prime example of this.”

The latkes served at Latkepalooza are not under kosher supervision, Oz noted, “but they cannot include any ingredients that could not be classified as kosher if we had hashgacha,” he said. “From that perspective, Latkepalooza is also a dream come true for vegetarians, vegans and pescetarians.”

What tips do these star Philly chefs have for Forward readers who want to make the perfect latke this Hannukah? “Two things,” said Vedge’s Caplin. “You need to control the oil temperature. If it is too hot you leave room for the latke to be undercooked in the middle and if it’s too cool the latke will be too saturated with oil. And make them thin. I’ve had too many latkes that are too thick and chewy, instead of thin and crispy.”

Latkepalooza will take place on Sunday, December 7 from 2 to 4 p.m. at the Gershman Y, at 401 S. Broad Street (corner of Broad and Pine).