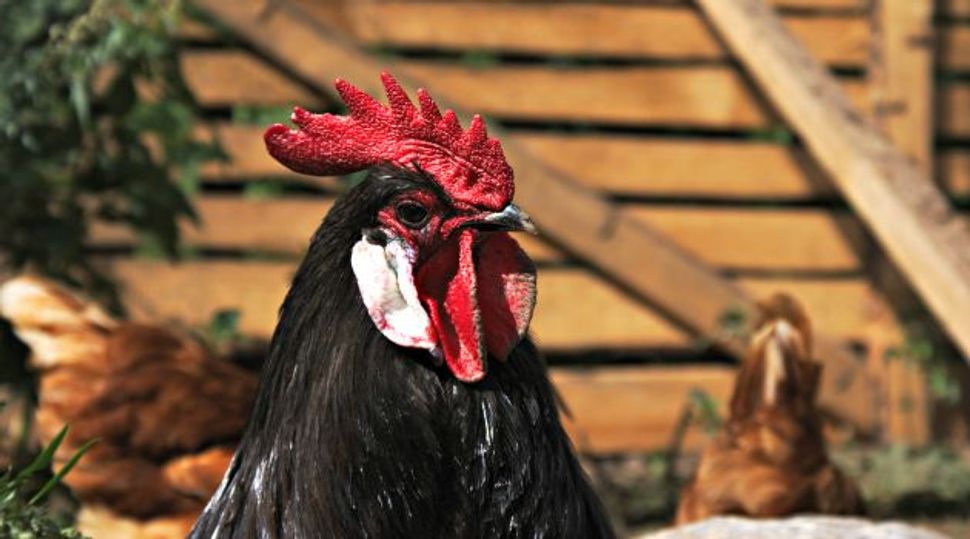 I slaughter my own chickens.

For the past several years, I have seen many animals die. I have experienced a range of feelings, from total cold focus to sadness and even fear. But I recently experienced a slaughter that transformed the way I see meat.

I trained in kosher slaughter four years ago, after seeing a slaughter myself. I realized I wanted to be able to produce my own meat — I saw making local kosher meat accessible as an essential way to create a healthy Jewish community, healthy food systems and a healthy local economy.

At the Hazon Food Conference in December, I helped with a demonstration led by fellow shochet (slaughterer) and food activist Yadidya Greenberg, and I performed the actual slaughter.

We slaughtered three chickens. Two of them were conventional chickens from a factory farm, and one of them was a heritage-breed chicken raised by a farmer named Frank Reese. The two factory-farmed birds looked bizarre, with their splotches of featherless skin, with their dull and dirty coloring. The heritage-breed bird was a brilliant black with fluffy plumage and a lot of strength and life.

As I performed the slaughter, Yadidya explained to the crowd the death process. After the cut has been made, the bird loses feeling, so its death spasms are not conscious but just expressions of its body’s final closure. He described how the the factory-farmed birds would experience a quicker transition into the stillness of death than the heritage birds. These factory-farmed chickens were sicker and closer to death in the first place; there wasn’t much life left in them anyway.

To understand factory-farmed birds, imagine this: Behind closed doors, a food corporation has combined a hundred thousand chickens in a breeding exercise, channeling Mendelian genetics in an operation so huge the earth has never seen its like. Through this process, they have developed one highly bred super-chick with a single genetic superpower — for example, a hugely oversized breast, or growth as fast as the human equivalent of a nine-year-old child weighing three hundred pounds. Imagine the same process occurring for 14 to 20 different genetic traits, requiring an input of millions of birds. And imagine these twenty hybrid birds bred together to produce one “frankenbird,” to be duplicated in its exact form hundreds of millions of times.

This bird is the Cornish cross, and it represents the overwhelming majority of chickens we eat in this country — and the entirety of the kosher market. Most of us have never tasted a true heritage chicken.

There are many critical differences between these birds. The Cornish cross is the product of a factory farming system that threatens the climate, its local environment, animal welfare and more. As a person who professionally accompanies animals on the powerful transition from life to death, one of the most profound differences I personally observed was exactly what Yadidya described — the difference in their deaths. The pitiful death of a hybrid bird, genetically bred to live a life full of suffering, and the noble death of a heritage bird, felt so viscerally opposite of each other.

The bad news, if you keep kosher, is that the birds I slaughtered at the Food Conference were the only heritage-breed kosher poultry available in the world. But the good news is that awareness is growing. More and more consumers see a need for reconsidering and reforming the system that produces our meat. With more consumer power, we can make a real change in the meat that we eat.

In the meantime, why not pick up some heritage-breed chickens and contact your local shochet for a small-scale job?

Jacob Siegel is a student at Yeshivat Chovevei Torah, an open and modern Orthodox rabbinical school. He is also certified shochet (kosher slaughterer), and offers demonstrations and workshops across the country on kosher sustainable meat.