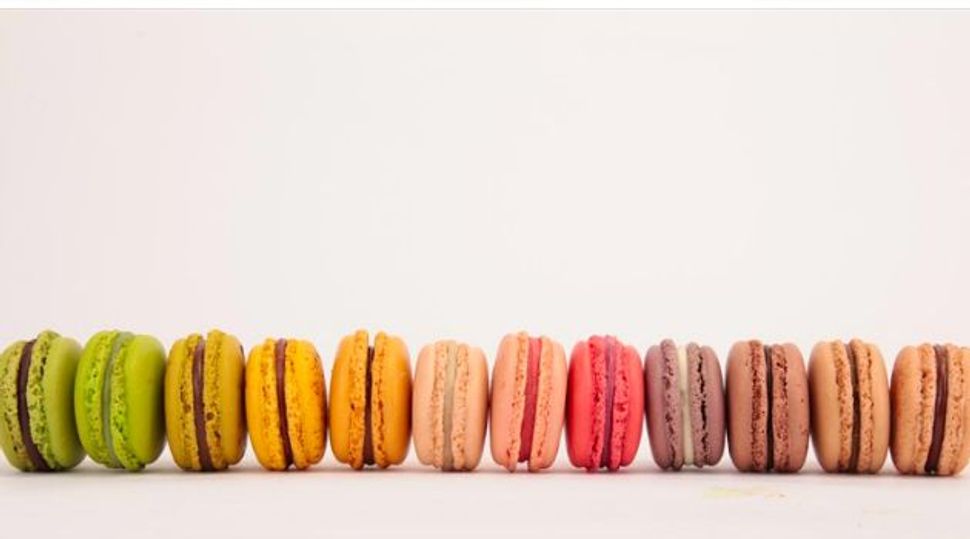 We love sweets from NYC’s William Greenberg Desserts, and we’re grateful the company cranks out such luscious kosher-for-Passover treats. They make great gifts for your Seder hosts, and show-stoppers for dessert at your own feast. Favorites: rich apple macaroon cake that translates as almond sponge cake with sliced apples and crushed pecans; a classic honey cake; and superb macaroons in trad flavors like chocolate almond and vanilla. They’re only available through the holiday.

….Mark Furstenberg of Washington, D.C.’s Bread Furst — a James Beard Award nominee — is beloved for doing things his way. There’s a kind of poetry in his descriptions of Passover offerings from the hugely popular bakery. “Chicken soup: A double-strength chicken broth to which you will be able to add a few carrot strips and a sprinkling of minced parsley just to make it pretty. Matzo balls: They are not feathery-light but they aren’t leaden either. They are flavored with onion and parsley and poached carefully. You have only to drop them into simmering chicken soup just until they are reheated and before you serve the soup. Gefilte fish: If you have never tasted gefilte fish not spooned from a jar, this will be a revelation. You won’t smother it in horseradish. This is a food; it is something you will want to eat.” More online.

….Passover treats from chi-chi patissier Francois Payard aren’t prepared under rabbinical supervision. But let’s say they capture the holiday in spirit. Not that we need an excuse to devour s’mores bites ($24 for 14 pieces), matzo-meal sable topped with vanilla marshmallow and coated in Valrhona chocolate; chocolate caramel matzo (5 pieces for $27.50) sprinkled with fleur de sel; and almond petit fours ($24 for 18) in cherry, chocolate chip, almond, candied orange & powdered sugar. We will now refer you to our following item…

….Opt for whole-wheat or spelt matzo. Pace yourself with the vino. And stick with fresh veggies and fruits through the holiday. It’s all part of Washington Jewish Week’s “haggadah” for staying healthy this Passover. “The endless monotony of eggs, potatoes and matzo for eight days may leave you feeling like a slave to your chametz-free diet.” But by staying vigilant, “you may even find yourself making an exodus from your current pant size!” writes Sarah Rueven. As if.

….Millennials are going kosher partly because they think it’s healthier, reports the Houston Chronicle. “You are what you eat,” one rabbi tells the paper. “If there are impurities, they go into our bodies. Kosher animals only eat fresh vegetation.”

….Brooklyn Jew-panese hybrid Shalom Japan is one of the borough’s 20 best restaurants, according to hipster blog FreeWilliamsburg, which lauds its “authentically inauthentic Jewish and Japanese food,” like matzo ball ramen and pastrami-stuffed chicken. Chef-owner Aaron Israel was the opening sous-chef at Torrisi and later worked as the chef at Mile End. His partner, Sawako Okochi spent six years working under Anita Lo at Annisa, according to NYMag.com.

….Yaelle Ifrah’s “new Jewish cuisine” pop-ups in Paris have long been a hot ticket in the City of Lights. And this week, pop-culture mag Paste goes behind the scenes at Ifrah’s kitchen in the Marais district. On her sought-after menus: Smart spins on Semitic favorites, including savory mushroom strudel; date-based charoset, inspired on her mother’s recipe, as a glaze for duck; and tuna pastrami. Ifrah owned Paris hotspot Yayin — that’s wine in Hebrew — until it shuttered in 2014.