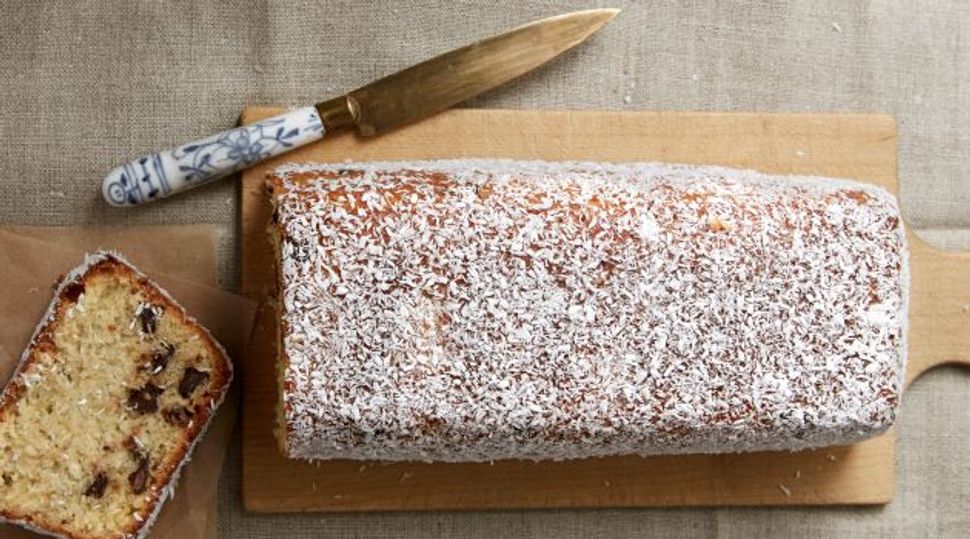 Breads is rising. The Israeli-owned Union Square bakery, beloved by New Yorkers for artisanal loaves and luscious pastries, will take over one of the Bryant Park food kiosks relinquished by sandwich maker ’wichcraft, The New York Times reports. Chains like Le Pain Quotidien and Wafels & Dinges will occupy the other booths.

….In other Breads news, the bakery is upping its Passover game with four new sweet treats, along with its usual roster of irresistible KFP goodies. Look for chocolate pistachio cookies; coconut chocolate chip cake (pictured above); fruit tart; and rich chocolate mousse cake…

This sweet-and-savory Moroccan spread is a versatile addition to a Passover meal. Photograph courtesy of NYSHUK

…If you’ve never tasted tanzeya, the traditional Moroccan fruit-and-nut stew, Passover is a great time to try it — at least according to Brooklyn’s NYShuk, which sells artisanal renditions of traditional Sephardi treats. “Tanzeya was and still is always on the table for high holidays,” Leetal Arazi, one of NYShuk’s founders, told the Forward. “For us, it’s the ultimate way of bringing that sweet-savory flavor that we associate with Moroccan cuisine, as traditionally you would pair the tanzeya with caramelized onion/lamb and the like.” For Passover, NYShuk’s web site offers a nifty haroseth recipe using tanzeya, walnuts… and Slivovitz plum brandy. Dayenu! Grab a jar of tanzeya online or at Dough Doughnuts in Manhattan’s Flatiron neighborhood.

….On its weekly Good Food program, hypercool L.A. radio station KCRW spotlighted The Vilna Vegetarian Cookbook, which host Wendy Waxman discovered while visiting the rare books room at the YIVO Institute for Jewish Research in Manhattan. The cookbook was written by Fania Lewando, a Jewish restaurateur from Vilnius, Poland (now Lithuania), in 1938. “The vegetarian recipes in the book are decades ahead of their time,” reports Good Food, whose blog features two Passover recipes from the book: apple and horseradish salad and Passover cheesecake.

….We’ve got man-caves, and manscaping. Now, it’s time for the Man-Seder, says the Wall Street Journal. The fifth annual ‘Guys Night Out & Seder Summit’ at Beth Sholom in Potomac, Maryland, drew nearly 500 men who came to sample 900 pounds of kosher ribs and multiple brands of Scotch — “and to get fresh ideas for holding the Passover Seder,” reports the Journal’s Lucette Lagnado. “It is steak and Scotch, no dessert, no girlie drinks,” says Simcha Tolwin, the Orthodox rabbi who runs Aish Detroit, a nondenominational Jewish learning center. Tolwin calls his Man’s Seder “a hard-core evening for men only,” the Journal reports. “The goal is simple: to teach men about the Passover Seder, including how to run one, and engage them more in the Jewish faith.”
We’ll save the concept of “girlie drinks” for another column.

….We’ve raved about the “good Jew food” at Toronto’s Fat Pasha, where bad-boy owner Anthony Rose serves massive mashups of Ashkenazi and Sephardic cuisine. Toronto Life magazine apparently agrees; its April issue names Fat Pasha #18 on a short list of the city’s best new restaurants. “The freshness of the hummus is as serious a matter as the bite of the pickles. The portions, as at Rose’s other establishments, are humongous, the kind of cooking to put meat on your bones.”

….Funny — that Bloody Mary garnish looks just like a bagel and lox with a schmear. That’s because it is a bagel and lox with a schmear. The Lox’d and Loaded Bloody Mary made its debut this weekend at Washington, D.C.’s Buffalo & Bergen, a kind of grown-up soda shop. Barwoman Gina Chersevani created the Lox’d and Loaded for a local cocktail contest, Washingtonian magazine reports. Crowning an intense Bloody Mary seasoned with “everything” spices, black pepper, horseradish, celery seed and a generous amount of Tabasco is “a New York-style bagel, baked fresh every morning, spread with cream cheese and stacked with the traditional fixings and lox from a New York State smokery.”

….Philadelphia hummus lovers just lucked out. Dizengoff, the “Israeli hummusiya” from star chef Michael Solomonov’s CookNSolo restaurant group, has extended its hours to 7 p.m. daily whenever hummus and pita sell out. “We’ve ramped up production of our handmade pita, and can now make up to 700 pieces per day,” promised Dizengoff chef Emily Seaman in an announcement. The restaurant also started delivering this week through delivery service Caviar, bringing its must-have meat, vegetarian and vegan hummus, along with that pita and drinks like frozen mint lemonade.

….Until April 4, a pop-up Jewish cooking school in Montreal is offering demos on everything from the evolution of Jewish cuisine and easy gourmet cooking to fish and foods that heal. The Jewish Food Project aims to show how vibrant and diverse Jewish cooking is, project coordinator Ksenia Prints told The Montreal Gazette. “It’s not just brisket.” Classes have included A Taste of Jewish Argentina and Flavours of Morocco.

….The matzo is standard. But the bakery is anything but. Not only is the Tiferet Matzot factory in Dnepropetrovsk, Ukraine, Europe’s only permanently open bakery for handmade, or shmurah matzo. It also offers job security to about 50 Jews living in a war-ravaged region with a weakened economy and high unemployment, reports JTA. Two kashrut supervisors ensure that the factory’s monthly production of approximately eight tons complies with kosher standards for shmurah matzo. A 2-pound box of Tiferet Hamatzot costs approximately $10 locally and $15 abroad, compared to more than double that price for shmurah matzo produced in bakeries in Western Europe, JTA says.

….Volunteers in Philadelphia are delivering Passover staples like matzo, eggs and gefilte fish to more than 600 families in need this year, according to Philly.com. Project Hope, launched locally 18 years ago by Philly-area resident Samuel Domsky, raised $30,000 this year to buy holiday food; the project teams with a Philadelphia supermarket, which buys the groceries in bulk at a discount. Begun in New York, the Bnai Brith program has spread to Boston, Philadelphia, Connecticut, Maryland, Virginia and Washington, D.C.

…Passover is big business at Eli’s, the chichi-haimish gourmand empire on Manhattan’s Upper East Side. A rep told the Forward that through the holiday, Eli’s expects to sell 8,000 matzo balls and 2,800 quarts of matzo ball soup; 1,300 quarts of freshly made gefilte fish; 975 pints of chopped liver; 1,000 pounds of potato spinach kugel; and 1,200 pounds of matzo, including the store’s own handmade version)…