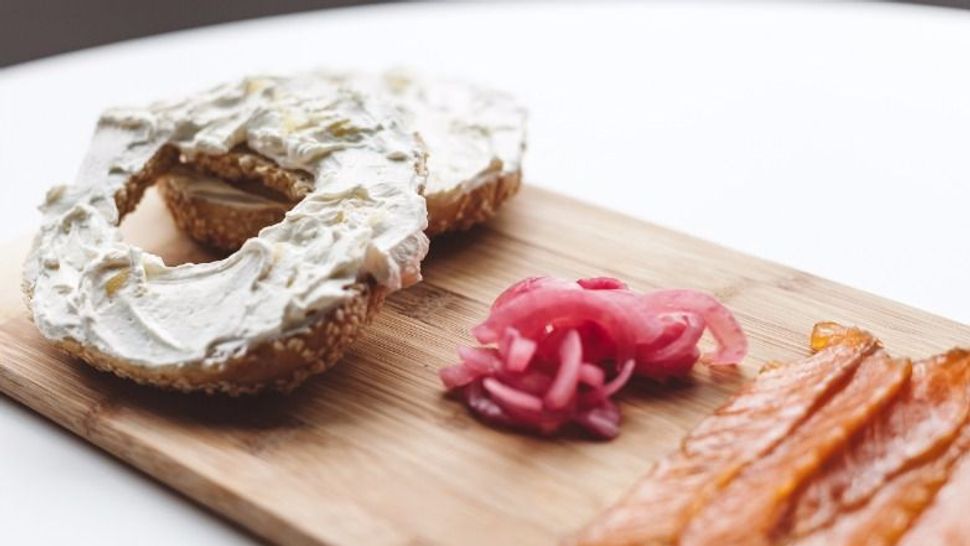 At the café in the Jewish Museum of Montreal, a St-Viateur bagel is served with preserved lemon cream cheese, ras-al hanout-spiced gravlax and pickled onions. Image by Lauren Kolyn

Two weeks ago, my family and I spent a week in the Laurentian mountains, an hour north of Montreal. We were there for a week-long Jewish music and culture festival called KlezKanada, which has become one of our favorite annual excursions. (Brisk dips in a gorgeous lake, the convergence of the world’s most renowned klezmer musicians and Yiddish scholars, the sound of fiddles and clarinets floating across the bucolic campgrounds at all hours — what’s not to like?)

Most years, we make a point of stopping in Montreal-proper on our drive home to Brooklyn to wander the streets and stock up on bagels. Call it heresy, but this New York Jew is a devotee of the heavily seeded, sweet and petite beauty that is the Montreal bagel. (I also love New York bagels. They are simply a different animal). This year our schedule did not allow us to make the stop, and that’s a shame — partly because of the dearth of bagels in our freezer, and mostly because we missed the opportunity to eat at Fletchers.

Opened this past July, the Jewishly-inspired café, housed in the Jewish Museum of Montreal, is taking the city’s legacy of global Jewish cuisine into the 21st century. And its breakfast options — a Moroccan-influenced bagel board that tops St-Viateur bagels with preserved lemon cream cheese, ras-al hanout-spiced gravlax and pickled onions; eggs in a bagel as a Jewish homage to the glorious “toad in a hole” breakfast sandwich and, soon, chocolate babka French toast served with maple-tahini — sound so very enticing.

Fletchers is the brainchild of Kat Romanow, co-founder of The Wandering Chew, a series of pop-up dinners in Montreal that explores a different Jewish cuisine (Iraqi, Italian, Mexican, Scandinavian, etc.) at each dinner. Along with Hof Kelsten, a popular bakery and cafe and Arthurs, a self-described “nosh bar” that also opened this summer, it is helping to solidify Montreal’s reputation as an innovative, as well as historical, center of Jewish cuisine.

It looks like my family might just have to head back up to Montreal before next summer’s klezmer fest.