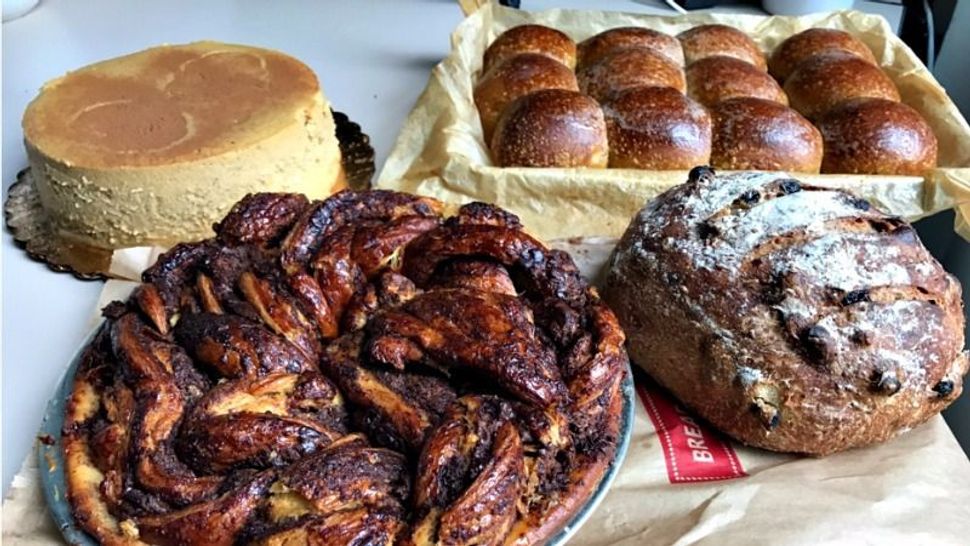 It’s rare that I walk into the Forward offices and don’t see animated faces and hear lively conversation. But on Wednesday morning, after a long, stressful night of watching and covering the election returns, the Forward staff was quiet; editors and writers sat bleary eyed and pale before computer screens, or moved slowly to and from the coffee machine in the pantry, zombie-like.

Then someone mentioned that a large box had just arrived for me. Inside, it turned out, were a variety of goodies from Breads Bakery, a preview of what the Breads team would be turning out for Thanksgiving.

There was a chocolate babka pie and a pumpkin cheesecake, as well as a crusty round bread called an autumn loaf, studded with nuts and dried fruit, and a tray of pumpkin dinner rolls, shiny with a maple glaze. After snapping the image above I put everything back into the box and carried it out to the big open area where a number of editors sit together. I spread the word: The Breads fairy had come.

People began to stir, then even grin. Soon there was a bit of tentative oohing and ahhing. I think for a moment or two we forgot about politics, focusing instead on procuring pieces of those beautifully made sweet and savory confections.

Everything does not work out the way you hope and expect — and then there are times when the unexpected takes the form of a much needed, even spirit-lifting treat. For that, I’m thankful.