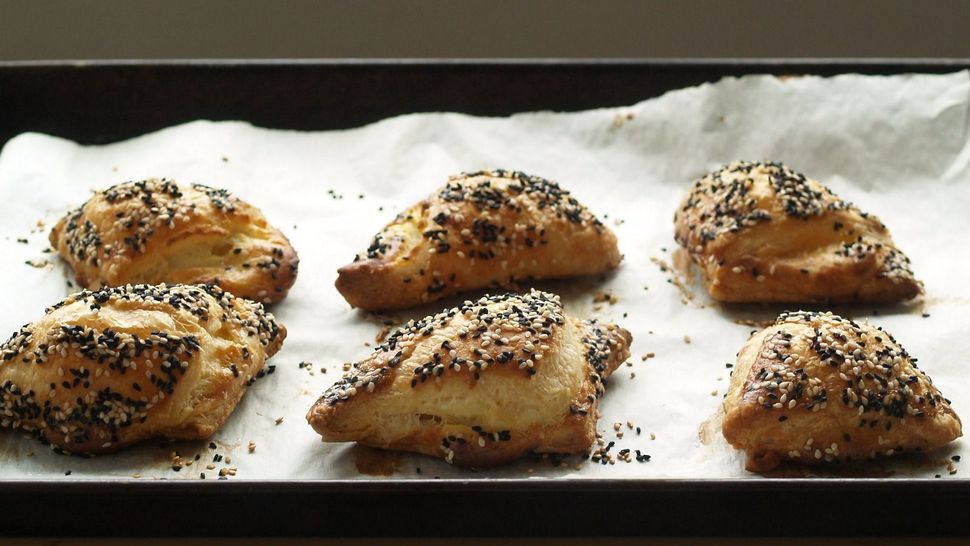 Savory pastries for a rally — or anytime. Image by Gayle L. Squires

When I was living in a moshav (a farming cooperative) near Netanya in Israel, everyone talked about one little bureka stand. People said the owner made the best burekas. His shop always had a line of people waiting, and in Israel this is a big deal because nobody likes to wait in line for anything.

Later I found out that he was not making his own dough — really! He was buying the dough premade just like everyone else. So why were his burekas better?

The difference is that he was baking burekas fresh throughout the day, multiple times a day, so when people ordered a bureka, they would get one that was recently pulled out of the oven. His burekas weren’t preheated or microwaved until hot. It was the freshness that made his burekas so great.

To Israelis, the bureka is like the American bagel — it’s available almost everywhere and is eaten at all times of the day, from morning through late night. But what exactly is a bureka? In Israel and everywhere, a bureka is a flaky turnover made with a very thin dough and filled with a savory stuffing. In Israel the classic fillings are cheese, potatoes or spinach and the burekas are usually served with grated tomatoes of a hard-boiled egg and sometimes with tahini on the side.

Burekas (börek) were brought to Israel by Jews from the Balkans, Turkey and Greece, and were originally made with phyllo or yufka dough. Also referred to as sambousak or boyos, they can be stuffed with ground lamb and other combinations of cheese, herbs and vegetables.

No matter what it’s called, if it’s fresh, tender and filled with quality ingredients, you’re in for a treat. The key to a great bureka is to achieve a balance between the flakiness of the dough and a filling that has an assertive flavor but is also ample in amount. But really, more than anything else, a bureka is best when it is absolutely fresh and served hot from the oven.

This recipe includes the classic ingredients for filling, but feel free to experiment — add peas, fried onions, olives or tapenade or sautéed mushrooms, or make a pizza bureka with matbuchah, fresh mozzarella and basil.

1) Place the cream cheese and feta cheese in the bowl of a stand mixer fitted with the paddle attachment and beat on medium-low speed until smooth. Add the sour cream and mix until well combined. Add 1 egg and beat to combine, scraping down the sides and bottom of the bowl as necessary. Add the flour and mix until combined.

2) Set the puff pastry on a lightly floured work surface and roll it into a rectangle approximately 8½ by 16½ inches and about 1/8 inch thick. Trim the edges so you have a nice, clean rectangle, then divide the dough into eight 4-inch squares. In a small bowl, whisk the remaining egg with the water and salt; brush some of this egg wash over 2 adjacent edges of each square. Reserve the remaining egg wash.

3) Place about 3 tablespoons of the cheese filling in the center of each square and fold the non-egg-washed side of the dough over to meet the egg-washed edge—but do not press the edges to seal (see photo). Instead, lightly tap the sides together about 1/8 inch in from the edge; then use your finger to press down and seal the triangle along this line (this is so the edges puff when baked, letting you see the layers of the pastry at the edge of the burekas; see photo).

4) Set the burekas on a parchment paper-lined sheet pan and refrigerate for at least 20 minutes and up to 24 hours (if refrigerating them longer than 1 hour, cover the sheet pan with plastic wrap).

6) Remove the burekas from the refrigerator and brush the top of each one with the remaining egg wash. Stir the sesame seeds and nigella seeds together in a small bowl, and sprinkle each bureka generously with the seed mixture (see photo). Bake the burekas until they are puffed and golden brown, about 25 minutes. Try to cool the burekas slightly before eating—if you have the willpower!