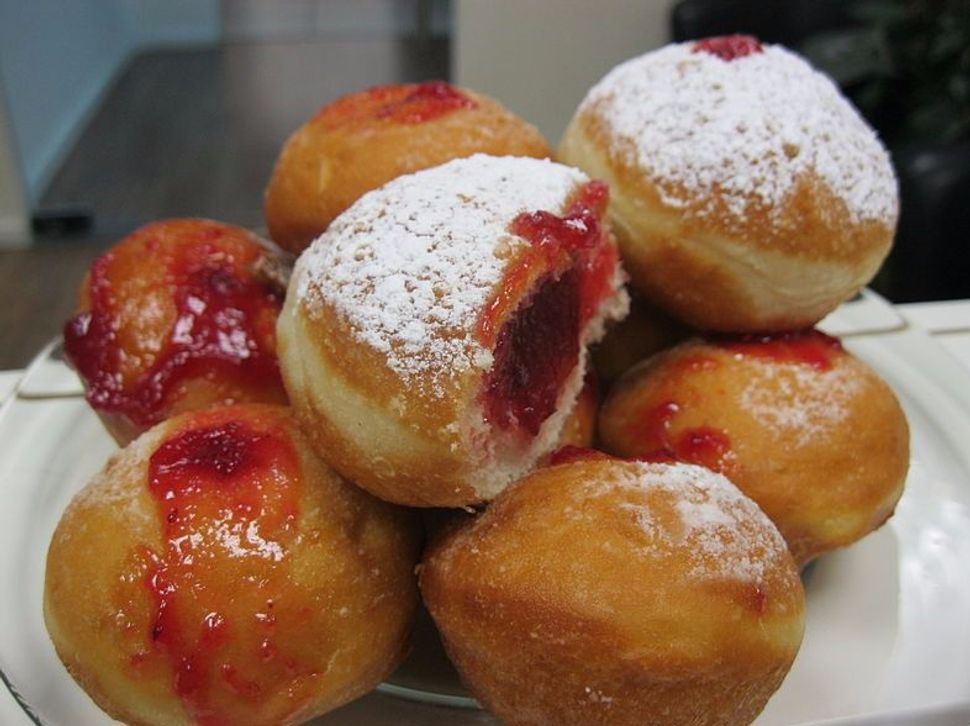 It’s about halfway through Hanukkah, and your initial excitement about latkes has worn off. But if your enthusiasm for arteriosclerosis has yet to be sated, there’s still a second stage to savor: the pleasures of sufganiyot.

Unlike latkes, which are always better homemade, one of the greatest of these pleasures is that you can buy sufganiyot from a bakery without feeling guilty about sacrificing taste for convenience.

It’s traditional, of course, to eat jelly-filled doughnuts on Hanukkah. But I would argue that the jelly is not strictly necessary; it’s the fried dough component that reminds us of the miracle of the everlasting oil. Nevertheless, when I began canvassing people I knew about their own favorite doughnuts, I received a stern warning from my friend Rabbi Hershey Novack, who reminded me that part of the Hanukkah story involves the Maccabees removing a pig from the Temple in Jerusalem. I blithely told him that modern-day doughnuts were fried in oil, not lard, which made them Hanukkah-acceptable, if not Kosher. But then I started calling around and learned that he was not being overcautious. (I’m sorry, Rabbi Hershey.)

Here, then, in descending order of kosherness, is a list of the best fried dough in Chicago.

Tel-Aviv Kosher Bakery (2944 W. Devon) and North Shore Kosher Bakery (2919 W. Touhy): Both these bakeries are in West Rogers Park, half a mile apart. Both are pareve and Kosher-certified. Both offer sufganiyot filled with chocolate, caramel, custard, and raspberry jelly. Which is better? Remember that joke about the two Jews on a desert island with three synagogues?

Zelda’s Kosher Catering (4113 Main Street, Skokie): Alas, Zelda’s is a caterer, which means you cannot just walk in and grab a jelly doughnut to go, but this is useful information if you want to have a doughnut wall, which is apparently the latest thing in weddings—and maybe now Hanukkah parties?

Shalom Kosher Bakery (1165 N. Arlington Heights Road, Buffalo Grove): Beloved by the Jews who fled the city for the prairie and now complain about having to drive 45 minutes for a decent bagel.

Leonard’s Bakery (2776 Dundee Road, Northbrook): Leonard’s is the history of Chicago’s Jews in bakery form. It started on the south side, migrated to Devon, and now finds itself on the North Shore, where it is “Kosher-style,” that is to say, pareve, but open on Saturdays.

Smack Dab (7006 N. Glenwood): Smack Dab has no Kosher certification, or even a permanent home (it’s a pop-up in various bars in Rogers Park, currently the Red Lin Tap at 7006 N. Glenwood), and its doughnuts have no filling. But they are vegan. And they are very, very good.

One of the beauties of the holiday season is learning that, no matter our race or creed, we all like looking at lights in the darkness and consuming fried dough stuffed with jelly, chocolate, or custard. At Dinkel’s Bakery (3329 N. Lincoln), they’re called Bismarcks; at Delightful Pastries (5927 W. Lawrence), paczki (pronounced poonch-key, which is really fun to say); and at BomboBar, bomboloni. And if you are worried about the dangers of fried food, there are also kolacky at Weber’s Bakery (7055 W. Archer), which get crisped up in the oven, not the fryer.

(Note: the pacski and kolacky are vegetarian. The Bismarcks are not. Neither are the fried doughnuts at Weber’s. As for the bomboloni, BomboBar usually uses oil, but the Hanukkah miracle does not always extend to Italian restaurants, so call ahead to be sure they haven’t resorted to lard.)

Since it is the most likely candidate for introducing the maple bacon doughnut to Chicago, there is no way you can justify Glazed and Infused (various locations, including 813 W. Fulton Market) as Kosher. It is, however, vegetarian, and offers some imaginative seasonal variations on the filled doughnut, including a Mexican hot chocolate snowball and an eggnog Bismarck (more useful than a rousing game of dreidel to make your Christian guests feel at ease with Hanukkah traditions).

LA import Stan’s Donuts (various locations, including 1560 N. Damen) also uses lard in all its doughnuts except the old fashioneds. But it has the most ridiculous variety of fillings of any shop in the city: not just jelly and custard, but also lemon curd, Nutella, Nutella and banana, and Biscoff.

Firecakes Donuts (various locations, including 68 W. Hubbard) uses lard in everything. But if this is not a deal-breaker, there is a traditional jelly doughnut, a peanut butter and jelly doughnut, and, best of all—to my mind anyway—a seasonal pistachio old fashioned.

The restaurant version of the law of supply and demand states that the longer you have to wait in line, the more valuable and boast-worthy your dining experience. By that criteria, the most rare and precious jelly doughnuts in all of Chicago are those served at the Doughnut Vault (various locations, including 401 N. Franklin), which produces a limited quantity each day and closes its doors as soon as they’re sold out. To avoid a broken heart, check Twitter for daily flavors and how many are left.