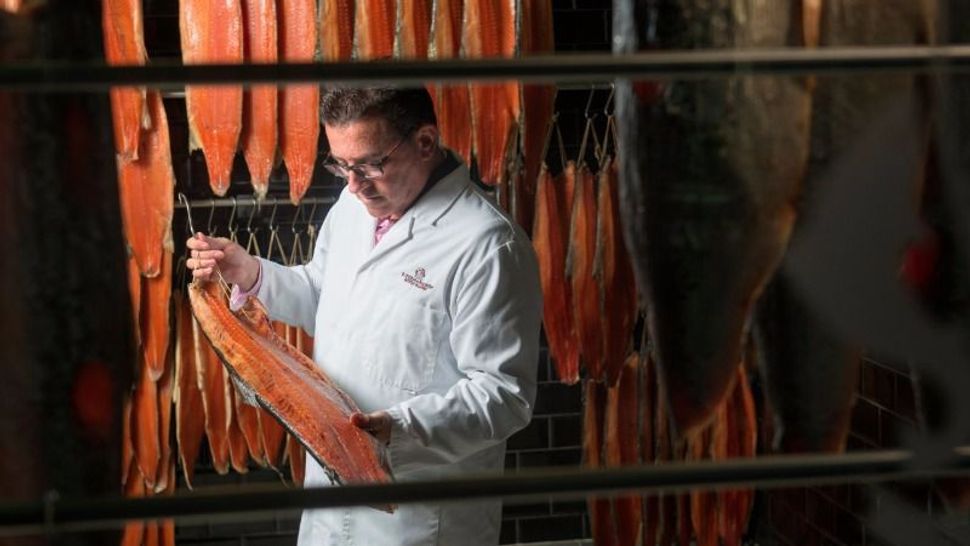 Lance Anisfeld, here inspecting smoked salmon, is commonly known as Lance Forman to match the name of the family-founded company he heads. Image by Courtesy of H. Forman & Son

GLASGOW — Nothing enhances a basic bagel with cream cheese like ribbons of smoked salmon.

In the U.S. we tend to refer to this sometimes silky, sometimes slimy (always orange-pink) fish as lox. (This is a colloquialism. Lox is technically salt-cured or brined; never smoked.) The word comes from the Yiddish word for salmon, lax. But in the United Kingdom, where smoked salmon became popularized, “We never call it lox,” said Ondine Sherwood, whose father, Joss Sherwood, ran the British Smoked Salmon Company, inherited from his grandfather, Solomon Scheinbaum. 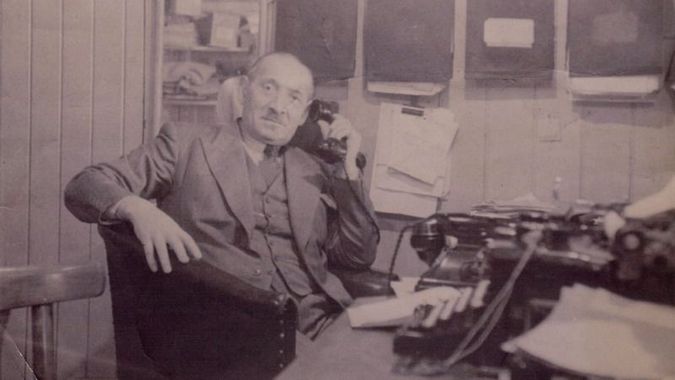 For decades, smoked salmon was not seen in Britain as a Jewish bagel topper. Rather, it was considered a luxury food, said Ethan Forman, head of U.S. distribution for H. Forman & Son, the world’s oldest smoked salmon factory, established in 1905 in London.

“Jews invented it and were the ones producing it, but Jews were not the ones eating it,” said Forman. “It was royalty and aristocrats — people who could afford it. Jews were not part of the wealthy class in the early- and mid-1900s.”

FISHY PAST
Smoked salmon was brought to the United Kingdom by East European Jewish immigrants who were fleeing the pogroms of Ukraine, Russia and Poland, explained Lance Anisfeld, who is commonly known as Lance Forman to match the name of the family-founded company he heads. H. Forman & Son was founded by Anisfeld’s great-grandfather on his mother’s side, Aaron Forman, known as Harry.

These immigrants started smoking salmon as a way of preserving fish; there was no refrigeration in those days. According to Anisfeld, the first fish they smoked was for themselves, and came from the Baltic in barrels of seawater. But once community members started shopping at the Billingsgate Fish Market, they saw amazing salmon coming from Scotland. 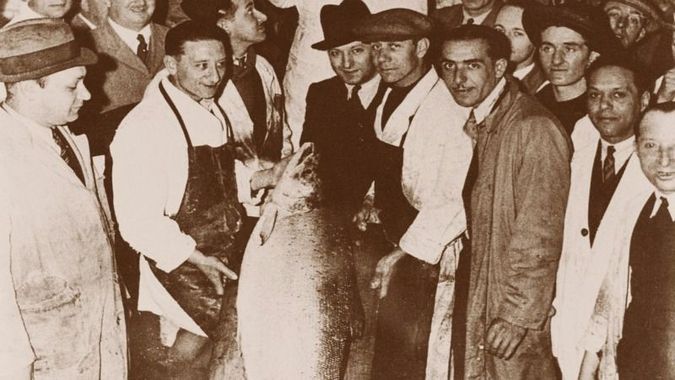 A senior Forman in 1935, in Homberg hat. Image by Courtesy of H. Forman & Son

“The thought was, why import Baltic salmon when they can use Scottish,” said Anisfeld. “When they started smoking the Scottish salmon they thought it was amazing and that others might be interested, too. That’s how the Jewish smoked salmon businesses got started. Ultimately, smoked salmon became the first British home-grown gourmet food, and if done properly, it still is that today.

By the 1930s, smoked salmon was being served at royal banquets and at some of the U.K.’s most famous food halls and restaurants, including Harrods luxury food and wines in London.

Sherwood’s grandfather started his business after World War II in London’s East End, where he owned four houses. He converted the front of one of the houses into a storefront, and they smoked the salmon in the backyard.

As a little girl, Sherwood would go with her dad to work and play on the typewriter. The smoked fish had a very strong smell and the whole place was grimy and greasy — the nature of the product, she recalled. 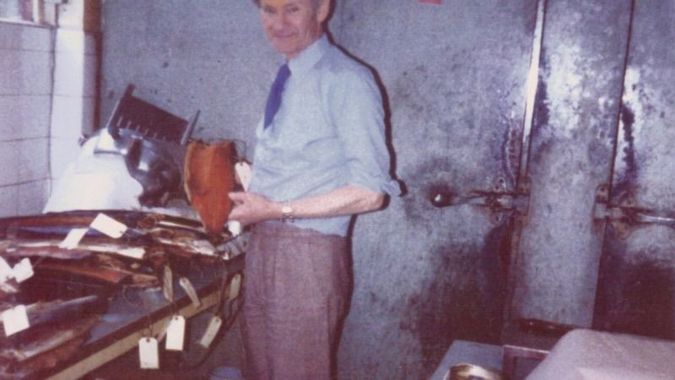 Sherwood’s father used to bring smoked salmon home from the shop for the family. She reminisced about how he would meticulously slice a side of salmon for the family, always clipping the wing (also known as the salmon collar or buffalo wing of the sea), with its fatty, chewy flesh, for her to taste. A family favorite was a smoked-salmon sandwich with cucumber and lemon on a bridge roll.

“It was all Scottish salmon, and it was not farmed,” said Sherwood with pride. “My father had great reverence for salmon. He considered it a noble fish in many ways. We called it the king of fish.”

MY LOX IS BETTER THAN YOUR LOX
Scottish salmon is part of the Atlantic salmon family, Forman said, explaining that there is also Pacific salmon and Chilean salmon, among other varieties.

“It is not that one is better or worse, but they are definitely different,” said Forman. “The fat lines and density of Scottish salmon make for better smoking.”

The life cycle of a salmon is that it is born or hatched in a river, and then swims downstream to the sea, where it spends the majority of its life. However, when a salmon is ready to lay eggs, it swims upstream and back to the river.

Sherwood said Scottish salmon are very strong because they have to swim upstream in some of the fastest-flowing and cold waters, including up waterfalls, which builds muscle and density.

There are also low contamination levels in Scottish waters, according to Forman, whereas Chilean salmon has had contamination and bacteria challenges and Alaskan salmon faces problems due to high pollution in the area.

Scotland’s Stanley Bernard has been exporting fish and seafood to Europe and North America since 1975. He said Scottish salmon is the most highly-prized salmon variety, describing it as tender and buttery. When it comes to smoked salmon, he compared Norwegian to Scottish with a quote from GourmetFoodStore.com: “If you like a smokier flavor, go for the Norwegian smoked salmon. If what you want is the more buttery, subtly-flavored smoked salmon, you’ll never go wrong with the Scottish variety.” 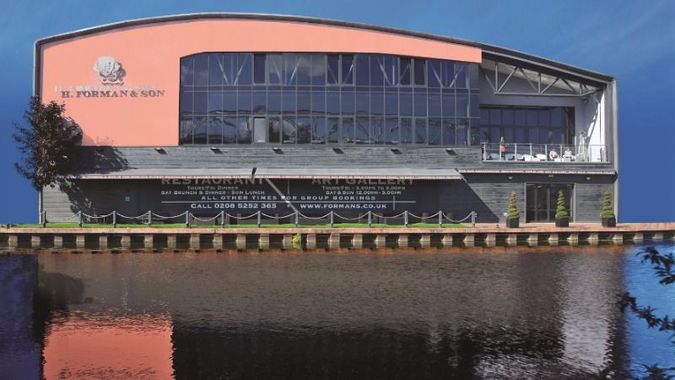 Scottish salmon has been awarded Protected Geographical Indication (PGI) status by the European Commission, setting it alongside Champagne, Arboath Smokies and Parma Ham, according to the Scottish Salmon Producers Organisation, which represents members of the Scottish salmon business on political, regulatory, media and technical issues in Scotland, the UK, EU and internationally.

Anisfeld said Scottish salmon has a “sweet, wonderful, natural flavor,” so when they smoke it, they don’t need to add too much smoke. Rather than using fire to create the smoke, they use a technique called friction smoking, grinding a wheel and wood to create smoke friction, like rubbing two sticks together.

Bernard said the salmon is so good that even the trimmings can be enticing. He laughed remembering how many years ago, when he owned a small chain of Freezer Centres and used to stock a pet food product for cats made from smoked salmon trimmings, a little old lady used to come into one of the stores and regularly bought this product.

The woman came in one day and complained they were out of stock and explained how she loved the product and asked when it would be back in stock.

“The manager said, ‘You mean your cat likes the product?’” said Bernard. “‘No, no,’ she said. ‘I love it.’ We had to explain it wasn’t really meant for human consumption. I don’t think we saw her again.”

NOT AN INGREDIENT
European Jewish immigrants also brought smoked salmon to the United States. However, unlike in the United Kingdom where smoked salmon became “an everybody food for Jews and non-Jews,” said Anisfeld, rampant segregation in the early 1900s meant less sharing of traditions and foods, said Forman.

“Lox probably stayed within the community, for the Jews,” said Forman, describing why he thinks smoked salmon was associated for many years with Sunday morning brunches at Bubbie’s house. “In Western Europe and the UK, international cuisines were shared a little more.”

H. Forman & Son is the last surviving of the original kosher smoke houses in the UK (Sherwood’s father sold his company to Forman when he retired). In Scotland, one can get kosher smoked Scottish salmon at Mark’s Deli in Glasgow. In London, Forman is the main supplier.

Anisfeld said that fish farming and machine-made and mass produced smoking and curing has driven down the quality and price of smoked salmon, especially in the U.S. He said he spends a lot of time trying to “re-educate chefs that this is a luxury food.” Nonetheless, the U.S. is the largest export market for Scottish farmed salmon (followed by France), according to the SSPO.

“Our fish is not just an ingredient,” Forman said emphatically. “It’s smoked salmon from Scotland!”