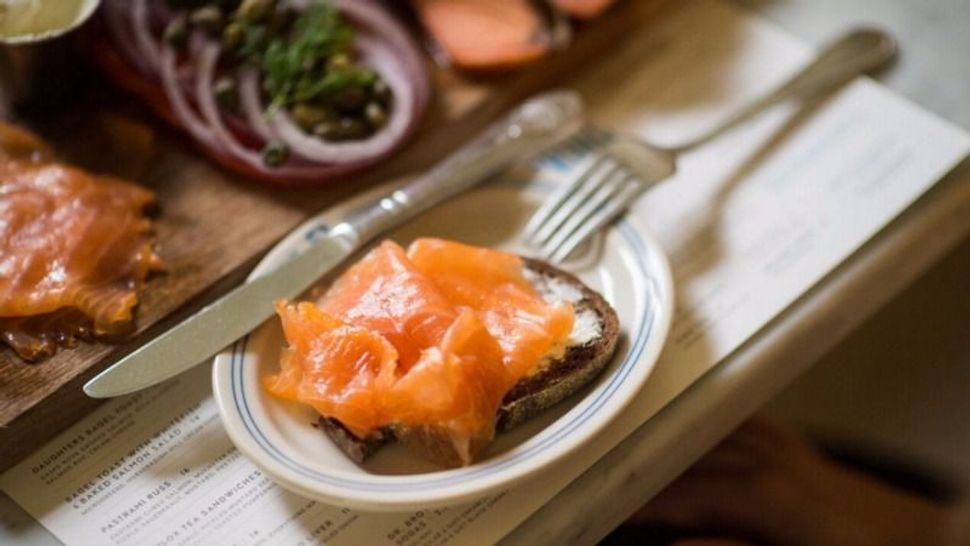 Leave it to the 21st-century scions of a venerated 103-year-old smoked fish emporium to figure out how to serve a restaurant brunch on Saturday mornings to Sabbath-observant Jews — and anyone who can’t stand late-morning lines.

Niki Russ Federman and Josh Russ Tupper, the 4th-generation owners of Russ & Daughters, have done just that. At Russ & Daughters at the Jewish Museum, they are now offering a reservation-only, pay-in-advance, kosher-compliant, fixed-menu feast.

In cracking that code, they’ve solved two brunch-related conundrums at once.

“It’s fulfilling two needs,” said Federman. “Brunch is a great idea in theory, but the reality — especially at Russ & Daughters — is that it’s our busiest time of the week and the wait is long. Now on Saturdays people can avoid that headache of having to wait for an hour or two.

“And it’s important and exciting for the observant community to have Russ & Daughters on Shabbat and know that it’s kosher, it’s under supervision, we’ve considered all the Halachic ramifications around doing this and our plan has been approved. So they can enjoy brunch knowing we’re preserving and protecting the Sabbath space for them.” 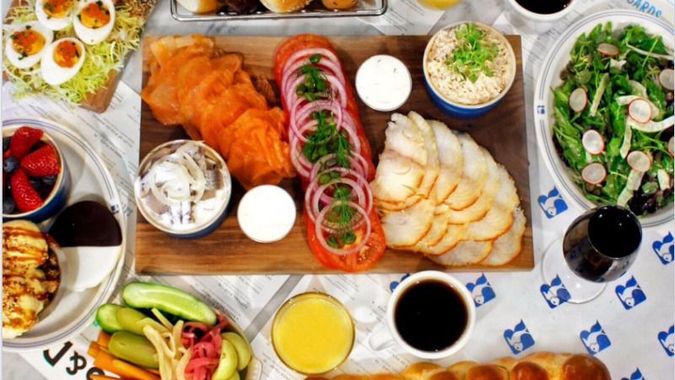 The set-menu Saturday brunch spread. Image by Courtesy of Russ & Daughters and the Jewish Museum

The set menu consists of an appetizing platter, deviled eggs topped with Alaskan salmon roe, pickles, salad, a bread basket and dessert plate, and comes complete with challah on every table and wine and grape juice for Kiddush.

“For people observing Kiddush it’s there for them, and people who don’t will say, ‘challah is delicious and I’ll have some wine,’” Federman said. “I think there’s a really beautiful way in which people — no matter what their religious identity and observance level — are going to come together and get meaning from it in various ways.

The plan is being met with enthusiasm both from the general public and the religious community. “Those two things aren’t always compatible, but in this case they are,” Federman says.

Open since March 2016, Russ & Daughters at The Jewish Museum is a restaurant and appetizing counter on the basement level of the building. Shabbat elevators will run on Saturdays, and the museum is open free of charge. 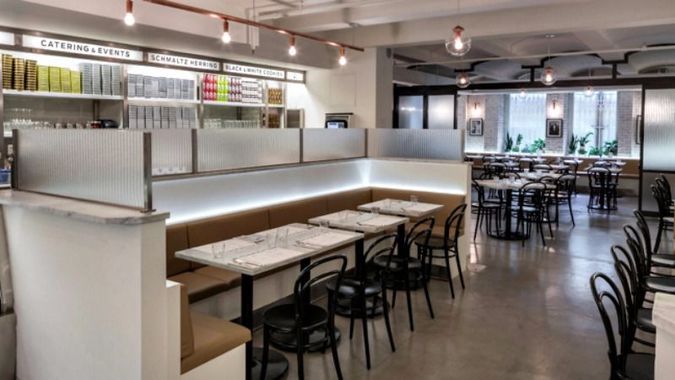 Russ & Daughters at the Jewish Museum. Image by David Heald

The brunches begin Saturday, January 28. The cost is $50 per person and includes gratuity. Make sure to reserve and pay online, as walk-ins won’t be accepted. The rest of the week, reservations are not accepted. (Russ & Daughters Cafe on the Lower East Side takes reservations only for dinner after 5:30 p.m. Monday–Thursday and after 6:30 p.m. Friday, Saturday and Sunday.)