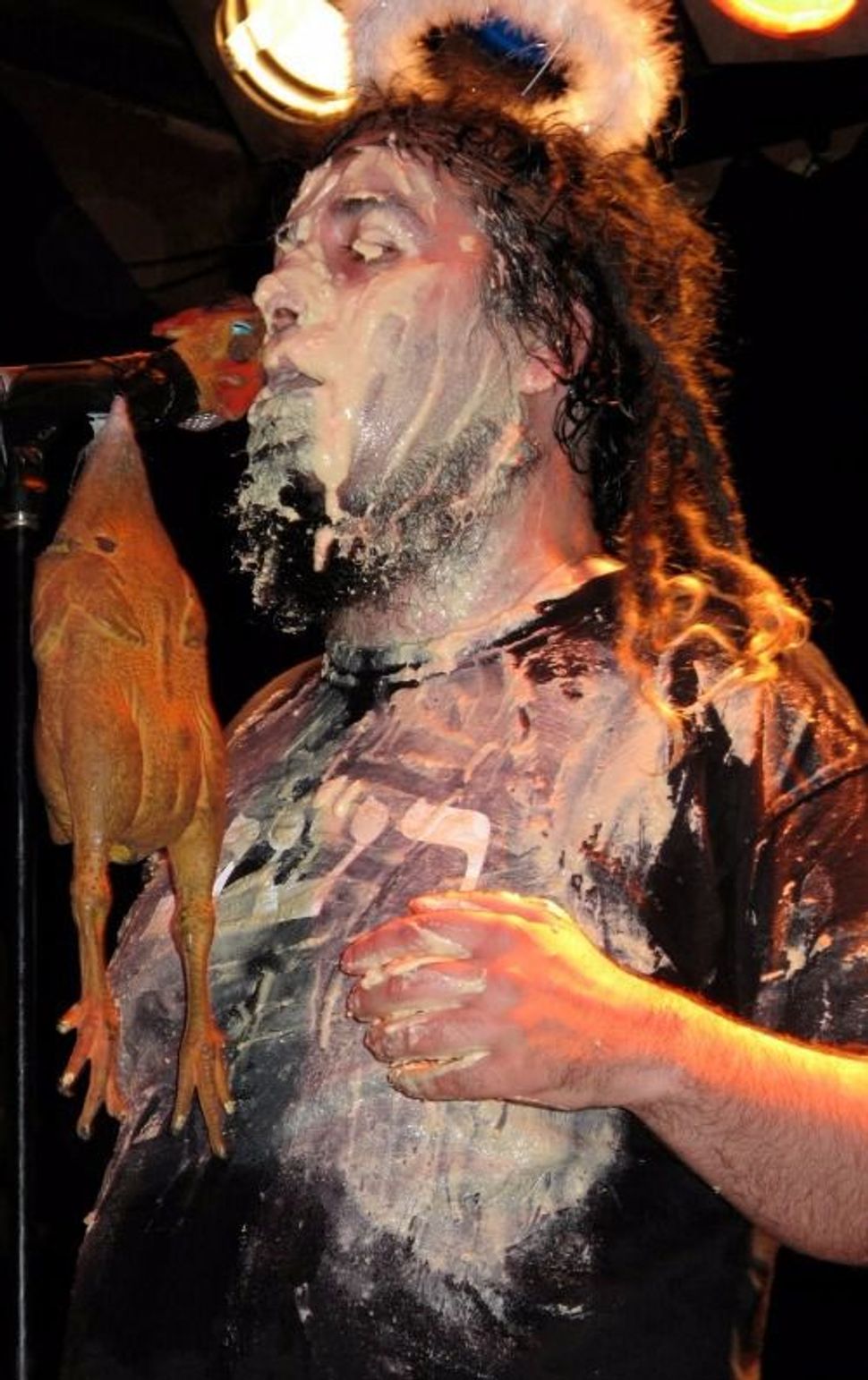 Yidcore singer Bram Presser drenched himself in hummus at the band’s farewell show in 2009. Image by Courtesy of Yidcore 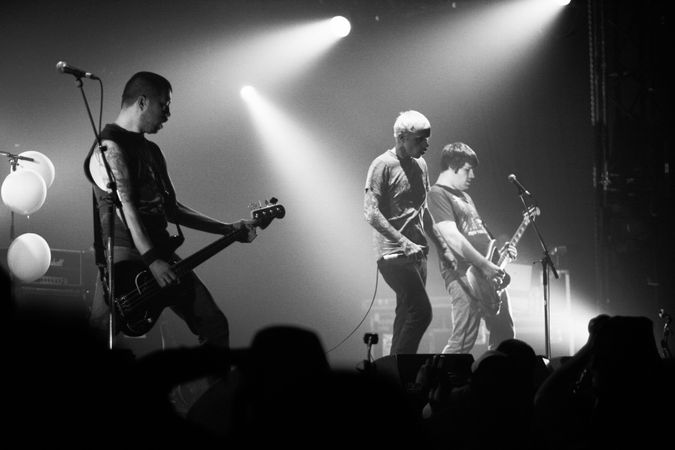 Bagels, gefilte fish, Manischewitz, and other Jewish foods were used — and thrown — at Jewish punk concerts.

In the early 1990s, Gefilte F*ck singer Howard Hallis would take the stage clutching a bottle of Manischewitz wine. The Los Angeles band threw matzo, chocolate gelt and even its eponym at concertgoers. At one raucous show, Hallis emptied a container of gefilte fish into the mosh pit. The smushed, slimy, stinky fish pieces went all over the place, and people slipped around on them while moshing.

Jewish punk bands are punk rock bands that overtly put their Jewish identity front and center as part of their music and/or gimmick. These groups present an unconventional take on Jewish culture, often comedically. Some of the key Jewish punk bands in my book, “Oy Oy Oy Gevalt! Jews and Punk”, playfully used Jewish food and drink during their live shows, considering them familiar, resonant entry points to Jewishness that listeners could relate to. Many punk rockers are known for wild, out-there performances, and the powerful symbolism of Jewish foods meant that Jewish punks used them in silly, strange ways at gigs.

It’s hard to ignore that throwing around food violates bal tashchit, the Jewish environmental principle cautioning against destruction and waste. In the case of gefilte fish, sentient animals suffered and died for no good reason. In a serious discussion, there is no ethical justification for all this waste. In the context of punk rock shows, the playful use of food is intended in the spirit of letting go from such concerns and having zany, Jewish fun.

Jewdriver professed their love for bagels, including with the refrain “I love bagels!” in “Bagel Song.” At live shows, Jewdriver would distribute bagels to crowds. While some fans ate the bagels, many threw them at the band. On the 924 Gilman Street DVD, Jewdriver’s drummer hurled a bagel back at the crowd before tapping her drumsticks together to begin “Bagel Song.” On the first night of Hanukkah in 2006 in San Francisco, one bagel landed on the bassist’s sombrero. Stuartstein stuck an Israeli flag in a bagel before inserting it into his shirt pocket. The following night in Berkeley, Jewdriver gave out bagels before tour-mates Yidcore played, so it was Yidcore that got pelted with bagels.

In the liner notes to their CD, Jewdriver criticized people “who have no sense of humor” and instead championed “learning how to laugh at yourself.” Jewdriver’s shtick was meant to be mindlessly enjoyed, not ethically debated, even if that isn’t a satisfactory justification.

Though far from their native Australia, Yidcore must have felt right at home during the bagel fight. Yidcore was notorious for getting playful onstage with hummus, kosher wine, latkes and other Jewish foods. “Once I tried to do an internal falafel on-stage,” singer Bram Presser told The Jerusalem Post. “I put all the ingredients in my mouth—tahini paste, falafel mix, salad—and then jumped up and down.” Presser vomited all over the place and felt sicker than ever before. 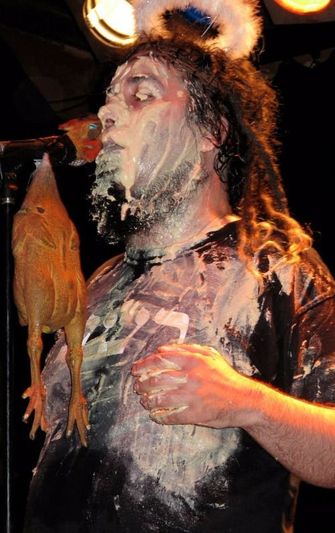 Yidcore singer Bram Presser drenched himself in hummus at the band’s farewell show in 2009. Image by Courtesy of Yidcore

Yidcore’s onstage messiness, particularly with hummus, got them in trouble with venues. Presser allegedly threw around so much hummus at the legendary CBGB in New York that he had to clean the stage afterward. He sometimes smeared hummus on himself during concerts, saying that there were “endless possibilities for hummus as a spreading-on-self condiment.” At the band’s farewell show in 2009, Presser drenched himself in hummus, covering his face, hair, beard, fingers and shirt. When asked what legacy Yidcore left behind, Presser replied, “Filthy hummus-soaked stages around the world.”

Yidcore innovatively washed it all down with kosher wine. For Yidcore’s “shofar shots,” one person would pour wine down a shofar and another would drink it from the other end. Presser imbibed this way, he let the audience partake, and the antics continued backstage.

Yidcore’s shofar was covered in animal rights stickers, which arguably neutralized any exploitative-of-animals messages suggested by using an animal’s body part. Similarly, when Yidcore members took “chicken soup shots” as part of their onstage shtick, Presser’s were vegetarian. Indeed, many Jewish punks are vegetarian or vegan. As Yidcore pointed out in one album’s liner notes, the band “supported a cruelty-free, egalitarian lifestyle. Despite the dumb stuff they do.” Yidcore might have fooled around but ultimately sought to come out ahead with regard to being ethically grounded.

Jewish punks have not limited their playful use of Jewish foods to the stage. KOSHER had a song where they boasted about farfel, bagels, gefilte fish and hamantaschen, but after one band member suggested a cheeseburger, the response was an emphatic “No!” In the song “Get Kosher,” Total Passover declared, “Lips that touch swine will never touch mine.” The transgender Jewish punk band Schmekel hilariously sang about wanting to eat homotaschen. In the novel “Tales of a Punk Rock Nothing,” the main character threw hamantaschen at other punks. These lyrical and fictional examples are consistent with what Jewish punks have creatively and playfully done at shows, but there’s one key difference: They don’t actually waste food.

In punk, there is a disconnect between deliberately outlandish, destructive actions vs. progressive ideals and social justice advocacy. In the case of Jewish punks, the latter plays out as tikkun olam and a do-it-yourself take on healing the world. The embrace of tikkun olam by many Jewish punks is genuine, but among others (and sometimes the same ones), the disconnect is still there.

Michael Croland is the author of “Oy Oy Oy Gevalt! Jews and Punk,”