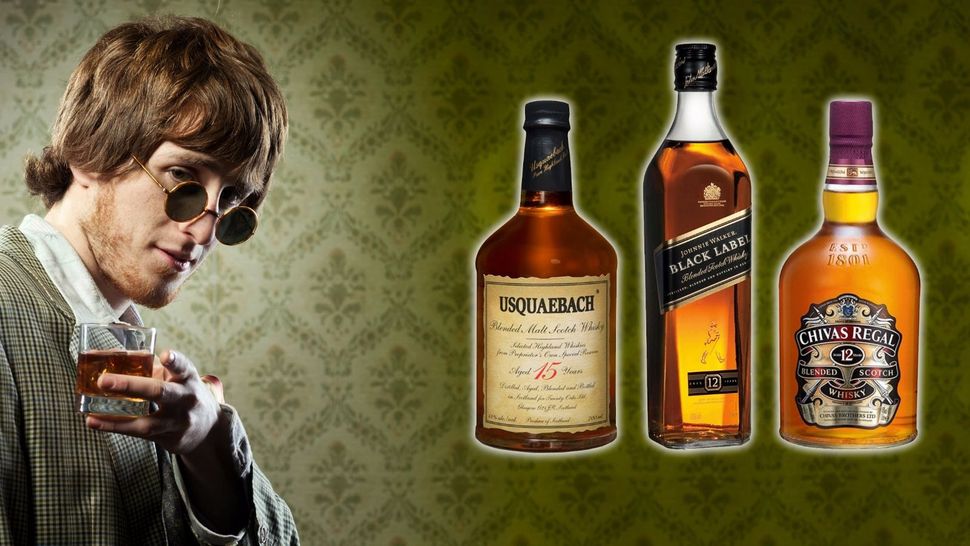 Everything ’70s is new again. Image by Anya Ulinich

Polyester pants, shag carpets and Elvis in Hawaii. The ’70s was a different world, one with quaalude eyes, avocado green shower cubicles and 8-track players. It was a world where cigarettes were cool, where salad meant “add mayonnaise” and where a gentleman’s whisky was a Scotch blend.

A single-malt Scotch is made from various different barrels in a single distillery in Scotland, the youngest of which must be older than the age statement. A blended Scotch is made from different barrels from a variety of distilleries in Scotland — again all older than the age statement — but the choice available to the bottlers should make for a good reliable whisky at a more reasonable price.

As with all Scotch there are stringent regulations about what can go into a blend. But, blends can also include whiskies from other grains. And, though there are also American blended whiskies, at the moment there are very few regulations as to what they can contain.

So, since history is repeating itself from fashion to White House falsehoods, I thought it would be worth taking a sip of the kind of blends that got splashed on 1970s rocks. And, seeing if there are any new blends that are of interest.

Recipe 21
roughly $15, but not sold
This is totally unfair to include. It’s important to know that. This is explicitly a baseline. You would never knowingly drink this or buy this “well whisky” — that is, a cheap whisky that a bar could just serve as generic or in some cocktails. But I happened to be drinking it while writing this piece, and thought that it would be good to know what, effectively, would be the worst, cheapest whisky that you’d ever buy to drink neat. And I was surprised that it was relatively pleasant — a sweet, fruity blend from New York State. It is slightly reminiscent of warm armpits and baked peaches.

Usqueabach 15
roughly $80
Named after the Gaelic word for whisky, uisge beatha ‘water of life’ (normally transliterated as “usquebaugh”) this is a venerable blend that was reputedly served at the Nixon inauguration and, under new ownership, is making a bid for relevance in America. It has a good, strong sparkly flavor that highlights citrus in the middle of a deep noted whisky. It’s a little pricier than the other blends here but definitely holds its own against comparably priced single malts.

Johnnie Walker Red Label
roughly $25
The striding man in the distinctive (and easily stackable) square bottles with the slanted labels is one of the whisky world’s most iconic of brands. I was going to try the Black Label which is a little fancier (the order basically goes Red, Black, the new Double Black, Green, Gold, Platinum, Blue) but I happened to have some Red available so I thought I’d save the Black for a later date.

There’s a reason that Johnnie Walker is like currency around the world. It’s totally dependable. Like drinking straight fire in a good way. It’s clear and honest, perhaps, in a 1970s usage, it’s ”manly” tasting. A great simple, staple whisky.

Tullamore D.E.W.
roughly $25
The D.E.W. of this expression refers not to the morning sole dampener, but, reputedly, the initials of a manager at the Tullamore distillery in the 19th Century, named Daniel E. Williams. This blended Irish whiskey (with an “e”!) is a lovely gentle sweet whisky, just as you’d expect of a blend of triple-distilled Irish whiskies.

Chivas Regal 12 year old
roughly $25
One of the other most famous brands, along with Johnnie Walker and Dewars (which I’ll taste another time), Chivas has a cachet but I find it undrinkable. It’s rough without being interesting, and the mild smoke and mild sweet seem to compete without resolution. So, for me (if not for you) it’s usable to drown out Valentine’s Day, or to wash swastikas off the subway, but not for much else. Sorry!

Correction: This article was corrected on February 10, to accurately reflect the acceptable grain content of Scotch blended whisky.