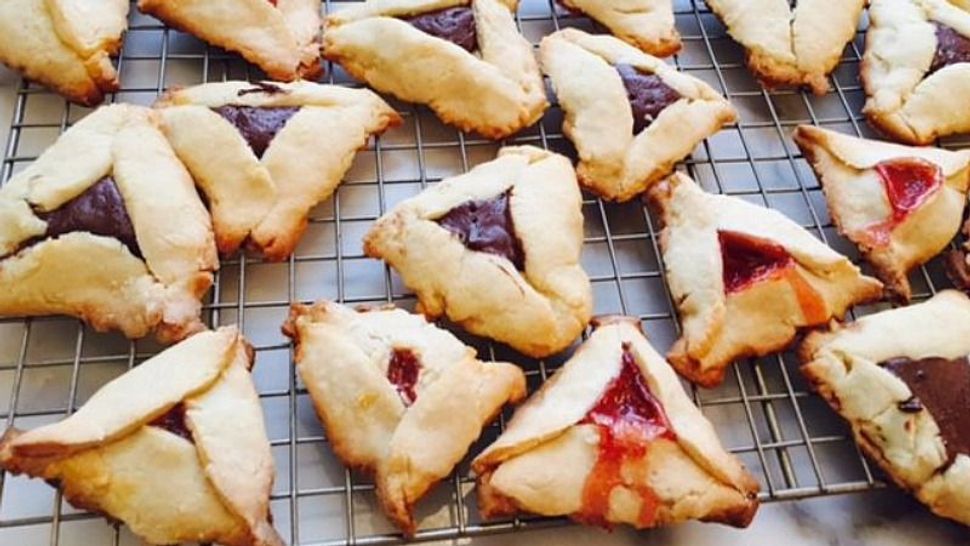 In the beginning, there was mun. And it was good.

Mun, sometimes spelled mohn, is the Yiddish word for sweet poppy-seed jam. It was a key ingredient in many Eastern European baked goods, from mohnbrötchen (poppy-seed bread) to munstrudel (a sweet, swirled bread). So it’s no surprise that Ashkenazic Jews used mun to fill their hamantaschen, the triangular-shaped cookies that are eaten on Purim.

Hamantaschen, literally “Haman’s hat,” remind us of the bad guy from the story of Purim, who hatched a plot to kill the Jews of Persia. But we also have Queen Esther, the story’s heroine, to thank for mun. When Esther was living in the palace with her husband, King Ahasuerus, she wanted to keep kosher, so she turned down the lamb tagine and ate a lot of beans and seeds instead. Tradition says that we eat hamantaschen filled with poppy seeds also in her honor.

Back in the day, lekvar, the Hungarian jam made from sweetened prunes or apricots, was also a popular hamantaschen filling. It was used in pierogies and cream cheese cookies, too.

When lekvar and mun hamantaschen immigrated to America, they were eager to fit in with the Danish pastries and Swiss butter cookies with which they shared the bakery tray. Soon hamantaschen stuffed with cherry pie filling and lemon curd were popping up in Lower East Side kitchens, Pittsburgh bakeries and Miami coffee shops.

Today there are versions filled with Nutella, halvah, apples and chocolate chips. If your daughter is a Girl Scout, she might be interested in a Tagalong hamantaschen filled with peanut butter and dipped in chocolate. What could be more American than the mashup of the most popular Girl Scout cookie with the quintessential Jewish pastry?

Savory hamantaschen have also been sighted. MyJewishLearning.com offers recipes for one with feta and thyme and another with rosemary and balsamic caramelized onion jam. Hamantaschen lovers argue not only about the filling but also about the dough. Some like theirs cakey soft; others want them cookie hard. This dispute joins the other great Jewish food debates: sinker vs. floater (matzo balls), rugelach vs. shnecken (pastry), and mandelbrodt vs. kamishbrodt (twice-baked cookies).

The packaged hamantaschen that have been on the supermarket shelf with the Hanukkah candles since December and have an expiration date of March 2018 are likely to be cakey soft and crumbly. We think they’re delicious. Perhaps that’s because of all the preservatives in them. Or because we didn’t have to bake them ourselves.

Sephardic Jews not only eat Haman’s hats during Purim, but they also nosh on Haman’s ears. The Purim cookies known as Oznei Haman, Hebrew for “Haman’s ears,” are thought to have originated in Spain or Italy. The cookie dough is formed into bowtie shapes, deep fried and sprinkled with cinnamon sugar. The cookies are sometimes dipped in a honey-lemon syrup.

Sephardic Jews also put Haman in jail. Their huevos de Haman, or foulares, is a cheese pastry. It features a hard-boiled egg, still in its shell, that’s shackled in crisscrossed dough to represent Haman in his jail cell.

If you don’t want to end up in jail, be a wise man and don’t eat mun hamantaschen before a drug test. Poppy seeds contain a small amount of opiates — specifically morphine and codeine. One employment counselor recommends that if you’re worried, bring the receipt from your mun hamantaschen with you to your drug test.

Remember the episode of Seinfeld where Elaine fails a drug test and Peterman fires her for being an opium addict? She didn’t know why she kept failing her drug test until a guy in the coffee shop saw her eating a huge lemon poppy muffin and warned her. The Discovery Channel’s Mythbusters investigated. One of the hosts ate a bag of poppyseed bagels; the other downed an entire lemon poppy-seed loaf cake. Thirty minutes later they tested their urine, and the one who had eaten the loaf cake tested positive for opioids. The bagel eater was clean. Maybe the poppy seeds had fallen off the bagels.

Hamantaschen come around just once a year. That’s why, even though Purim is celebrated for only one day, we buy or bake enough hamantaschen to last for two weeks. Lekvar is our favorite. Cherry is next. For the folks who love mun — not us — the holiday is a rare opportunity to indulge in the gritty, super-sweet filling that they adore.

We are not binge drinkers, so we won’t stand in the back of the synagogue during the Megillah reading and doing shots of whiskey. But we are binge eaters, and we’ll eat hamantaschen until we can’t tell the difference between “cursed is Haman” and “blessed is Mordechai.” By that time, we probably won’t know the difference between prune and poppy either.

Joyce Eisenberg and Ellen Scolnic, also known as The Word Mavens, are the authors of the “Dictionary of Jewish Words” and “The Whole Spiel: Funny Essays About Digital Nudniks, Seder Selfies and Chicken Soup Memories.” They can be reached at thewordmavens.com.