Its name is Glütless, and it serves the gluten-free.

A long overdue diagnosis of celiac disease propelled Golan Yona to leave the competitive world of academia to open this tiny bakery seven months ago near Union Square, where he bakes everything himself.

Yona is originally from Rehovot, the son of two Iraqi immigrants; his father’s family came from Russia. He said food always played an important role in his family, since “food is the foremost way a Jewish mother expresses love.”

When Yona was 4, he walked in on his mother cleaning a freshly butchered chicken, and the smell and look of it was so disturbing to him that he decided then and there he wouldn’t eat meat.

“My mother tried in any possible way to disguise it, but it didn’t work,” he said. “Anything that resembled meat, I would reject. Even if she used chicken fat in rice, I would see the tiny residue of fat and push away the dish.”

He’ll occasionally eat chicken or fish now, but to this day, the San Francisco resident has never eaten beef.

Yona got his Ph.D. from Hebrew University in computer science — his specialization was computational biology, also known as bioinformatics — and came to the U.S. for a postdoctoral position at Stanford University. He went on to work as an assistant professor at Cornell University before returning to Stanford as a senior scientist.

While at Stanford, Yona had to interrupt his work for surgery in 2013. He had been diagnosed years earlier with ulcerative colitis. In 2009, he also tested positive for celiac disease after several false negatives. (Both are autoimmune disorders and can make the symptoms of the other worse.)

“I wish it was discovered years before,” he said. His surgery required a long recovery, and he resolved to be 100 percent gluten-free and began experimenting with the various flours on the market.

“Of course, there are many more options now for gluten-free bread, but many of them are like cardboard,” he said. “I ate bread for so long that I remember very well what it tastes like, and that’s what motivated me.”

Given his research background, he put the same amount of effort into making gluten-free bread.

“I took 15 types of flours and studied their properties, trying to understand how well they rise and their moisture levels,” he said, “as you cannot simply substitute a gluten-free flour for wheat flour; you have to mix different types to reproduce the same properties.” 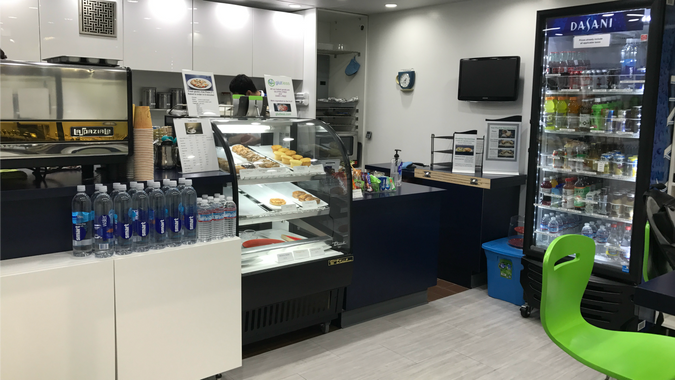 Once he was satisfied with his product, he began selling at the Galleria farmers market in San Francisco and then decided to take over a tiny former convenience store located at 325 Mason St., inside the building lobby next to Hertz car rental.

He does all of his baking in the small space. His sole employee is a barista who knew him from a coffee shop he frequented. Sallie Flores isn’t gluten-free himself, but loves the product and, more important, believes in his boss. “I’m so proud of him,” said Flores.

Glütless carries savory and sweet breads that are remarkably fluffy, fruit muffins and apple cake, as well as pizza and pocket sandwiches that can be preordered for lunch online.

“I had some Italians come and they were very encouraging about the pizza,” Yona said.

All of his baked goods are dairy-free as well, and he uses as much fruit as possible in his cakes and muffins to keep the added sugar content low.

“I have some customers with diabetes and my products don’t cause a spike in their blood sugar,” he said.

Yona just confirmed a contract with a nearby hotel to supply it with gluten-free muffins and hopes to get more such contracts, though he’s also in the market for a business partner so he can continue to grow. For now, he’s doing everything himself.

While this venture presents its own challenges, his customers keep him going.

“There’s so much positive energy from people when they come in here so excited,” he said. “We’re not just another coffee shop. We’re addressing a need. Despite our limited selection, everything is fresh and you don’t have to read labels or give instructions to the waiter. This appreciation keeps me going. It’s very special.”

As if on cue, a customer newly diagnosed with celiac disease wandered in during our interview. Yona not only sold him some bread but said he’d be happy to talk to him about living gluten-free.

Alix Wall is a personal chef in the East Bay and beyond. Her website is theorganicepicure. This article first appeared on J. Weekly.