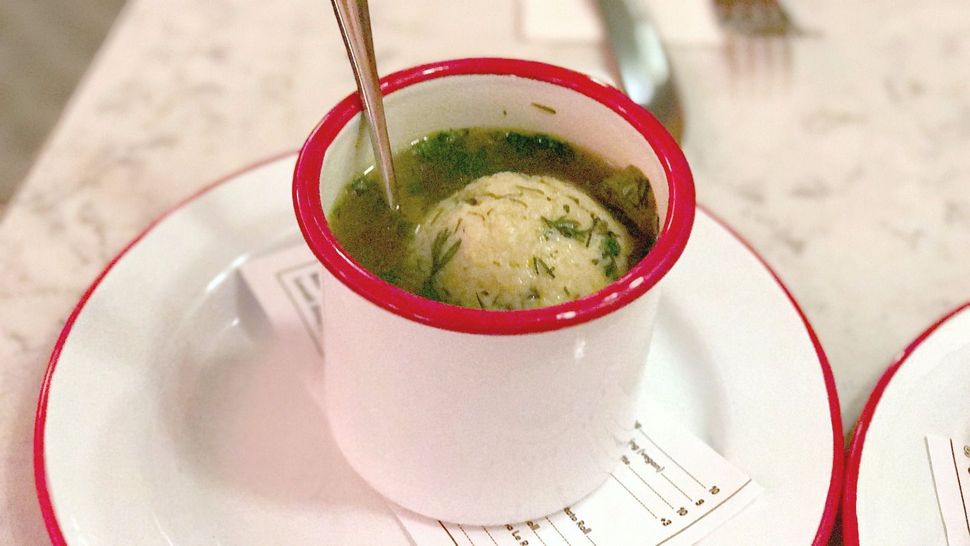 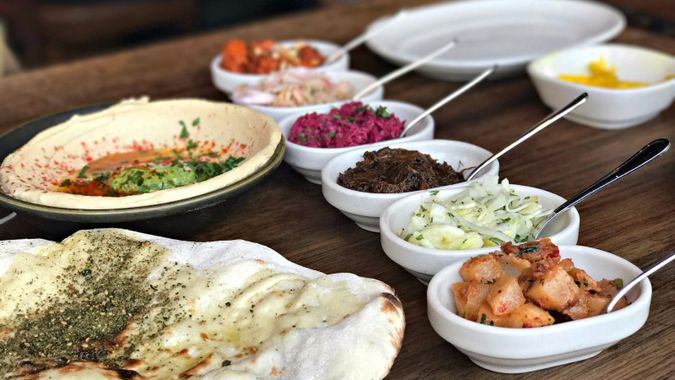 Hummus, laffa bread and salatim kicked off the meal at Zahav. Image by Liza Schoenfein

I’m writing this on the Amtrak, heading home to New York from an overnight in Philadelphia, sated and sleepy after fulfilling a food freak’s culinary fantasy: In under 36 hours, I ate at five out of six of Michael Solomonov and Steve Cook’s eateries: Zahav, Abe Fisher, Federal Donuts, Rooster Soup Company and the newest member of the Cook N Solo restaurant group family, Goldie, which opened April 1, the day I arrived in town. (I would have hit Dizengoff too, if I weren’t already well acquainted with the hummusiya’s Manhattan outpost in Chelsea Market.)

Over the last couple of years I’ve watched Cook and Solomonov’s restaurant group grow in what seems like a particularly well-considered fashion: Each of their places feels like a true, masterfully executed expression of a modest idea: great doughnuts and fried chicken at the tiny Federal Donuts; exceedingly well-made hummus and handmade pita at the funky, colorful Dizengoff; more of that hummus at Zahav, the airy, bustling flagship that also boasts beautifully seasoned grilled meats, fresh, seasonal mezze and handmade laffa bread.

Abe Fisher — with former Zahav sous chef Yehuda Sichel at the helm — manages to be a kind of high-low-Jewish Diaspora-fusion hybrid of a place, which somehow comes together exactly right.

The newish Rooster Soup Company is an amped up take on an old-fashioned soda shop-type diner, where the Southern-meets-Jewish inflected comfort food is injected with just the right amount of chefy flair (the chef in question being Erin O’Shea), without ever leaving the realm of the comfortingly familiar.

So how did I manage to hit all five of these places in less than two full days? Read and learn, my friends; read and learn.

Before I go any further, I’d like to clarify that I’m known to this restaurant group, having covered its undertakings and achievements extensively in the Forward, and having met Mike Solomonov along the way. They knew I was coming, and I let them know, according to Forward policy, that I would cover all my own costs — and that I was not writing restaurant reviews, rather recounting my personal experience of what I consider to be a kind of gastronomic vision quest. (Okay, I didn’t exactly say it that way.)

Upon arrival in Philly on Saturday afternoon, I checked into my hotel — strategically chosen for its proximity to the strip of Cook N Solo restaurants a mere seven-minute stroll away on Sansom Street. I dropped my bag and headed out for a late lunch.

My first stop was the brand-new Goldie, which had just cut the proverbial ribbon at 11 o’clock that morning. The long, narrow space is a few stairs up from street level, directly above Rooster Soup Company. Alas, by the time I arrived at 3 p.m. the restaurant had sold all its falafel and fresh pita and closed for the day. I recalculated: My first meal would be at Rooster Soup Company downstairs. 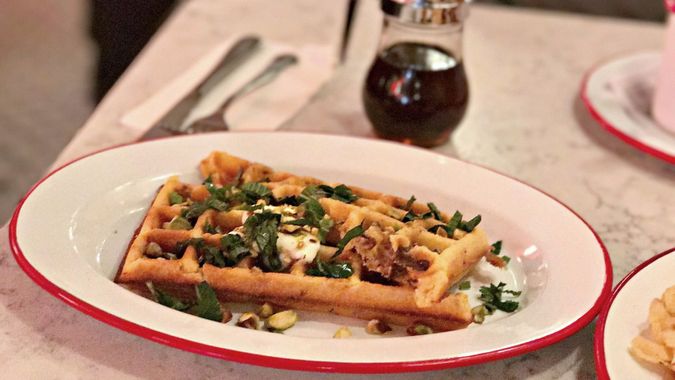 There, my dining companion and I ordered a cup of the smoky matzo-ball soup and one of mushroom barley; a BLT sandwich (the L stands both for lettuce and latke); and a sweet-and-savory cornmeal waffle sprinkled with toasted nuts and fresh herbs. 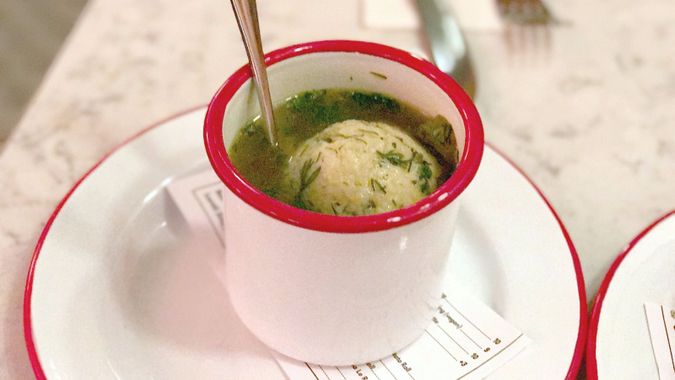 The matzo balls, if I may wax metaphoric, seemed to represent the eatery as a whole. They’re made smoky with the addition of beef schmaltz rendered from the smoked short ribs being cooked across the street at Abe. They float in a rich chicken stock made from the bones of the birds being fried at Federal Donuts down the block. The act of repurposing byproducts of other foods from within the restaurant group is central to the Rooster ethic. Additionally, all profits go to Broad Street Ministry’s Hospitality Collaborative, a local nonprofit that offers food and other social services to Philadelphia’s poor and homeless population.

Between the friendly, down-to-earth staff, the fun, delicious, sustainability-minded food and the charitable mission, the place is as feel-good as they come.

Later that night, at 9 p.m. (having made the late reservation to give myself time to work up a fresh appetite) I slipped into a dark leather banquette at Abe Fisher. The room is cozy and convivial, pub-like in a way — wooden chairs, dark gray brocade-textured wallpaper, fedoras hanging on hooks. But it has distinctly modern, even industrial elements — the view of the small efficient kitchen and the bar, crowded with locals, which turns out wildly creative and delicious cocktails. The night I went, there was a special one designed to taste like the oxtail-broth-based Vietnamese soup called pho — it sounded, frankly, somewhat disgusting (if intriguing) to me when described, but it was surprisingly good: spicy and herbaceous, with mint and Thai basil; savory in a funny but ultimately appealing way.

I had come for the “Shabbos chicken,” which is swathed in a smoky paprika rub, cooked to juicy excellence and accompanied by some sublime cooked cabbage, roasted vegetables and potato kugel, all drizzled at the table with reduced pan juices. But what ended up delighting me most was a plate of crunchy gribenes (chicken-skin cracklings) meant to be eaten wrapped in little lettuce “cups” and accented with pickled radishes. I also loved a chicken-liver mousse served with thick slices of house-made rye bread toasted and “buttered” with schmaltz. (That toast alone was almost worth the trip.)

On a platter that mixed the traditional Jewish appetizing idea of smoked fish with the Italian crudo concept, what stood out among all the offerings (among them lightly smoked salmon with avocado crème, and cobia sashimi sprinkled with a few pieces of seasoned popcorn) was a tiny open-face sandwich of whitefish salad on a thumb-size toasted potato roll, topped with a couple of small dill-pickle rounds. With that bite, memory met modern in a delightful collision of flavor and texture. 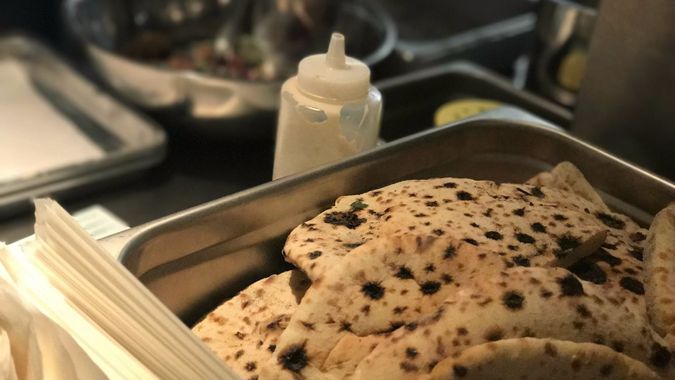 On day two, we arrived at Goldie before the pita and falafel ran out. Image by Liza Schoenfein

Sunday began with falafel at Goldie (I couldn’t take the chance that the food might sell out before I got there), followed by doughnuts from Federal. Joined by my cousin and his wife, who are Philly locals, we ordered one falafel sandwich with fresh, bright zhug sauce; the house salad (falafel on a bed of fresh lettuces and herbs, all dressed in a delicious vinaigrette and drizzled with tahini sauce); a couple of vegan, tahini-based milkshakes, one flavored with coconut; the other Turkish coffee, shwarma-spiced fries and a sour-cherry iced tea. 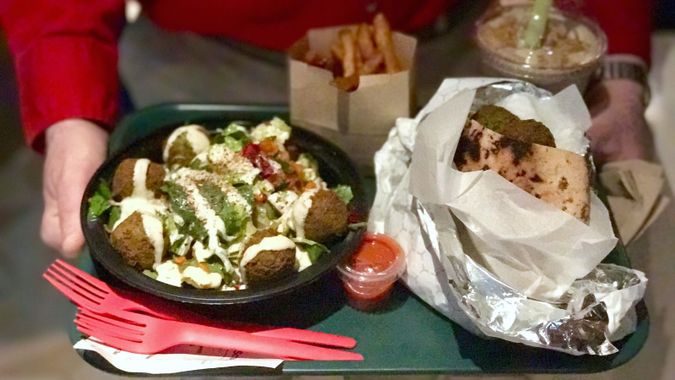 Falafel salad and sandwich, plus shwarma-flavored fries and a tahini-based shake at Goldie. Image by Liza Schoenfein

Meanwhile, one heroic member of our party ran across the street to queue up at Federal Donuts, bringing back four of the shop’s justifiably famous confections. We took our haul over to Rittenhouse Square, where we gathered on and around a wooden park bench in the sun and gorged, passing the sandwich, salad, shakes and doughnuts around and around until we all wondered if we could ever eat again.

I’d like to say I spent the rest of Sunday doing something active, but in fact, after a little walk, I relaxed in the hotel, resting up for the main event. That night, I made my way to the jewel in the Cook N Solo crown, Zahav.

Solomonov’s award-winning restaurant, which opened in 2008, is meant to invoke Jerusalem: golden limestone-lined floor and walls (zahav is gold in Hebrew), with curtained dining alcoves set off from the large main space that are designed to suggest the city’s hidden courtyards. Large rounds of laffa bread are made in a wood-burning Middle-Eastern bread oven called a taboon, often manned by Solomonov himself. The laffa — part puffed; part thin and crisp — is essential for sweeping up the creamy tahini-rich hummus for which the restaurant is best known. With the hummus we ate salatim: little plates of veggies including double-cooked eggplant, shredded beet salad, shaved fennel with preserved lemon and a roasted carrot salad that was off the hook.

The house specialty of mellow, slow-roasted lamb shoulder, burnished with pomegranate glaze, fell into luscious chunks at the touch of my fork. It came with a side of terrific Persian-style crispy rice. We also tried the lamb and beef kofte, savory little meatballs fragrant with Middle Eastern spice. (The Cook N Solo group’s spices come from Solomonov’s fellow Israeli expat Lior Lev Sercarz’s La Boite in New York.) Sirloin shashlik, little chunks of fragrantly seasoned steak cooked on skewers, was tender and juicy. The grilled meats fall under a section of the menu called Al Ha’Esh, meaning grilled over coals. They come with rice pilaf.

Stuffed almost to the gills, we ordered dessert: coffee custard coated in chocolate with blood orange and almonds and a warm, crisp-meets-creamy orange-infused konafi — a dessert of crunchy shredded phyllo — topped with orange sherbet and pistachios.

The wine list included an exciting array of bottles not only from Europe and the U.S. but also from what the wine list designates as “Israel and Palestine” and another section populated with wines from Turkey, Lebanon and Morocco.

As we were finishing up, Solomonov came over and sat down. I told him how much I enjoyed hitting each of the Cook N Solo stops, and I asked about the recent theatrical release of the film “In Search of Israeli Cuisine,” in which he traverses the culinary landscape of Israel. I wondered how life would change for him and his restaurants now that he’s being recognized not only within the food world but in the movie-going one as well. I was also curious about the effect the film’s wider release might have on the already growing national and international popularity of Israeli food.

Solomonov turned to the window behind us and pointed at a movie theater, the Ritz 5, just down the street. That’s where the film is being shown in Philadelphia. For now, Solomonov is able to keep a watchful eye on his entire close-knit enterprise. With his ventures all within his reach, he allows the food and the dining experiences to communicate the quality and range of his simple, beautifully made food. While many notable chefs open franchises in Vegas and other hot spots, Solomonov seems to be turning Philadelphia into a culinary destination of its own —one in which Israeli and Ashkenazi Jewish food shine. I know I’ll be back. Intrepid (gluttonous?) as I was, there was a lot I didn’t have the time or capacity to order.

Liza Schoenfein is the food editor at the Forward. Contact her at schoenfein@forward.com or on Twitter, @LifeDeathDinner