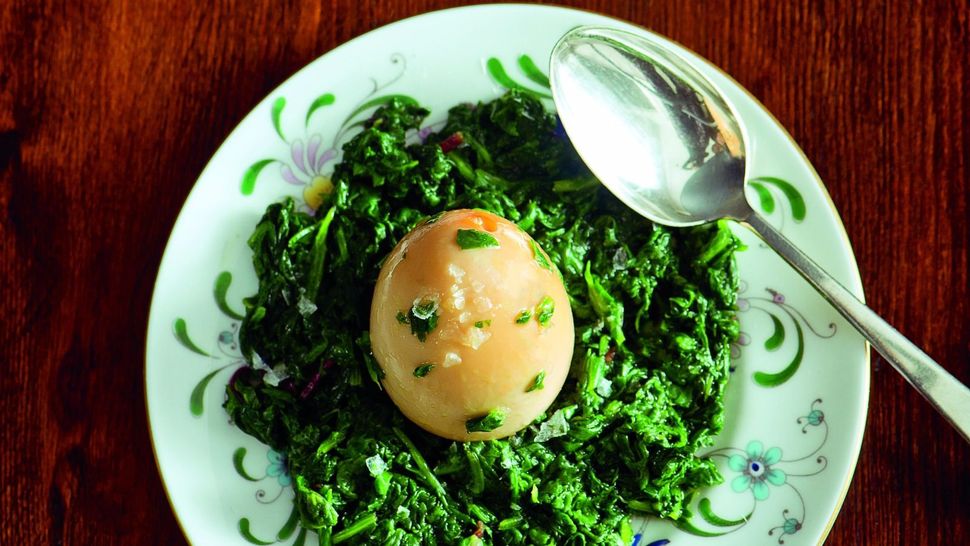 Passover is a holiday that mixes celebration with mourning. And when Jewish food’s pre-eminent authority, Joan Nathan, sits down at the Seder table this year, she will be both celebrating and mourning in more ways than one. April marks the release of Nathan’s 12th cookbook, “King Solomon’s Table: A Culinary Exploration Of Jewish Food Around The World.” But the book’s arrival is tinged with sorrow, because Nathan’s mother died in February at the age of 103.

It is fitting that Nathan’s contribution to the Passover meals, at her daughter’s home in Los Angeles, will be the last dish that she and her mother discussed: long-cooked hard-boiled eggs with spinach. It’s a recipe that holds an enormous amount of significance.

Her mother never had a good relationship with her own mother, and felt bad about it in the final few years of her life, Nathan said. The last time Nathan saw her mother, she brought her a copy of the new book.

“She looked through the book and saw the egg with spinach,” according to Nathan. “She said, ‘You started the book with my mother’s egg and spinach and onion recipe.’ I realized it was her way of thinking that I remembered her mother and that it was all going to be okay.”

The recipe in the book comes from Corfu, Greece. “But it must have been like her mother’s recipe in Poland,” Nathan said. “All these years, my mother talked about hard-boiled eggs and onions, and I never made it. And she thought it was exactly the recipe that her mother had made. It wasn’t exactly, but it’s enough. I thought, if she feels it, that’s what’s important.”

Eggs on the Seder table symbolize both renewal and the mourning of the destruction of the Holy Temples of Jerusalem. Some families just point to the roasted egg on the Seder plate. Others serve eggs dipped in salt. Nathan’s story — and her egg-and-spinach recipe — are reminders that wherever there are Jews, there is a variety of culinary riffs on religious themes.

And that’s why Nathan decided to call her book “King Solomon’s Table.”

“King Solomon, if he existed, was the first head of state, so to speak, who, for his Temple in Jerusalem and for his palace, set out to find things from all over the known world,” Nathan explained. “For me, [his is] an example not only of a diasporic nation, but also of diasporic food.”