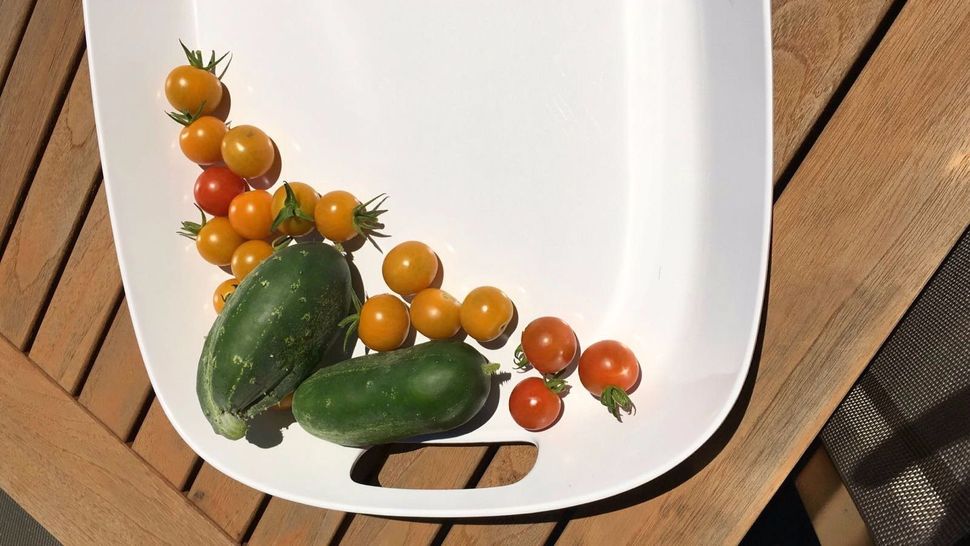 Iceberg lettuce. Pink tomatoes. Bottled dressing. The salad of my youth, a requisite part of every meal, was all that I knew, and I liked it. Start the meal with a slice of melon or half a grapefruit, move on to the iceberg salad, and then a main course.

And while salads continue to be a cornerstone of every meal I prepare, the light green of iceberg has been replaced by the dark green of arugula. Pink tomatoes of yesterday have morphed into red, brown, yellow and orange tomatoes spanning the spectrum of color and size from the very small and very sweet to the large, deep red and juicy beefsteaks. As our family moved away from the browns and beiges of Eastern European cuisine it turned to the rainbow of colorful fruits and vegetables that we have come to expect in the melting pot of New York City.

I was first introduced to a vibrant palette of food colors when living not in New York, but in Jerusalem. It was there that I was introduced to fruits and vegetables of such astounding flavor and diversity that I was in a perpetual state of awe. Intensely flavored mangoes. Eggplant prepared in a variety of ways. The fragrant pyramids of produce in the open-air markets. I felt the brown of kasha, the beige of potato kugels, the light yellow of noodle puddings sweetened with raisins give way to the sparkle and explosion of Middle Eastern spices, fruits and vegetables.

Goodbye Warsaw. Hello Aleppo. I gravitated toward the color.

And as the world got smaller and as our culinary roots became more attenuated, we absorbed the foods and recipes and diversity of cuisines that surrounded us. Pomegranate. Kiwi. Blood oranges. Red, orange, yellow sweet peppers. The light green of avocado, mashed together with purple onion, cilantro, jalapeno pepper. Color was here to stay.

A salad that you will regularly find on my table is one that I learned to make while living in Israel. It is best when made in the summer, when tomatoes, cucumbers and peppers are young and fresh and packed with sunshine, flavor, vitality. While its roots are in the Middle East, the vegetables are picked from local vines in and around New York City.

For perfectly shaped cubes of salad vegetables, use a Vidalia Chop Wizard. It makes salad preparation fun, fast and easy. Sells for about $20 from Bed, Bath and Beyond.

Combine all ingredients and serve immediately. If you do not want to serve immediately, combine only the vegetables and herbs and refrigerate. Right before serving, add salt, pepper, olive oil, lemon juice and vinegar.

Rachel Ringler is a museum docent, challah instructor and cook who has strong feelings about the important role food plays in life, in family and in community.