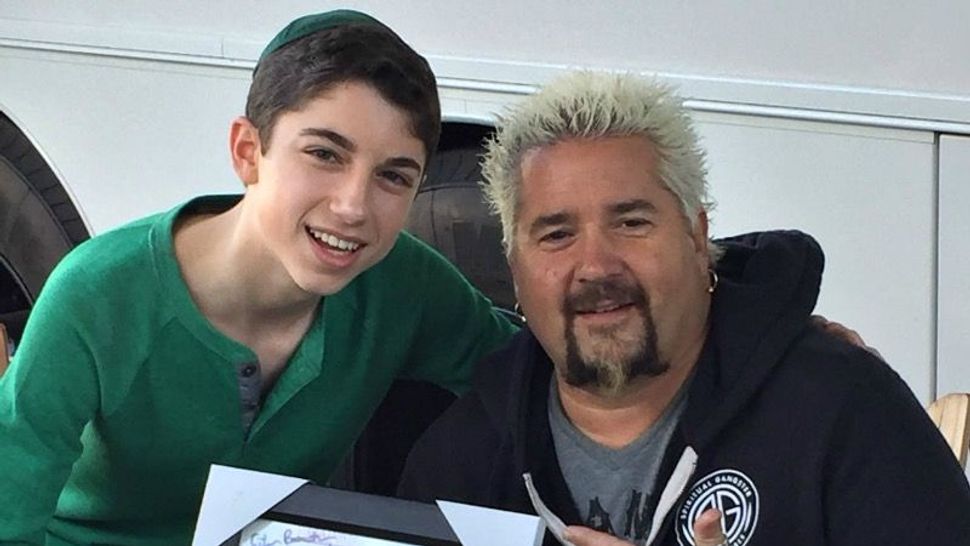 An Orthodox teen is competing on a Food Network cooking show — for the second time.

Eitan Bernath, or as he’s known to fans, Chef Eitan, is soon to appear on Guy Fieri’s “Guy’s Grocery Games.” In the show, four chefs cook with ingredients found in the supermarket as Fieri foists unusual challenges upon the competitors. The episode will air on September 24 at 8 p.m. (ET) on the Food Network.

Bernath is just 15 years old, but he already has one nationally televised cooking competition under his belt. When he was just 11 he was part of the first group of kids to compete on “Chopped,” a competition that eventually evolved into “Chopped Junior.”

Although he did not win, he soon became a kosher foodie celebrity of sorts, hired to do food demos and interviewed on radio shows and for other Jewish media. He also started a kosher food blog called “Cook With Chef Eitan.”

Bernath has long been obsessed with Guy Fieri. In 2014, he went to Fieri’s cookbook signing dressed up as Fieri, replete with a blond, spiky wig and the chef’s signature sunglasses. But it wasn’t until two years later, when Fieri published another cookbook and Bernath went to that book signing, that Bernath told Fieri about the “Chopped” episode and his subsequent career. Fieri was impressed, and took Bernath’s business card.

“I was over the moon on the car ride back, rehashing every detail of our whole conversation to my mom,” Bernath wrote on his blog.

Within the hour, he received an email from Fieri’s team, asking him to be on “Guy’s Grocery Games” for their “Superfans” episode. He was then flown out to San Francisco to film the episode with his idol.

“It was seriously the dream of a lifetime,” Bernath wrote. “I am so grateful I had the opportunity to have this incredible experience.”