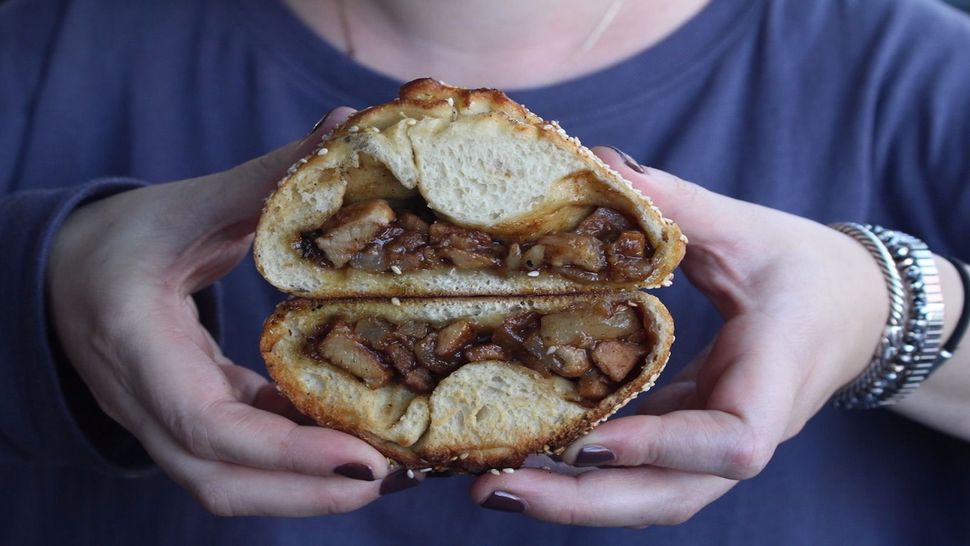 The Baogel is filled with Nom Wah’s signature sweet pork belly and wrapped in Black Seed Bagel’s sesame bagel dough. It’s served with a side of chili cream cheese. Image by Alex Ostroff

The love child of a bagel and bao bun, the Baogel — (that’s what they’ve named it) — is filled with Nom Wah’s signature sweet pork belly, wrapped in Black Seed’s sesame bagel dough, and served with a side of house-made chili cream cheese.

“It’s really inspired by the pork baos in Chinatown, hence the collaboration with an amazing dim sum empire like Nom Wah,” Daoheung said. “To be faithful, we’re using Nom Wah’s ‘secret’ pork filling. But if we continue making the Baogel, we may consider other, less traditional, fillings.”

The Baogel uses the same dough as Black Seed bagels, ”which lends it a similar texture and taste as our bagel rolls,” Daoheung said. “But the Baogels aren’t boiled, so they are not as chewy as our actual bagels.”

Creating the Baogel wasn’t as complicated as it looks, she added; “the biggest issue was getting the filling right in the center of the dough.” And there was no hesitation about stuffing a Jewish-y baked good with the most non-Jewish fillings possible. “We aren’t a kosher shop and wanted to really work with what Nom Wah is known for,” she said.

The chef scoffed when we asked if the Baogel was the treyf Cronut. “While we greatly appreciate the Cronut and what it’s done for the pastry world, we don’t want to compare this to that. Its like comparing apples to oranges,” she said. “We simply wanted to do a collaboration that makes sense for Black Seed and Nom Wah, to represent what we both do best.”

Daoheung wouldn’t reveal Black Seed’s next mad-scientist collaboration, but she did offer a hint: “It will have to do with an amazing pizza shop.”

Should we trademark the Bagizza?