This Controversial Rabbi Is Making Vegan Restaurants Kosher, One Hotspot At A Time 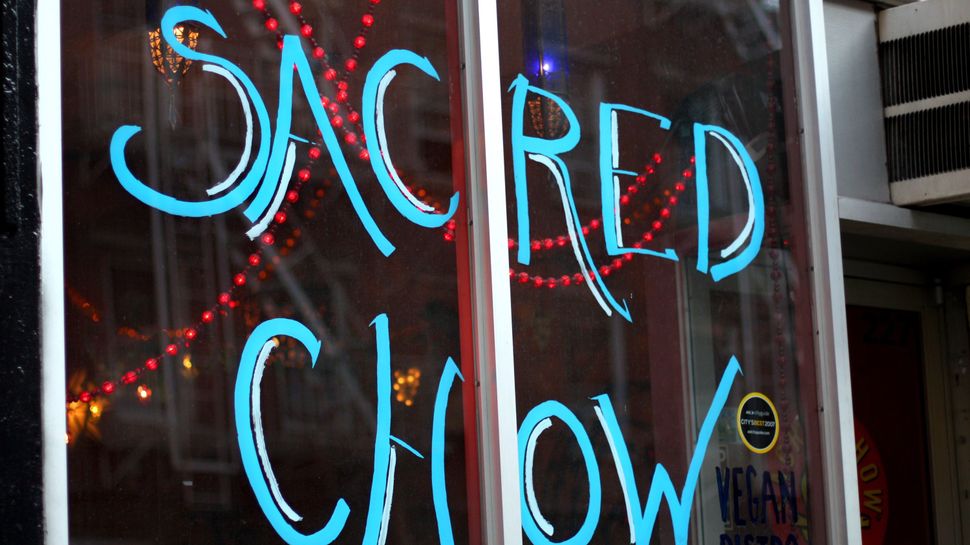 The name of the vegan restaurant Sacred Chow is hand-painted on its glass storefront. Image by sweeteats/flickr

Around 10 years ago, Rabbi Zev Schwarcz was walking the streets of the West Village when he noticed an inconspicuous storefront: There was no awning, only a simple red flag adorned with a meditating cartoon cow that flapped lightly in the wind above the hand-painted plate glass windows. The storefront — a vegan restaurant called Sacred Chow — was so tucked away that it was almost hidden from the casual passerby.

Intrigued, Schwarcz walked into the spare, bohemian space and asked to speak to the owner. When Cliff Preefer emerged, the two started talking. In the course of that conversation, Schwarcz soon found out that Preffer was Jewish, and asked him why his restaurant wasn’t certified kosher.

Preefer responded that while he wanted certification, it would be too expensive. It was then that a lightbulb went off in Schwarcz’s head: He could certify Sacred Chow in a way that was affordable.

In fact, the rate he offered was so low as to be nearly nonexistent.

“Give me a couple of meals a month [for free] and I’ll certify you,” Schwarcz told Preefer.

Schwarcz hadn’t intended to start a New York-based certifying agency. “When I moved to New York, at first I thought there was no more need for another certification in New York,” he said. “I was a Rabbi of a congregation [and] I was teaching in school. It’s not like I needed [to do this] for any kind of livelihood,” he said.

But his experience at Sacred Chow taught him that despite the large concentration of kosher-certified restaurants in New York, there were many places that were interested in being kosher, but couldn’t afford the huge fees quoted by larger, more mainstream certification agencies like the OU. And so he began cold-calling vegan hotspots in Manhattan, asking them if they were interested in becoming kosher-certified under his hashgacha, IKC. Those initial phone calls led to a few additional clients, but it was the tight-knit aspect of the vegan community that really helped Schwarcz’s business take off.

“[The vegan community] talks to each other, they know each other. And they heard that I was being reasonable and being fair,” said Schwarcz. He now certifies other vegan hotspots like By Chloe and Blossom, as well as products like Sakara, the trendy, organic meal-delivery service beloved by the fashion set.

Although certifying Sacred Chow is what put him on the map, he has been in the kosher certifying business for over 20 years. Before he branched out on his own, he worked for a major mainstream kosher certification agency. Then in 2006, while he was serving as a rabbi in Santa Barbara, California, he started International Kosher Council (IKC) with his brother, certifying restaurants and local products because they saw a significant deficit of kashrut options in the area. There, IKC functioned as a one-stop shop for businesses interested in being kosher: “[We] also acted as a consulting agency,” Schwarcz said. “If companies wanted a kosher certification, we tried to find the best match for them.”

Schwarcz is a bit of an enigma. He seems to be a typical black hatter (someone with a yeshivish background): He went to the Telshe Yeshivah in Cleveland, and was ordained as a rabbi there before working as a mashgiach. He has a recognizably yeshivish lilt to his voice — a kind of adenoidal twang mixed with a touch of singsongy upspeak that could only be developed from years learning Gemorah all day with a chavruta (a learning partner).

But his approach to kosher certification is unconventional: Unlike mainstream certification agencies, he sees himself as someone who caters to the restaurants he certifies, not the other way around. “One of the things I noticed was that some [kashrut agencies] didn’t realize that they have to treat the restaurants or factories as clients, as customers,” said Schwarcz. “The attitude I saw was that they’re doing you a favor too by being kosher certified. And so I figured I’d want to change that.”

His goal is to provide ease of entry for vegan restaurants to become kosher. “Vegan restaurants are one of the easiest to certify because there’s very little that’s not kosher that’s vegan,” he explained. “I understood what it is to be a small business, I understood what it is to be a startup. So I would give people breaks, and I would give three to four months of very low or free [services] just to get themselves started. And things like that, you know?” 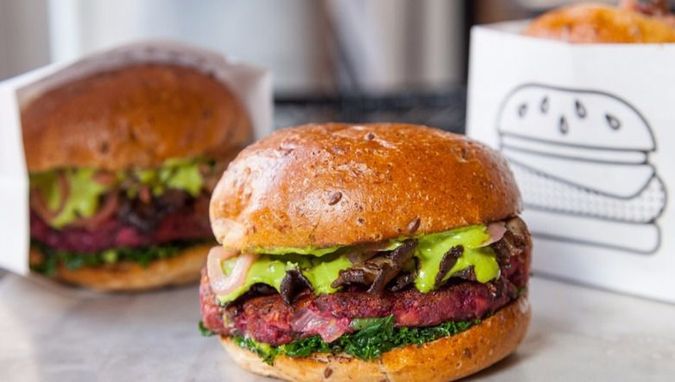 However, not everyone thinks the IKC is a suitable kashrut certification. Back in April, hyper-local Jewish news site Collive published a story in which Rabbi Kalman Weinfeld, the Rabbinic Coordinator of the Food Service Department at OK Kosher, said, “There’s no such a thing as a Kosher restaurant without a hechsher,” and that “A restaurant can be non-kosher even if they are only serving vegan.”

In the report, Weinfeld explained that the OK will only give a vegan restaurant certification if it employs a mashgiach who would be on-site during business hours. While Weinfeld didn’t mention IKC by name, or say whether it was reliable hechsher, the article implied that it wasn’t.

“I was very upset,” said Schwarcz. “No one called me to find out if I certify it or what my standards are and how I certify it.” Other mashgiachs contacted by the Forward could not be reached for comment.

He isn’t interested in the politics that so often dominates kosher certification. In fact, he actively avoids it: He once turned down a restaurant in Teaneck, New Jersey, that asked for his certification because he didn’t want to step on the toes of the certification agency that was already established in the area. On the rare occasions when he does venture into a city with an established Vaad (local kashrut council), he goes out of his way to assure the Rabbinical council that his hashgacha wouldn’t interfere with theirs. It’s why he operates out of Manhattan, and why he certifies restaurants in Brooklyn neighborhoods such as Park Slope and Fort Greene, which don’t have a Vaad. “I don’t go to Boro Park or Flatbush,” he said.

Schwarcz expressed frustration with the way mainstream kashrut agencies are set up and run. According to him, policies like a “recommended” list — a compilation of all the restaurants that the agency believes are legitimately kosher — and requiring Vaads to pay money to be part of a national organization of kashrut as a way to get on that list are “extremely evil and inappropriate.”

He contends that other certification agencies put too much stock in stringencies that are unnecessary, such as hashgacha tamidis — where a mashgiach has constant supervision, either remotely via camera or in-person — which is often financially burdensome for a restaurant. He stressed that he follows halacha (Jewish Law), but that he also wants to be fair and affordable.

Which doesn’t make his process of certification any less thorough: When a restaurant requests kosher certification, Schwarcz and his team of mashgichim will go to the restaurant and painstakingly comb through all the ingredients it uses, making sure all of them are kosher. They then check the setup of the operation: If it serves non-kosher wine, IKC will insist that it come from a separate area of the restaurant so that there’s “no chance whatsoever of any kind of cross-contamination.” If a restaurateur insists on using non-kosher wine or balsamic vinegar as an ingredient in the food, IKC won’t certify it.

After a restaurant’s ingredients and operation have been approved, the team determines the frequency of visits required. “If it’s a vegan restaurant, we’ll go once a week, then every ten days,” said Schwarcz. “And [for] the yogurt places, which is pretty much kosher — it’s ice cream — we’ll go a lot less frequently.”

In addition to stressing the ease of and affordability on offer, the IKC website also states that the mashgichim are all Orthodox and do everything according to Jewish Law.

On his blog, he often posts questions he receives via email about his certification, with his responses. He attempts to explain his certification standards to concerned customers, who ask questions about whether his vegan restaurants check for bugs (they do and the restaurants are “serious about not serving bugs”), or why he doesn’t require his restaurants to have a full-time mashgiach (it’s an “unnecessary and unfair imposition”). Even so, online forums on the topic of kashrut are riddled with comments questioning the validity of IKC’s kashrut standards. One forum commentator wrote, “My Rav says it is not reliable,” while another one expressed dismay that the restaurants IKC certifies stayed open on the Sabbath. On another forum, a user was concerned that the wording on the IKC’s website — that they “strive to do everything according to halacha” seemed suspect. However, the opinions are mixed, with many commentators supporting the IKC’s hashgacha.

Despite the criticism, Schwarcz has become the go-to agency for communities looking to adopt his independent certification model, especially in relation to vegan establishments. He said he is frequently approached by communities all over the world to help them with kosher certification. And his operation keeps expanding: Currently, the IKC operates out of eight states and four countries, including Portugal and Indonesia.

For Schwarcz, there is satisfaction beyond offering low rates and good customer service. He enjoys giving kosher-observant Jews more options: “People appreciate the fact that they [can] go to a regular place and eat kosher.”

This Controversial Rabbi Is Making Vegan Restaurants Kosher, One Hotspot At A Time