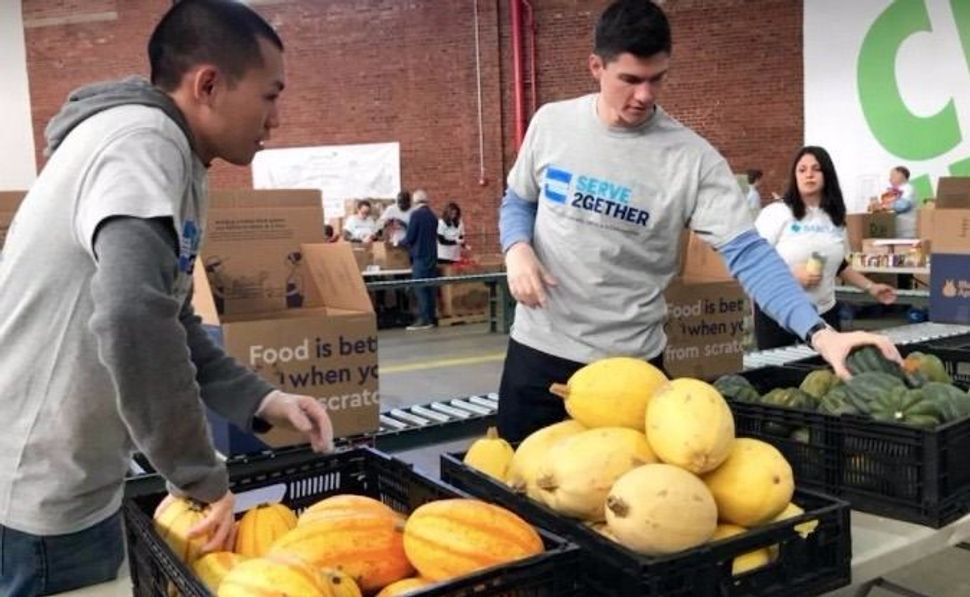 City Harvest volunteers preparing boxes of food that will be distributed for Thanksgiving. Image by Facebook/City Harvest 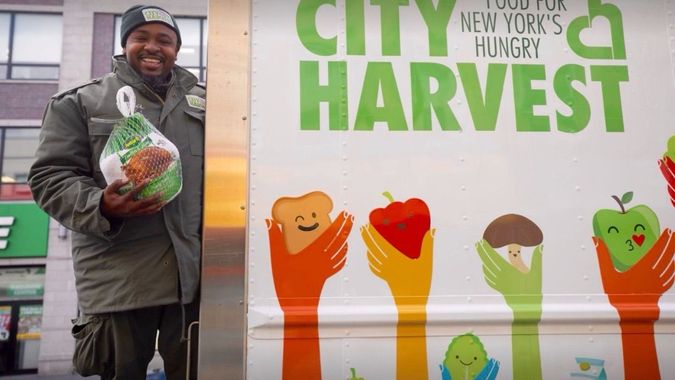 A recent email from food-rescue organization City Harvest about kosher-turkey distribution at Thanksgiving revealed a staggering figure: There are more than half a million food-insecure poor or near-poor Jews in New York City.

Hard as it is to fathom, the number is correct: One in four Jewish households in the five boroughs is in poverty — defined by the U.S. Department of Health and Human Services as having household income of below $24,600 for a family of four.

This according to data in a special report on poverty from UJA Federation of New York, created in consultation with .

While food insecurity in the Jewish community isn’t a new problem, it is one that grew alarmingly in the 20 years prior to the report’s release, and has increased more rapidly since 2002. (The UJA Federation/Met Council study is conducted every couple of decades.) “This enormous growth has occurred during a period when the number of people in all Jewish households increased by only 14%,” the report says.

What accounts for the rapid increase in poverty, who is most affected, and why?

“First of all, the cost of living has increased, whereas wages have not increased,” said Rebecca Glass, manager of City Harvest’s kosher food programs. Add to that the recession of 2008, from which many near-poor families never recovered.

“There’s anecdotal evidence that the recession plus the rising cost of living brought kosher families to poverty or the brink of poverty,” according to the report, which emphasizes that while food insecurity is more prevalent among certain groups, “No one type of Jewish household predominates in the bleak landscape of poverty.”

Russian-speaking senior citizens make up the largest group of poor Jewish households. The fall of the Soviet Union resulted in increased immigration to the United State, and a couple of decades later, the study found, with little or no work history in the United States, few in this group were able to access Social Security.

“They came to America from the former Soviet Union and there they were persecuted because of their religion, and they’re here, living in poverty and trying their best to sustain themselves,” said Allison Deal, who runs the Met Council’s kosher program.

The second-largest group is Hasidic households.

“They are seriously constrained by low levels of secular education,” the report said. “The large number of children in poor Hasidic families has undoubtedly contributed to the increase in the number of people in poverty.”

It is a misconception, according to the study, that there is not an employed adult in most of the impoverished Hassidic homes. “We know a lot of the poor households have two adults working, or working part time,” said Deal, “so it’s not just the unemployed.”

“If you have a family of six, eight, 10 kids and live a religious Jewish lifestyle, the cost of sending your kids to Yeshiva, celebrations such as Shabbat, synagogue membership — you can just imagine that there’s this tremendous gap and need that often goes unrecognized,” Glass said.

And kosher food can cost up to three times more that non-kosher food. Kosher turkeys are more expensive than their non-kosher counterparts, and the ones City Harvest distributes at Thanksgiving are underwritten by a donor, the Maimonides Fund.

Throughout the year, City Harvest delivers food — mainly fresh produce — to a network of 30 kosher emergency feeding programs in New York, four days a week, on a dedicated truck, according to Glass.

“The staff has been trained by me to recognize what a kosher product is — rice, beans, etcetera,” Glass said. “They will determine if it’s kosher or not — if there are questions, they turn to me. It’s entered into our inventory system as being a kosher product, and we provide that product to the agencies that need it.”

City Harvest ups its food distribution twice during the year, once before the fall holidays — the High Holidays and Thanksgiving — and once before Passover. 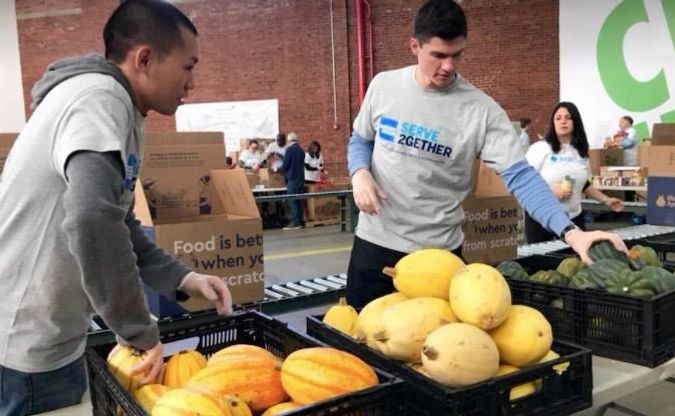 City Harvest volunteers preparing boxes of food that will be distributed for Thanksgiving. Image by Facebook/City Harvest

“We increase the amount of food — mostly produce — that we allocate to these programs significantly, so the clients who need the food can access it,” said Glass. “We increase it by roughly 400,000 pounds of extra food.”

“We try our best to have Thanksgiving distributions because it’s meaningful,” Deal said. “You’re remembering better times and you’re transported to a different place and you have your family together.”

City Harvest acknowledges that it’s only making a drop in the bucket in terms of the actual need — “because we’re limited by our capacity, the donor and our trucking capacity,” Glass said.

More is required. In a section of the report’s executive summary called “Implications” it says, “The numbers of poor and near-poor Jewish households, the enormous increase in the number of these households over the past 20 years, and the diverse groups affected by poverty create an imperative for an extraordinary response — from government, the voluntary sector, the philanthropic sector, and all segments of society. These findings suggest that the organized Jewish community needs to take a hard look at current planning, advocacy, service delivery and resource investment.”

City Harvest, the Met Council, Food Bank and the dozens of small Jewish community organizations that they support in their efforts to feed New York’s food-insecure Jewish population are a good start.

“I think we can safely say we’re not reaching all 507,000 Jewish New Yorkers with those turkeys,” said Alex Fleischman, City Harvest’s senior marketing and communications coordinator. “Someday. We’re working toward it.”

One recent development that’s helping streamline the system and may result in the ability to reach more of the city’s hungry is a new “client-interface app” for smartphones, called Plentiful. Among other functions, it can save a client’s place in line at a food pantry, and the client can reserve a time slot.

“You can say, ‘I want to go to a food pantry at one o’clock, where is there one near me?” Glass said. “You can see what a food pantry is distributing that day. Or a food pantry can send out notices to a client saying, ‘Sorry, we’re not serving today,’ or ‘We have this or that special.’”

It’s available in several languages, including Russian — “and you don’t need to provide any information except for your phone number,” according to Glass. (This is important given the increased climate of fear among immigrants in 2017.)

Masbia, which just received a donation of 5,000 pounds of kosher turkey from KJ Poultry, the largest kosher poultry producer in New York, is already using the app, and according to City Harvest, its benefits go well beyond client convenience.

“We’ll have a better idea of what hunger looks like, the landscape of hunger, through the app” Glass said. “Right now we don’t have a way of looking at that.”