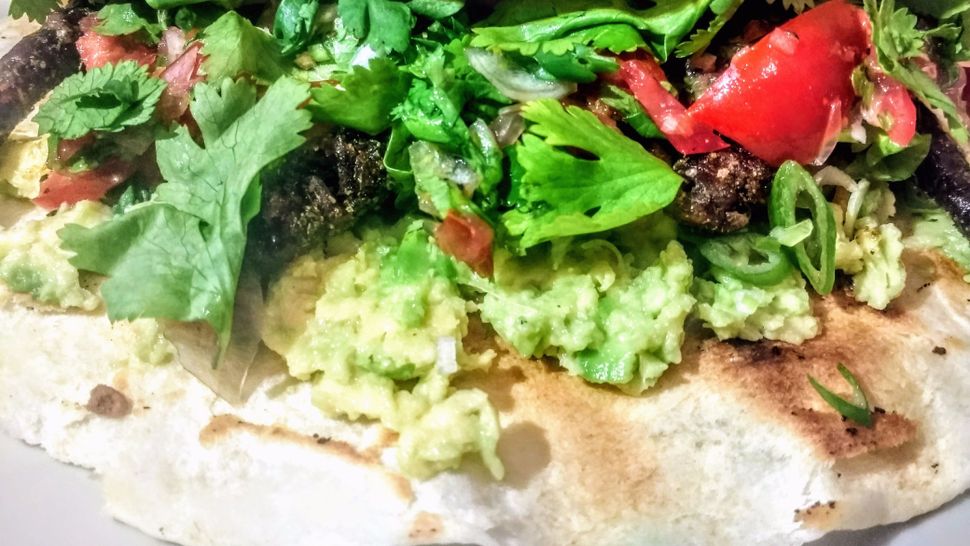 Locust Taco: Though taboo in the West, the eating of insects is commonplace for 2 billion people worldwide Image by Ilan Ben Zion

The beady eyes in my taco glare back amid the citrus salsa and avocado, and peek out from behind a leaf of cilantro. The first bite is crunchy, and faintly nutty, like toasted corn — if toasted corn came with six legs and a pair of wings. Before long I’m popping individual fried locusts into my mouth like peanuts. 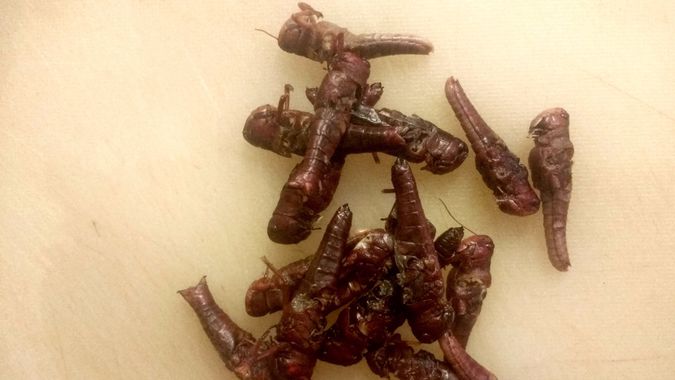 But this isn’t a street stall in Oaxaca, Mexico. I’m in my Jerusalem apartment and my girlfriend is having a conniption over the pile of disembodied grasshopper legs I’ve left on the chopping board in the kitchen. Over the phone, my mother’s revulsion is barely assuaged by the fact that — perhaps bizarrely — these critters are kosher. 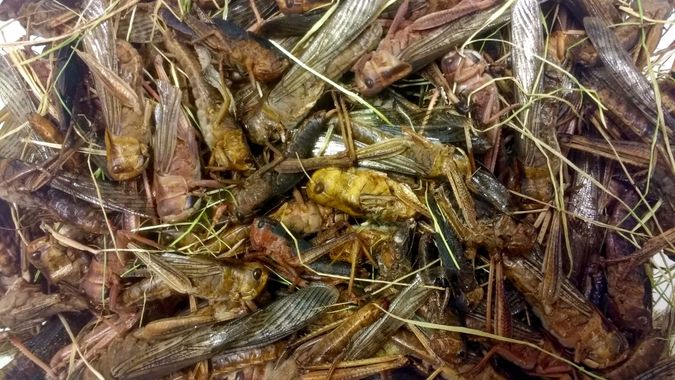 Wings of Desire? The author’s girlfriend wasn’t thrilled about the collection of locusts in her kitchen. Image by Ilan Ben Zion

Though taboo in the West, entomophagy — the eating of insects — is commonplace for an estimated 2 billion people worldwide, from Japan to Mexico and most places in between. Locusts are also mentioned in the Bible as being kosher for Jews to eat, with some communities maintaining the tradition of eating insects down through the 20th century. In a 2013 report, the United Nations’ Food and Agriculture Organization urged developed countries to rethink insect consumption, pointing out that insects produce less methane and other greenhouse gases than typical domesticated animals, are more efficient at converting feed into protein, consume considerably less water, don’t require as much land and are healthier than beef, poultry or pork.

One Israeli start-up is joining the growing ranks of companies seeking to develop viable ways to raise edible insects for an increasingly ravenous world.

Elifelet is an unlikely place for a food revolution. The quiet farming community of 614 people in the hills north of the Sea of Galilee seems a long way from Tel Aviv skyscrapers of Start-up Nation. But this moshav in northern Israel has the rare distinction of being home to Hargol FoodTech and the world’s largest commercial grasshopper farm. The company is forging ahead to expand production to meet burgeoning demand. 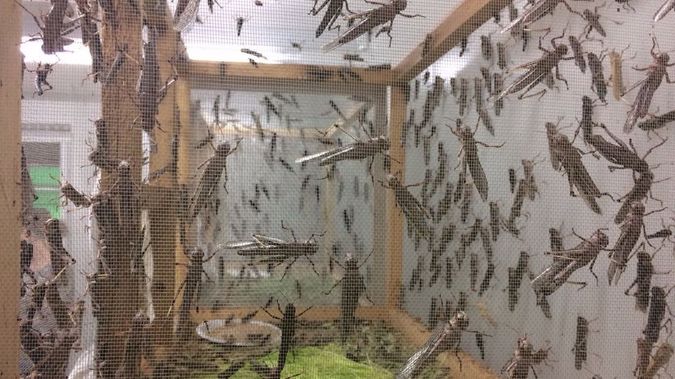 Bring on the Locusts: An Israeli start-up is seeking to develop viable ways to raise edible insects for an increasingly ravenous world. Image by Courtesy of Hargol Food Tech

Construction workers were busy as bees on Sunday converting disused chicken coops into climate-controlled incubation and growth chambers for hundreds of thousands of Locusta migratoria — the African migratory locust. Once completed, the building will be capable of turning out 10 tons of edible locusts per year. Other adjoining sheds will undergo the same overhaul to ramp up output to meet Hargol’s target of producing millions of locusts annually.

Hargol has caught the attention of major food corporations worldwide and last month it took first prize in an Israeli startup award competition. It has drawn investors from Israel and abroad and aims to have a fully operational industrial farm up and running by mid 2018. 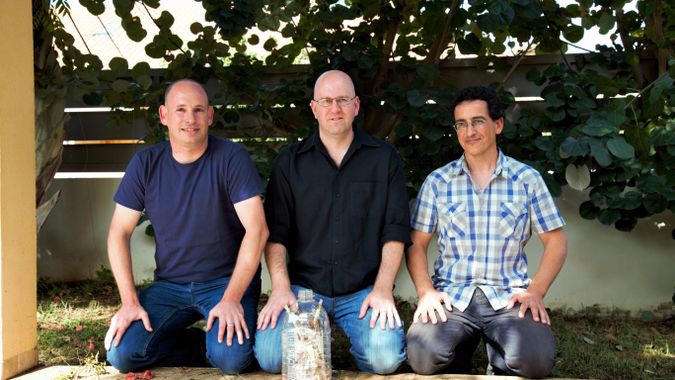 “Demand for protein is continuously rising, and the existing sources of protein are either unhealthy for people or the planet, or both,” said Dror Tamir, Hargol’s jocular CEO, when we met at the company’s facility in Elifelet. “We’re following a basic principle: The smaller the animal, the more efficient.”

Tamir speaks cryptically about Hargol’s closely guarded innovations that have enabled the company to reduce egg incubation time from 10 months to two weeks. A gentle munching pervades the humid white-walled chamber where cage upon cage of locusts are stacked. Each cage contains hundreds of the insects in different stages of development. The optimal conditions inside the farm enable locusts, which are fed on a diet of organic hydroponic wheatgrass, to mature from egg to harvestable adult in just six weeks — abreakthrough that makes mass production commercially feasible. 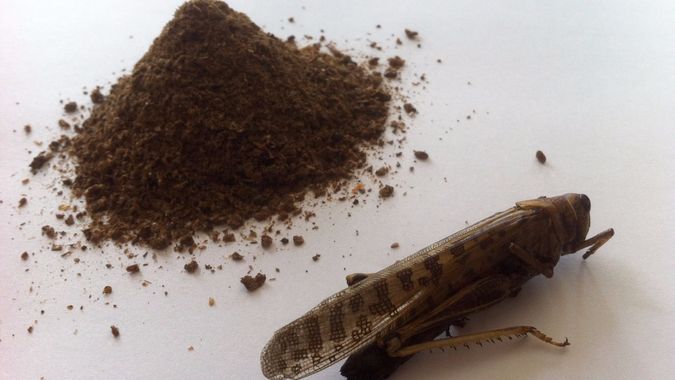 Gourmet Grasshopper: From pest to protein powder. Image by Courtesy of Hargol FoodTech

Once mature and ready to harvest, the locusts are frozen. The cold kills the invertebrates painlessly. The company will market both whole locusts, which Tamir says will be roughly a third of Hargol’s output, and neutral protein powder for food manufacturers. Hargol’s prospective customers have already put in pre-orders for hundreds of tons of whole grasshoppers for insect snacks, as well as “energy bars, sports shakes, pasta sauces, cookies and chips. You name it,” Tamir said. “They’re just waiting for us to supply them in bulk.” The company expects to ship the first bulk orders in the first quarter of 2018.

While the idea of corn chips made with grasshopper powder may not immediately sound like the most appealing snack, it could hypothetically still be kosher and halal. Leviticus 11 lists certain species of grasshopper that are permissible for Jews to eat. In the New Testament, the Book of Mark recalls that John the Baptist ate “locusts and wild honey” in the wilderness. They are also considered halal, and Muslims across the Arab world consume jarad, the Arabic term for locusts, wherever they appear.

For centuries, Jews of Morocco, Algeria and Yemen maintained the tradition of feasting on the desert locust — Schistocerca gregaria — while the Jews of Europe ceased consuming them, explained Zohar Amar, a professor at Bar-Ilan University, whose specialty includes identifying flora and fauna from the Bible.

“From a Halachic perspective, [locusts] have the same standing as fish,” he said. They do not require kosher slaughter and are considered pareve — neither meat nor milk. Amar notes that while Yemenite Jews such as himself unequivocally deem desert locusts kosher, the tradition concerning migratory locusts — like those raised by Hargol — is more ambiguous.

The tradition of eating locusts is dying out, partly because locust swarms reach Israel less frequently thanks to international efforts, and partly because Israeli Jews have embraced Western cultural food norms.

“The cultural problem is more troublesome, because today Western culture dominates us,” Amar said, and that has impressed taboos about eating insects onto Israeli culture. “Even if I have a tradition from my grandfather and my grandson sees it, he knows it’s not acceptable in society.” Much of his research, Amar said, is for the sake of preserving that tradition for future generations.

For a fair skinned Jew uninitiated into such traditions, cooking locust was an adventure meal that required some psyching up. Before boiling them for 20 minutes, there’s the grisly task of removing wings and legs. The critters undergo a lobster-like transformation in their hot bath, emerging reddish. Once dried, they are fried. They emerge crispy and then get tossed with salt and spices. They are then consumed, carapace and all.

Though such a snack could easily take off as the newest trendy bite in a city like Tel Aviv, Hargol’s founders have set their sights on exporting to American and European markets. But even if those populations remain squeamish about eating insects, Tamir is not too worried: “If not the U.S. and Europe, then there’s always Japan, Indonesia, Thailand, Tanzania, Mexico and many other places.”

“We’re at the very tip of the iceberg,” said Tamir. “We’re just trying right now to dramatically expand production to meet demand for the basic products.”

Ilan Ben Zion is a freelance writer based in Israel. He is a reporter at the Associated Press and a news editor at The Times of Israel.