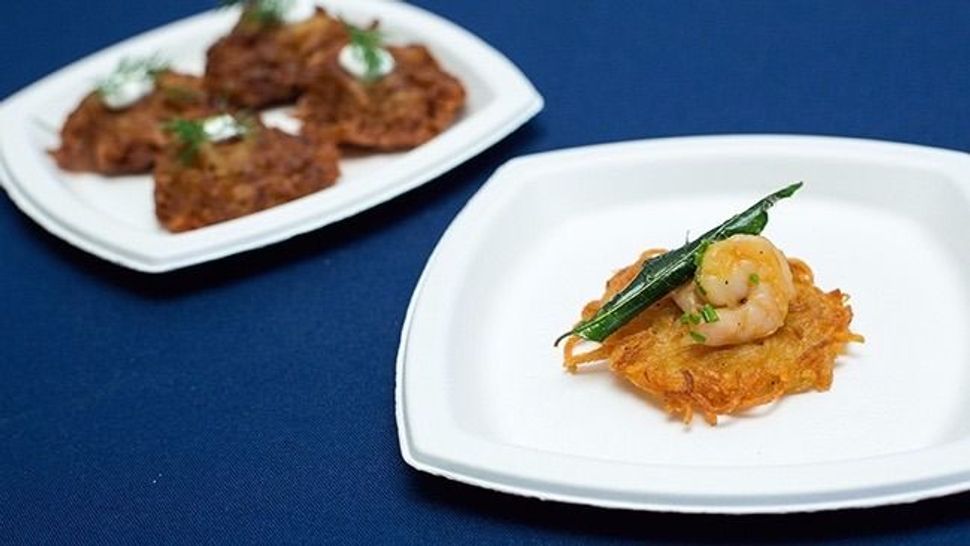 There was a lot of talk about grandmothers at the 9th Annual Latke Festival, held during Hannukah at the Brooklyn Museum: their recipes, their knuckles, their advice and their place at the hot stove.

But no admitted Jewish grandmothers were on hand at the festival to insist on proper latkes. So what makes a latke a latke — and what makes it Jewish? The festival offered a world of possibilities while anointing two winners in its latke-making competition, one that expanded on the addition of traditional Central European ingredients while the other reflected global influences.

The festival encouraged creativity. The only guideline for the 20-plus latke makers, who were mainly chefs from New York City restaurants, was that they provide tasting-size portions. Otherwise, there were no rules.

“The latke belongs to the world now,” said Neumark. It seems that creating a potato pancake that was crispy on the outside; soft on the inside was enough to qualify. But expanding the brand clearly didn’t mean watering it down.

Chief Maria Zizak, of Brooklyn’s Korzo, came close to a grandma approach before veering off into a degree of creativity. “It has to have potatoes and eggs and very little flour,” she said. “We also put in raw apple slices and raisins. We are from North Country Slovakia..The raisins give it a sweet caramelized taste.”

Dmytro Martseniuk, executive chef at Veselka in Manhattan, also started with a standard preparation. “I’m from Ukraine,” he said. “I’m using ground onion, potato, eggs, flour, salt and pepper.” Then he added mushrooms to the mix. “In Ukraine it’s one of the best dishes,” he said of the potato pancake. “We sell thousands of them at Veselka. We make them non-stop.”

Scott Natale, executive chef at Burger & Lobster in Manhattan, said, “I go strictly traditional, with potato and matzo meal. This is what my grandmother always made: matzo meal, egg, potato, grated onion… pretty simple. I seasoned it like an everything bagel. I added some sesame, some poppy seeds and roasted garlic.”

“Being in New York City we try to make it different with raw shrimp, curry leaf, and a curry base,” said Garden Court Café chef Tsering Nyima. “And I make the sauce with lobster broth.” 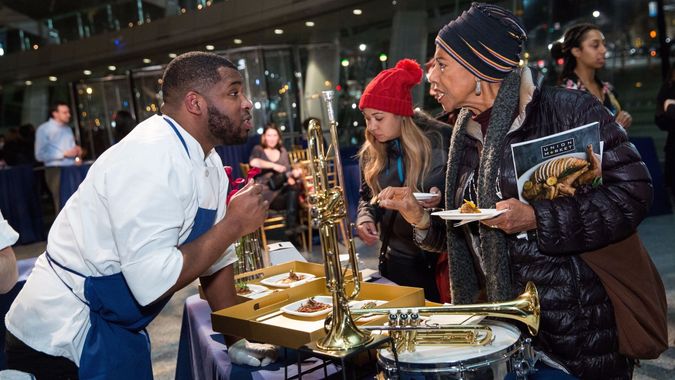 Dizzy’s Club chef Corey Samuel added smoked duck to his latke and fried it in duck fat. Image by Courtesy of Latke Festival

Chef Corey Samuel of Dizzy’s Club at Jazz at Lincoln Center in Manhattan said he “wanted to take some things from my South Carolina heritage. I eat a lot of duck. We smoke a lot of duck. I cured the duck for three days for the festival. I smoked it for four or five hours.” One of his secrets: Cook the latkes in duck fat.

Saul Bolton, executive chef at The Norm at the Brooklyn Museum, also went with duck: “Smoked duck breast and some Katchkie Farm rhubarb, tinted with hibiscus and with a little bit of ginger so the red comes from the hibiscus and not from hot-house rhubarb,” he said.

Talking about the evening’s ingredient mashups, Ilene Rosen of R&D Foods in Brooklyn mused, “What makes it Jewish? I don’t have an exact answer for that. Our inspiration is the food we make on a daily basis. I think about potatoes as a root and go from there — and trying to make something vegetarian that isn’t tricked up with duck, coffee or salmon, something traditional.” She showed off her latke: “In this we have beet, onion, horseradish and carrot,” she said.

“I believe just fried potato,” said Cabot chef Jimmy Kennedy, who grew up in northeast Mississippi. He notes that latkes are “so pervasive in New York City culture. There are so many fine Jewish Eastern European traditions here.”

His offering at the festival? “It’s actually very Mexican. The wheat cuitlacoche — in Iowa it’s called corn smut. We actually threw it away. But traveling in Central America I realized it was a very specific ingredient, considered a delicacy. They had it in very fine restaurants and I fell in love with it and I’ve been putting it on my scrambled eggs and everything else you can think of ever since.”

The festival judges said they enjoyed the tinkering, but tended toward the traditional.

Naama Shefi, executive director of the Jewish Food Society extolled tradition. “Latkes are ideally from potato, with very few extras: very crispy from the outside; very moist from the inside,” she said.

She also talked about the festival’s aroma. “There is a smell. I just walked in tonight and there’s a Jewish smell. It often time comes from fried onion. Hence my latke would have onion.”

Another judge, Peter Kim, executive director of the Museum of Food and Drink, said, “I’m a latke purist. For me it’s all about the earthy potato flavor, the crisp golden texture on the outside. I like a little crispy edged. I like to be able to feel the shreds and not for it to be a pulpy mix of potatoes. For me that’s the heart and soul and the backbone of the latke.”

Ralph Gardner, author and journalist, said, “The potato is key. You can embellish it with all kinds of stuff but if the potato is not done to perfection you’re in trouble. Also I believe that latkes that have lox on them are great because you can’t go wrong with smoked salmon.”

The judges, for all their talk about tradition, chose for first place a plantain, sweet potato and tortilla latke with ancho-braised chicken, pickled onion and crema. From Brooklyn’s Benchmark Restaurant, it was yummy enough for grandma, but I doubt she’d call that a latke.

The festival attendees seemed to echo the sentiments of the judges I talked to. Their choice — The People’s Choice Award — went to Peter Shelsky of Shelsky’s of Brooklyn. His “Latke Reuben” was a caraway-seed-studded latke stuffed with Riesling-braised sauerkraut and Swiss cheese, topped with Russian dressing and corned beef — all ingredients recognizable to grandmas from Eastern Europe, even if they might not call the assemblage a latke.

What ultimately defines a latke as Jewish is its connection to Hanukkah. The holiday should not become an afterthought to the latke, of course. But, said Neumark, “There’s so little around Hanukkah. It’s the latke that takes the stage, and that is so cool.” The take-away from all the glorious culinary experimentation of the latke? For some of us, it’s to eat them all year round.

Rachel Ellner is a food and cultural affairs reporter. Her last story for The Forward was on the meal four top Israeli chefs would prepare for the Jewish Wonder Woman, Gal Gadot.