How The Non-Jewish Begyl Became The Jewish Bagel 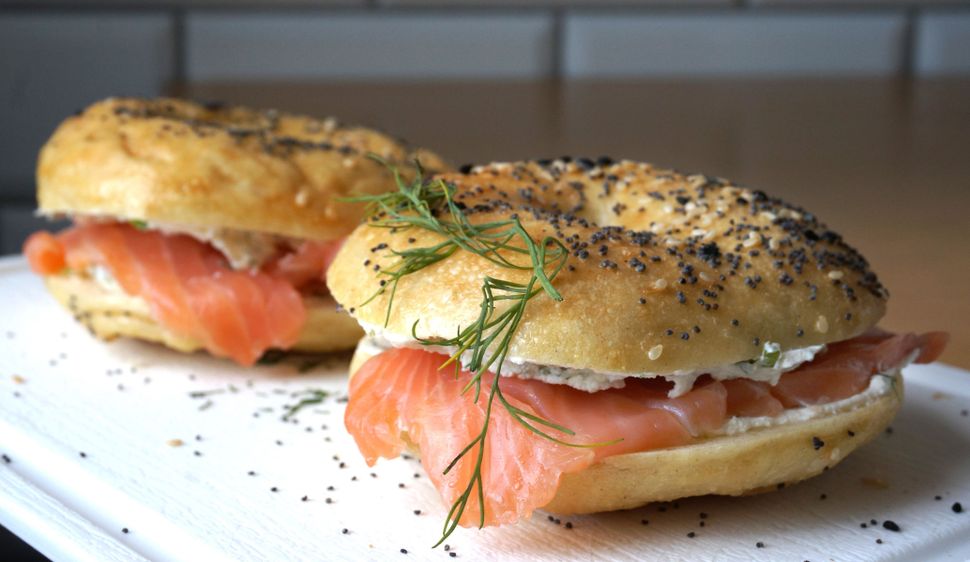 There’s no arguing with the tight grip the Jews have over the bagel.

Like gefilte fish and matzo, the bagel seems uniquely Jewish in origin, indigenous to the European Jews who first enjoyed it.

But imagine my astonishment when I found out this wasn’t the case.

According to WhatscookingAmerica, bagel (BAY-guhl) – Bagel derives from the Yiddish word beygl, which comes from the German word beugel, meaning a “bow” or “bracelet,” because of the shape of the bagel. Bagels are bread rolls in the shape of a doughnut or an old-fashioned curtain ring. The brown crust is obtained on the rolls by first boiling them in water and then baking them in an oven.

Bagels were peasant food, tough and chewy during a time when soft, delicate bread was what wealthy people ate. It took a scarce few hours before these bagels went utterly stale. Its fleeting shelf life and the complicated mechanism by which it cooks, made these bagel utterly un-American in nature. American food is easy to make and long-lasting. Bagels…are not.

So what makes a bagel a bagel and not a piece of toast?

Could it be the distinctive ring shape? Personally, anything circular and remotely carb-y is something I interpret as a bagel, whether it’s been boiled, pre-baking or not. In the olden days of Eastern European marketplaces, bagels were sold by peddlers, who engineered them so they could be hung on a string and sold one by one, without fear of them falling to the ground and becoming unsalable.

In Eastern Europe, the bagel had many close relatives, like the Polish obwarzanek krakowski, the Ukrainian bublik, the Lithuanian riestainiai, and the Belorusian bublik.

Head into the back of any bakery, and you’ll find a massive kettle filled with bubbling water and malt. The bagels are dropped into the kettle. In the heat of that constant boil, the dormant yeast is reactivated. Give or take about 90 seconds, and the bagel begins to float in the water. Remove it and you’ve got a shiny, chewy masterpiece.

How did the cream cheese and lox combination arise?

Gil Marks, Jewish food historian, noted that during the 1930’s, many Jews refrained from eating the Sunday brunch classic of eggs benedict, which contained ham, and instead substituted lox slices for the ham, some schmear for the hollondaise, and a bagel for the English muffin. Thus a Jewish-American classic was born, out of the very Jewish desire to both assimilate and not assimilate.

Visually, lox is the bagel topping that most resembles meat, being bright red, cut in long slices and not falling apart when impaled by a fork. Visually, bagels served with lox and cream cheese gave the impression of being treif, or unkosher, looking to the world like the equivalent of a cheeseburger, mixing milk and meat. It was ‘safe treyf.’

Bagels were the quintessential secular Jewish food; unlike other traditional Jewish foods like brisket, eaten on holidays, or matzo, reserved for Passover, the bagel was meant to be eaten on weekdays, with no special designation. To enjoy a bagel and relate it to one’s cultural identity was to embrace cultural Judaism without feeling the need to engage with the religion.

American Jews are, for the most part, irreligious. Their culture is an inheritance of their ancestors. Ashkenazi traditions come from Europe. The Jewish-American bagel, born of the ghetto but created into something entirely new by homesick immigrants, may be the only culinary tradition that is entirely Jewish-American. In fact, when Deborah Romanek analyzed the larger meaning of three Jewish baked goods, matzo, challah and bagels, in the context of Diaspora communities, she found that the least religious participants in the study “ate bagels more than the two other types of bread. For them, bagels, or ‘beigels,’ were directly related to their identity as Jews,” while more observant Jews were less attached and sometimes even uncomfortable with bagels.

Bagels are almost always store-bought versus homemade, eaten communally versus eaten solo (note its arrival as a breakfast food and family meal for Jews on Sunday mornings). In a time when Jewish food was seen as shameful, the store-bought pedigree of the bagel helped shield it from obscurity, unlike other home-style Jewish foods (like schmaltz or gribbenes).

In fact, many of the original immigrant Jews responsible for the bagel’s crossover success from Europe to America would be shocked at the way its been repurposed as an iconic Jewish food. The dynamics of immigration are such that when immigrants come to a new country, ready to assimilate, there is an equally strong desire to maintain their distinctiveness and demonstrate commonality as a group in order to retain their identity. And thus identity markers are created, often in the form of iconic foods. When national languages are abandoned (see many anthropological discussions on the death of Yiddish), iconic foods are relied upon instead. Thus the bagel was repurposed as a Jewish icon, for Jews concerned about losing their heritage, about losing themselves, to have something to cling to in a new country.

As Joan Nathan wrote, “When my family first moved to Larchmont, N.Y., in 1946, my father had a feeling that the neighbors living behind us were Jewish. In those days, you didn’t broadcast your religion, so he devised a plan that would reveal their cultural background. We would go to the [190]Bronx and bring back some bagels. If our neighbors knew what the rolls were, they were Jewish. If they stared at them in bewilderment, we would know they were not.” Bagels were the code by which to determine if you were among your own people or among strangers.

You are what you eat, goes the saying, and it applies to bagels just as well. In his TIME article, Josh Ozersky wrote that “The bagel is a symbol of assimilation at any cost.”

So as Yiddish declined, the bagel rose. In this round piece of boiled-and-baked dough, lies the story of how ordinary people fought to retain a grasp on their identity. It is the story of the modern Jewish experience making room for the past Jewish experience. It is change, it is sentiment, it is big on culture and short on religion, it is immigrant food, it is the poor man’s dish, it is of New York, it is American, it is Jewish.

With much thanks to Shaul Stampfer (The Hebrew University) for allowing me to read his research on ‘Bagel and Falafel: Two Iconic Jewish Foods and One Modern Jewish Identity’.

How The Non-Jewish Begyl Became The Jewish Bagel