How Did The Pickle Become A Jewish Food Staple? 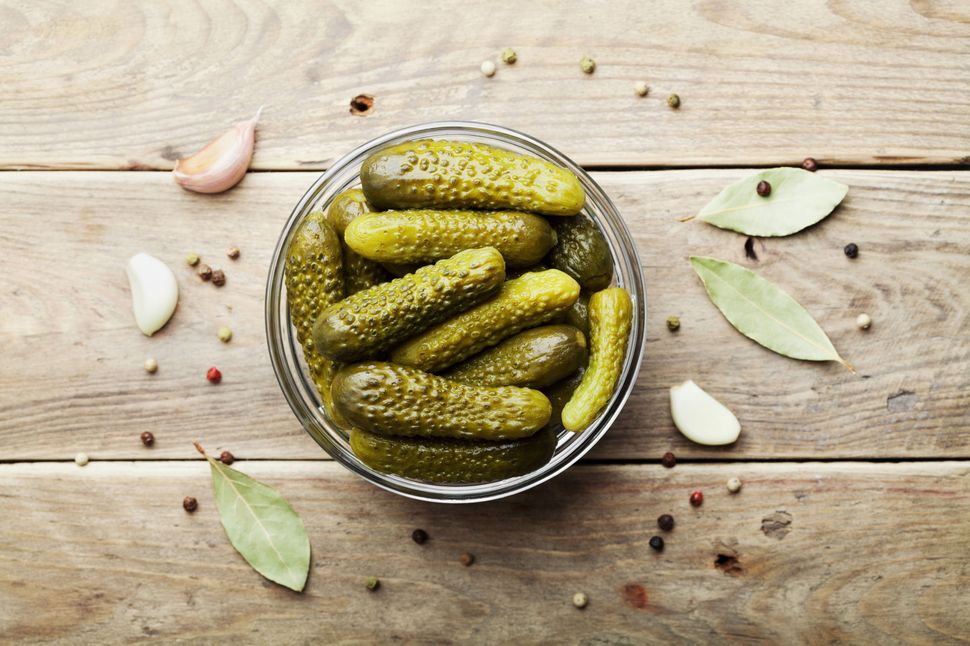 The pickle! That fermented flavor, that solidly sour mouthfeel, that palate-cleansing post hotdog taste. The bright green, with its violent crunch! How we Jews love our pickles! But how did this love affair begin?

Immediately I think of a time when Jewish pickle vendors hawked their wares on the streets of the Lower East Side. Only true history buffs will remember the pickle wars, where vendors competed for a monopoly on the pickle. These bold Jewish immigrants made the pickle synonymous with Jewish food, but to find out who loved the pickle first, we have to go back further than that. (This pickle history timeline reveals that pickles have been around for literally hundreds of years, but we aren’t going back quite that far.)

It’s an Ashkenormative love story that begins in Eastern Europe. The Jewish ghettos were unsanitary. The winters were long. Fresh food was scarce. Eating well was expensive. There was only one solution.

It all started with pickling, that most Eastern European of habits. To get through the long and grueling winter months, food had to be pickled. Everything could be pickled, from lemons to carrots, with varying degrees of culinary success.

Some took the cucumber, a cheap, accessible vegetable, preserved it in the spring to make them last through the winter and feasted on it throughout the year. Some of those people were Jews and thus the Jewish love affair with pickling began, as a way of keeping vegetables hygienic and healthy.

Pickles aren’t necessarily a Jewish tradition. In fact, who can really account for the popularity of the pickle throughout non-Jewish Eastern Europe? A love for preservation wasn’t unique to Jews, but just as they did with bagels, Jews took the culinary tradition of pickling to America and made it their own. These early Jewish immigrants made the pickle popular when they came to America from Eastern Europe.

What makes a kosher pickle kosher? Those trend-setting Jewish pickle makers of New York City used garlic and dill in salt brine, no vinegar necessary. Kosher pickles were pickles that were approved by the Jewish Orthodox Congregations of America, but the word ‘kosher’ is now used to describe any garlic-flavored pickle.

Jewish pickles are Jewish when they’re fermented in brine. Brine was the way to keep vegetables alive for far longer than their shelf life allowed. Without the invention of refrigerators (which many Jews were too impoverished to afford), people had to innovate to make their vegetables last some other way. The Jews certainly didn’t invent pickling, but they did take pickling with them from Russia to warmer, more moderate climates.

And why pickles? Pickles have always been a common deli food, and Ashkenazi Jews, with their affinity for pickles and delis, began to place pickles in kosher delis. Jews used the pickle as a palate cleanser in their delis because the acidity of the pickle juxtaposed against the taste of the sandwich allowed customers to fully experience their food. The idea spread to delis across the nation and now it’s the de facto sandwich side dish.

So what’s the big takeaway?

Cleopatra claimed that eating pickles made her beautiful. So us Jews who eat pickles so voraciously and so often ought to be exceptionally good-looking.

Shira Feder is a writer for the Forward and she loves a good pickle. Talk to her at feder@forward.com or @shirafeder

How Did The Pickle Become A Jewish Food Staple?