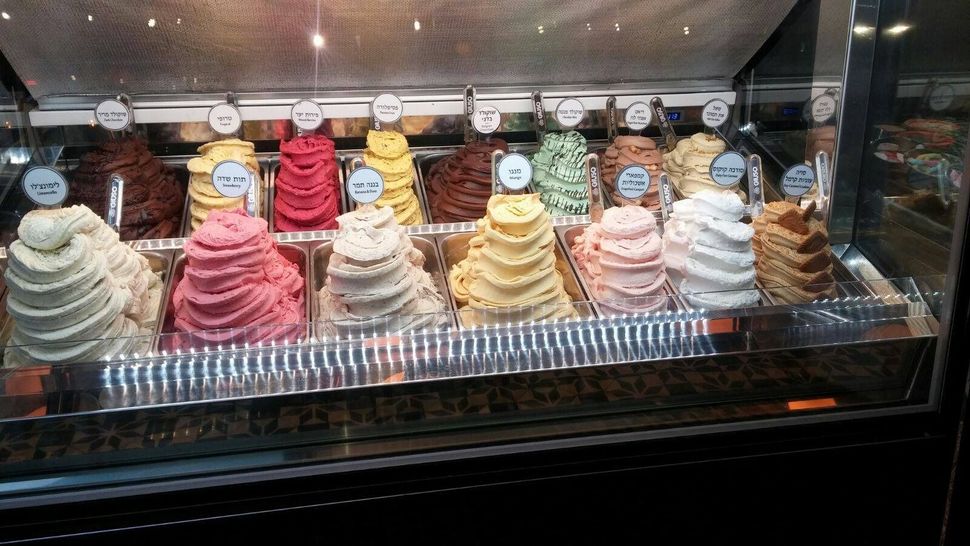 My 21-year old kibbutznik niece values ice cream above rubies. When it comes to ice cream, she is a purist. No add ins. No whipped cream. No toppings. Just the ice cream. In her opinion, ice cream is always worth the money and the calories. When she tipped me off to the “best” ice cream in Tel Aviv, I had to try it for myself.

So my husband Mark and I took a three-mile ice cream walking tour of Tel Aviv.

We started our tiyul (tour) at Anita La Mama del Gelato in Neve Tzedek. The attendant patiently plied me with samples until I settled on a refreshing watermelon mint sorbet (over tempting alternatives including: Cappucino & Lotus Cream, Kinder Bueno, Chocolate Almonds & Caramel, Hazelnut Mousse & Crunch Chocolate). In case you need additional cooling, Anita’s Yogurt soft freeze with multiple add-ins is just half a block away.

On the White City’s Rothschild Boulevard, we steeled ourselves past other ice cream shops — including Max Brenner and Leggenda — to stay the course for the twenty-minute walk north to the Levantin neighborhood for Golda Glida (address: Mikveh Israel 22). Golda is a thirty branch franchise all over Israel using the same product as Anita, the Italian Giuso. Not surprisingly the tubs were filled with flavors we had seen at Anita. I particularly enjoyed refreshing Pear & Wine and the Arak & Grapefruit, which we had not seen before.

Then we headed further north another twenty minutes to the award-winning Buza (Arabic for ‘ice cream’). Kibbutz-born Adam Ziv and Alaa Sweitat, the owner of the local Aluma restaurant, partnered to create an ice cream shop in the north of Israel hoping to bring together people of all backgrounds and religions. (Buza became the first Israeli business to win the United Nation’s Flourish Prize for Coexistence in 2017.) After his army service, Ziv traveled around the world looking for the best ice cream and interned in ice cream-making in Italy and the Canary Islands. The company’s first location opened in 2012 in the Jewish Arab town of Ma’alot-Tarshiha near the farmers’ market in order to access local, fresh flavors and natural ingredients. Now the factory is located at Adam’s nearby kibbutz, Sasa, and Tel Aviv now boasts two Buza locations, furthering the vision of peace and justice through ice cream. As Adam said in an interview at Aim2Flourish, “The fact that when you do something together and you have the same interest it becomes really easy to communicate and get along.” Menus in Arabic and Hebrew, along with employees of all backgrounds, help further that goal. As spirulina ice cream flowed in the kitchen, I had to make a tough choice between halva and a chocolate cone. In the end, I chose a chocolate and pistachio double scoop out of a chocolate cone.

You won’t regret the calories.

Rabbi Deborah R. Prinz lectures about chocolate and Judaism around the world based on stories from her book, “On the Chocolate Trail: A Delicious Adventure Connecting Jews, Religions, History, Travel, Rituals and Recipes to the Magic of Cacao” (second edition, Jewish Lights) . She co-curated the exhibit “Semi[te] Sweet: On Jews and Chocolate” for Temple Emanu-El’s Herbert and Eileen Bernard Museum, New York City, now available to travel to your community.