Which Ultra-Orthodox Jews Are Paying 23K To Go To Antarctica? 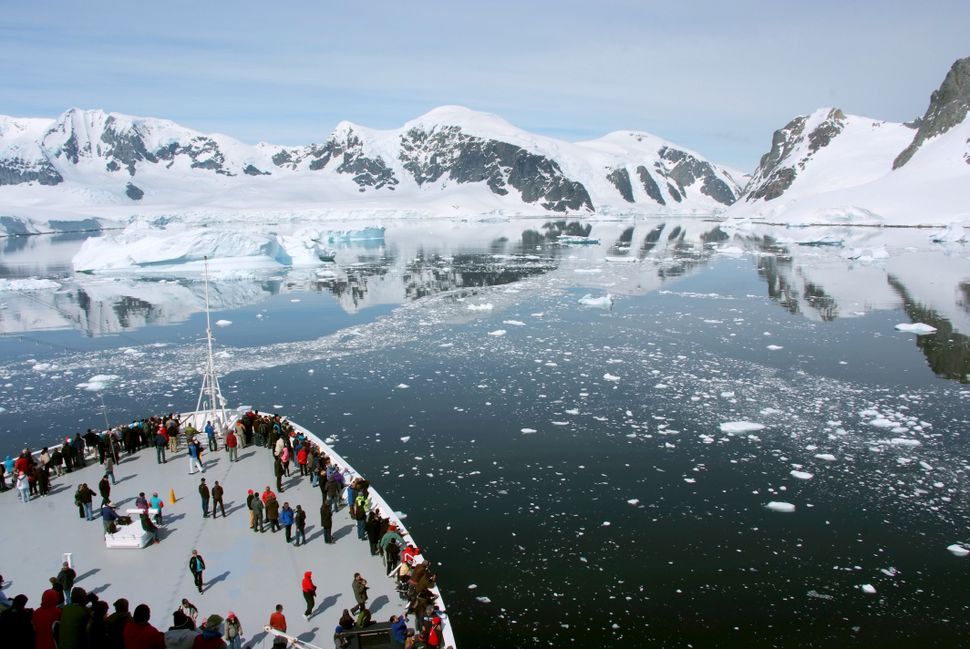 When you keep kosher, your travel options are limited. Either you pack suitcases of food that customs may or may not confiscate at the airport, or you resign yourself to traveling with a three mile radius of certain kosher restaurants or grocery stores.

You certainly can’t jump on a ship bound for Antarctica, that magnificent isolated landmass of ice, snow and biting winds where few humans have survived without supplies from off the continent.

This December, Kosher Antarctica is offering a glatt tour of the seventh continent, catered by Montreal’s L’Orchidée Traiteur. With three indulgent kosher meals a day, this trip will cost you a pretty penny. The cheapest option will run about $12,995 per person, while the more lavish ‘One Ocean Suite’ will cost $23,495 per person.

Which well heeled, adventurous Orthodox Jews will take this journey to the final frontier on the RCGS Resolute?

I decided to investigate.

By trade, Daniel Eleff, of Dan’s Deals, is a points guy. He counts and calibrates the care and keeping of credit card points. So planning a trip to the end of the world might seem to be like a step away from the norm for him, but it’s something Eleff has been building towards for years. He’s flown all around the world on points, to all six continents. Antarctica is uncharted territory to Eleff. “This is one trip you can’t just call United and book,” he told me.

The trip begins at Ushuaia, Argentina, in the Southernmost commercial airport on Earth. It’s an adventure any ambitious traveler longs to go on but the price might seem prohibitive for most. “When we first started planning the trip, we were thinking, is anyone going to want to pay between $13,000 and $26,000 to go to Antarctica? But I keep hearing that it’s a bucket list item, that it’s a once in a lifetime trip, that people want to splurge,” Eleff told me. “It’s never been so easy to go to Antarctica while keeping kosher before.”

There’s going to be a Sefer Torah on board. It’s insured, like essentially everything on the deck of the RCGS Resolute. Getting an emergency plane down to Antarctica without insurance would cost hundreds of thousands of dollars.

The Resolute can accommodate about fifty people. That’s quite a bit smaller than your average cruise, but the logistics and the price of this journey tend to screen out many potential customers. But the crowd is still looking diverse, by Orthodox standards. “I’m a Chabadnik and my partner’s a Satmer,” Eleff told me. “So we’re getting a nice, eclectic crowd signing up.”

And the religious complications? Well, rabbinic law forbids religious Jews from boarding a ship on Wednesday, Thursday or Friday for fear that it would take too long for the Jews to acclimate to the ship and ruin Shabbat. This isn’t a hard and fast law, but getting to Antarctica means crossing the often choppy Drake Passage, so Eleff chose to adhere to it when planning the trip.

Another complication was figuring out when Shabbat was over. Eleff had to consult a rabbi about this one. Ordinarily, Shabbat is over when you can see three stars in the night sky. But it never gets dark in Antarctica, so Shabbat will ends at 1:09 AM, a rabbi ruled.

The timing of the trip means a fast day will fall, and because of the geographic location of the boat, the fast will end up being a full 24-hour one. It takes two days to cruise around Antarctic, and another two days to get back to Argentina. Eleff and his fellow planners timed the trip so they would fast on the way back to Argentina.

On the Dan’s Deals forum, Jews were concerned about the lack of wifi, minyan options and the complications of lighting candles for Chanukah.

But even so, the trip is a go.

“So far, about a dozen people have booked,” Eleff told me. “We’ve met our goal. It’s definitely going to happen.”

Which Ultra-Orthodox Jews Are Paying 23K To Go To Antarctica?