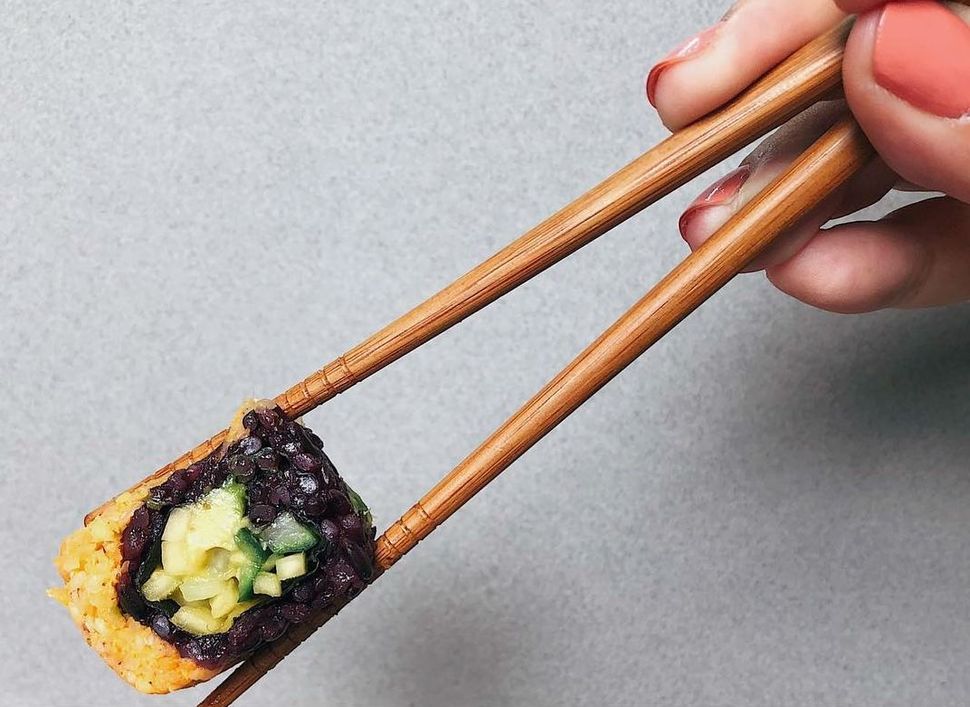 He’s going from Hell’s Kitchen to the Shark Tank.

Guy Vaknin, whose kosher-vegan Beyond Sushi chainlet has become a Big Apple phenomenon, will make his debut on ABC-TV’s Shark Tank this Sunday.

The Israeli-born Vaknin, who made it to the Hell’s Kitchen finals in 2012, will face the “Sharks” — a panel of tough tycoons — with a national expansion plan for his brand, which has grown from a single East Village counter for six New York eateries. According to ABC, Shark Tank winners have raised more than $100 million from judges, who open their own pockets to fund standout ideas.

But Vaknin told the Forward money’s just part of the appeal. “Sure, getting interest from big investors is key, going on the tank and showing the nation that plant-based food is the future,” he said. “But to get that stamp on national TV was the drive. In this day and age, you have to be out there, and this is a great way to get our name out.”

Vaknin’s dip in the Tank didn’t happen overnight. “My wife [and business partner, Tali Vaknin] has been trying to get me on the show for years,” he said. “I said no. But this year, I said, ‘Let’s do it’. She did all the paperwork, and it didn’t happen. Then someone connected to the show said, ‘Hey, I heard about you, and I want you to get on’.”

While Vaknin’s sworn to secrecy around his “Tank” pitch, he did reveal that “the general idea is to grow business into a national brand. I think it could be the leading plant-based brand in the country,” he said. “The main focus is restaurants, but it’s also possible we’ll do wholesale and products that relate to our mission.” Beyond Sushi now employs more than a hundred people, Vaknin said; another location’s set to open in Manhattan this year, with at least three more set for 2019.

A reality-TV veteran, Vaknin insisted he wasn’t nervous during the June taping. “It was very exciting to be in front of them after seeing them all these years,” he said. “It’s hard to get me nervous at this point. What surprised me was how cold-blooded I was.” With promos now running for the episodes, Vaknin caught a glimpse of himself on the small screen this week. His assessment? “I’m a little older and a little fatter than last time,” he laughed.

And does his Jewish family, whose catering business provided Vaknin’s first cooking experience, kvell when he’s on TV?

“Everybody’s rooting and supporting,” he said. “But to tell you the truth, since I got on this journey with the business, my circle of friends has shrunk to the people most important to me. I don’t have a lot of time to hang out. When I’m not working, I’m spending time with my wife, my kids, and my family. That small circle keeps me sane.”

The Forward asked for even a hint of the show’s outcome, but Vaknin wouldn’t give. “I wish I could tell you what happens,” he said. “But I can’t.”