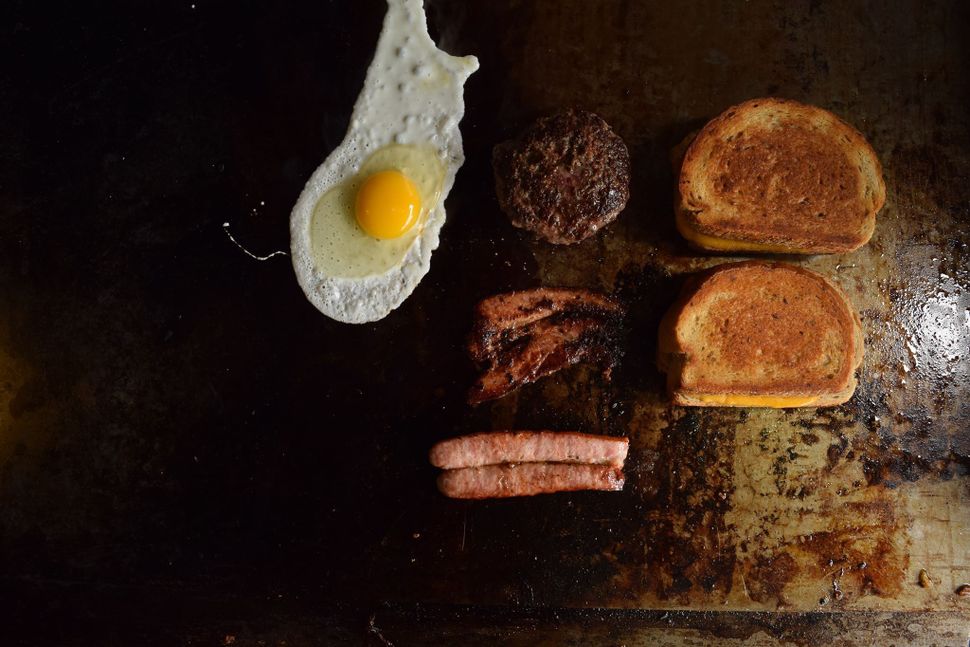 According to the dictionary, schmaltz can refer to melted chicken fat, or to excessive sentimentality; overly emotional behavior.

So how much schmaltz is too much schmaltz? Anthony Rose, a chef who swears by schmaltz, would know. Rose owns 5 successful restaurants, including diner-turned-deli Rose and Sons, as well as Middle Eastern-themed Fat Pasha, and a store called (what else?) Schmaltz.

Random House’s suggested title for what was to become “The Last Schmaltz” was “Let Anthony Rose Serve You.” Within 48 hours of their cookbook’s deadline, Rose’s writing partner Chris Johns called him up and said three words: the last schmaltz. That was that, and “The Last Schmaltz” now had a name.

Nostalgia plays a big role in Rose’s cooking, from trying to make kishke from scratch to experimenting with chicken fricassee. “It’s about figuring out what my parents ate,” said Rose. “You’d walk into the kitchen anytime and there’d be chicken gribenes cooking, and schmaltz on the counter, and hot challah, and chicken stock, and it’s very, very familiar.”

Rose didn’t expect to end up cooking Jewish food. “It started with a matzo ball soup there, a brisket there, and then getting into big crow with a bologna.”

Rose is very open about the illicit pleasures of enjoying bacon in his cookbook, and he thinks that Jews can enjoy bacon more than the average person because of the forbidden aspect. “As I’ve cooked more Jewish, I do eat a lot less bacon now,” he said, “but I have been known to stuff the menu with bacon.” Back at the Drake Hotel, where Rose began cooking, bacon was a culinary staple, and he believed it to be the perfect meat.

So why the last schmaltz, and not the last latke or the last bagel? “Well, we use schmaltz everywhere,” says Rose. “We deep fry it, pan fry it, light our Hanukkah candles with it…it’s definitely the new lard for me.”

If Rose has his way, it’ll be the new lard for everyone else too.