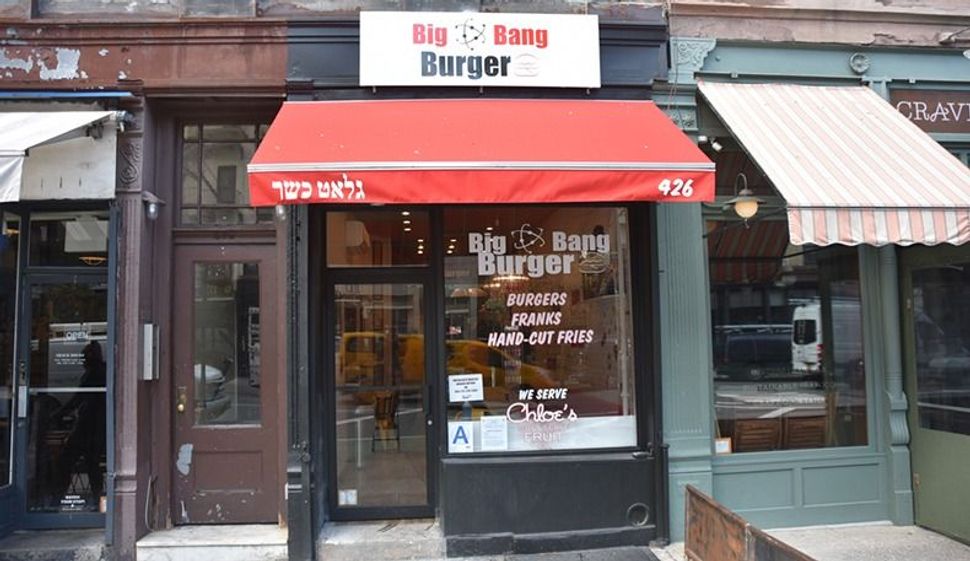 Everyone knows opening a restaurant is a tricky business. Only 21% of restaurant start-ups survive past 15 years, the average restaurant lifetime is 4.5 years, and 17% of restaurants fail within their first year of business. In the kosher community, all of those percentages are a whole lot higher.

“If someone gave me $10 million and told me to put it into a glatt kosher establishment on the Upper West Side or in penny stocks, I’d put it in penny stocks,” says Dr. Gabriel Ethan Feldman, the man behind the Upper West Side’s now-defunct Big Bang Burger. He’s a federal whistleblower who won $14.7 million in a Medicaid fraud case against New York City and decided to use his winnings ($4.9 million after taxes and lawyer fees) to open a restaurant.

Feldman was raised in a Conservative Jewish home. “One of the highlights of my week as a child was going to a kosher Chinese all-you-can-eat buffet and maybe that’s why I came to this later in life,” said Feldman. “One little fast food place isn’t going to make anyone’s life better or worse, but having a kosher restaurant in a community is just as important as the other things, like having a shul or singles nights.”

But creating a kosher restaurant Manhattan isn’t easy. In fact, as Dr. Feldman would tell you, it’s nearly impossible.

For all kosher restaurants, in or out of New York, there are restrictions in place. Kosher restaurants have to be closed on Saturdays due to Shabbat, which is primetime for most eateries, and they have to be closed for all the annual Jewish holidays. In fact, the only thing kosher restaurants can boast about is their captive market, kosher-keeping consumers that can’t eat anywhere else. But New York is its own animal, where “the price of rent and the kosher standards make it difficult to make a profit, even in Manhattan, where are there so many kosher-keeping Jews,” David Sax, author of Save The Deli, told the Forward.

The 750-foot space on 426 Amsterdam Ave, which did not have a bathroom, cost Feldman and his business partner, Jane Potter (a platonic friend he met on JDate) $13,000 a month. He paid over $60,000 a year for kosher inspections, which was “virtually like paying another rent,” said Feldman. “It’s dealing with another oversight organization that has, if not as much power as the city, then maybe more. You’re better off not getting involved with the glatt kosher meat industry.”

A decade ago, the Upper West Side was host to numerous protests against the gentrification of the neighborhood. “There are no more new mom and pop shops, and you can see that, based on the recent closings. Seasons, they were able to sell in all their stores, but not in Manhattan. Coffeeberry [a dairy kosher casual restaurant], very successful, very crowded. Disappears without a word,” says Feldman. “The future is convenience stores, drug stores and banks. And lots of alcohol.”

In 2018, Manhattan’s storefronts are notoriously empty, due to high rents, and even chain stores are starting to decline on Manhattan’s West Side.

According to Jeremiah Moss, author of “Vanishing New York,” “A neighborhood is an emotional ecosystem, and when it is destroyed by gentrification, it’s trauma.” To walk around New York, where Jews once congregated in droves at unique, family-owned kosher establishments, and to see them replaced by Sweetgreens and Starbucks, is to feel a city’s DNA being rewritten under your feet. “For a community that has such wealth, with a diverse and vibrant Jewish community, it’s sad that it can’t support a number of kosher restaurants,” said Feldman, who contacted some community websites as a final hail mary before accepting defeat, but found the reception cold.

“Got a great idea? Start a food truck, go downtown,” says Feldman. “But do not go to Manhattan. The profits are not there. There is literally no profit left after hashgacha [kosher supervision] and rent in manhattan.”

So what’s next for Feldman? He’s retreating back to his state job as a public health physician, while his business partner Jane Potter is looking for other jobs so she can stay in New York. In the meantime, Feldman is doing his best not to think about how New York failed the kosher community.