Jews Try Pork For The First Time, Despite Taboo. So How Did That Go? 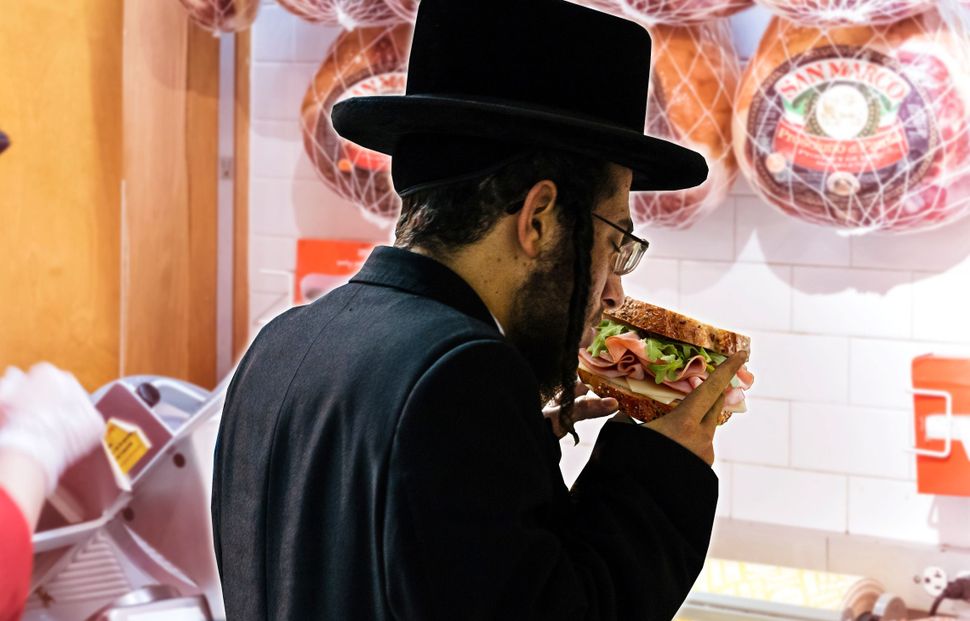 As every Jew knows, trying pork for the first time is a loaded experience, filled with guilt, shame and the fear of betraying your ancestors. Pork is seen as more non-kosher than any other non-kosher food, from octopus to lobster to caviar, so no matter what kind of Jew you are, and whether you eat it or you don’t, it’s a matter that requires consideration.

But these experiences — of overcoming taboos and guilt so often tied to tradition — are just as central to the Jewish story as biblically-mandated kashruth.

Here are some of the stories readers shared with me:

In the 60s I worked at a company that had a cafeteria and a cook. I forgot my lunch and I decided to eat whatever he had that day. He made pork chops. I went after them, my friend told me what that it wasn’t steak. it looked good and smelled great. So I had one it was good. And I am still here. – Carol Evans

I grew up in a Hasidic home in Boro Park, so of course I went to the local yeshiva, on the outskirts of Boro Park. At age 15, I was sure I didn’t want to remain religious. So one day I went to the bodega on the corner to get something to eat. I looked over the sandwich menu and decided to go for an egg and ham sandwich. Not having any other place to eat it, I took it back to the yeshiva and ate it there. No one suspected a thing. This was not only the first time I ate pork, it was the first time I ate something that was not kosher. I didn’t eat another unkosher thing until I was 23. -Sam, name changed to protect identity

For most of us it was in wonton soup. – Howard Singer

When I was 10 years old, I reached into the oven to pull out a tray of chicken wings my mom was roasting. As my head was literally in the oven, my mother yelled, “Slovah (my Yiddish name), if you ever eat pork you’ll smell your ancestors burning!” This moment in my childhood pretty much ruined me when it came to BLTs.

I’ve been a professional chef for more than three decades. I love to cook slow-roasted barbecued pork butt. I’ve had clients say they went home and dreamt about my BBQ pork. I put bacon all over the place. I even serve it as a dessert with my dark chocolate dipped crispy bacon. Folks think I’m pretty darn killer when it comes to cooking the meat of LA PIG, but I’ve never been able to get myself to eat it. No matter how good it looks and smells, I hear my mother’s voice every time I even consider putting it in my mouth.

I’ve had a lot of pals over the years that have asked me why I still can’t eat pork. It’s not like my Mom would know. My mother Harriet died in 1992. But I’ve discovered that the only thing louder than a Jewish mother is one who is no longer with us. – Chef Rossi 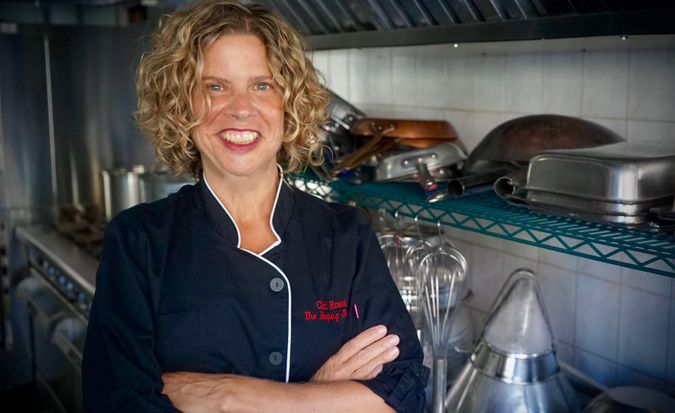 The first time, all I could taste was guilt. – Eva Kanovsky

It wasn’t pork, but ham, though I’d never eaten either. It was the fall of 1966, and I was fourteen years old. It was my first night away at boarding school. For dinner they served ham — the kind that comes in neat rectangular slices. I figured, ‘this is my new life, and I’d better get used to it.’ And besides, an upperclassman named Norman Steinberg who was sitting across from me was eating it blithely. So I took a piece and put it in my mouth. Not only had I never eaten ham before, but I’d never seen another Jew eat ham! I was a small-town kid; that’s how sheltered a life I guess I’d led. I never got as far as chewing it: it felt so slippery and utterly alien to me. So somehow I got it out of there, and I haven’t eaten it since (except, that is, when it’s very well-camouflaged in pea soup). – David Margolick

It was an Italian sausage and peppers sandwich. Loved it! But GUILT made me sick. – Marlene Adams

My great-uncle Irving drove up in his baby blue Cadillac. We were on our way to see “Quest for Fire” with Rae Dawn Chong. It was 1972 and I was ten years old. Two very important milestones happened that day. I fell in love with Rae Dawn Chong. I fell in love with bacon. Uncle Irv took us to a local diner before the show for a late lunch. I liked this Uncle a lot. He used to let me sit on his lap and I would steer the Cadillac while he pressed the gas and break. Here we were, a ten year old steering a boat of a car, no one wearing a seatbelt, Irv deep into his cigarette with the windows up. Ahhhhhh, the 70’s. Irv ordered the all-day breakfast, scrambled with white toast and crispy bacon. My family was Chinese Food kosher growing up. We never had bacon in the house. We couldn’t put cheese on our burgers. We could have Ribs and pork fried rice at the House of Chan. I had never had bacon before, but when my uncle Irv ordered it I knew this was forbidden fruit and I knew what to do next. No. I knew what had to be done next. “I’ll have the same,” I said. I never looked back. Rae Dawn Chong and I wed soon after. – Anthony Rose, owner of Rose and Sons

Not me, but my mother, who died not long ago, just before she turned 96 … she grew up in an Orthodox home and first tried pork at 21 years old. She said she thought lightning was literally going to strike her! – Karen Staller 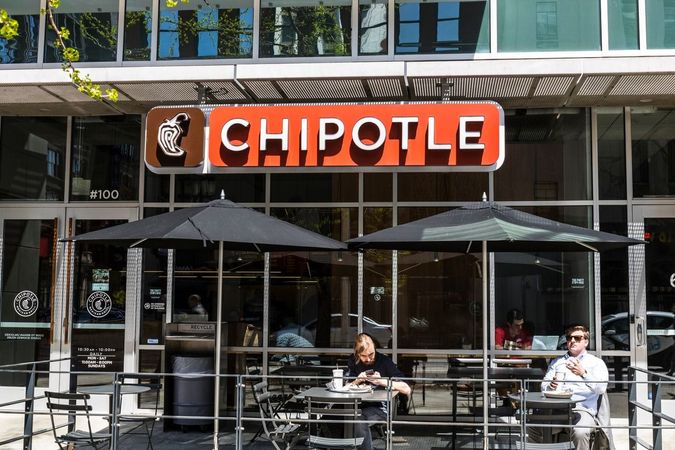 A Chipotle restaurant in Indianapolis. Image by iStock

The year is 2005. I’m enrolled in a college summer class after having just graduated from yeshiva high school. One day my friend Craig asks me if I want to get lunch together after class. I agree and go along with him to Chipotle. I’m still living at home with my parents and have never eaten any non-kosher food in my life. I’m a little worried someone will see and report me to my parents. Still, I forge ahead, welcoming my inevitable new life. Sure, I intentionally committed many sins before this. When I was 12 years old, I did things like secretly listen to the radio and flick the lights on and off when no one else was home on Shabbos or Yom Tov, just to wear down the fear of God in me. But this is different. The holy grail.

I walk into Chipotle dumbfounded. I stand staring at the large, overhead menu, reading it over and over and over. I tell Craig I have never eaten from Chipotle before and I have no idea what to get. Surprised at my admission, Craig suggests we split his usual order and I agree without asking any questions.

We sit down to eat and I’m really enjoying this burrito. The meat is beyond anything I’ve ever tasted before. It’s real supple. After a few bites, I start to get weirded out by this new meat texture that I have never experienced before.

“It’s really good. I never ate pork before,” I say and continue to enjoy my meal.

I laugh and say, “Hey, I told you I was an atheist and you’re an atheist too. Don’t worry about it! Everything is fine! This tastes great!”

I have to reassure Craig over and over that he did nothing wrong.

Over the next few weeks, Craig introduces me to more places such as Subway, which I don’t fancy as much. At first, I’m unable to finish a whole Chipotle burrito or a entire footlong Subway sandwich on my own in one sitting. I also feel like someone is watching and will inform my parents. After some perseverance, I fully assimilate. – Jonathan Friedman

A friend tells a story about someone he knew who was Jewish, dating a non-Jewish girl. After some months, he wanted to introduce her to his family so she invited them for dinner. When they sat down, they saw that she was serving a pork roast. The mother poked her son and asked if it was pork. He replied, “it’s Christian chicken!” – Todd Siben

Jews Try Pork For The First Time, Despite Taboo. So How Did That Go?