There’s basic kitchen wisdom: “Write the date on anything that goes in your freezer.” There’s girlfriend guidance: “Turmeric will stain your hands. And nail polish. Wear gloves.”

And there’s the distinctively idiosyncratic: “Raisins are the unfulfilled potential of grapes. They could have been wine. Now they are ruining noodle kugel for children everywhere.”

Raisins, it seems, are an issue for Renov — so much so that they reappear in the last of the 86 things where she writes, “This is a banana, raisin, and marinara free book. Just so you know.”

Apparently, some who saw the manuscript prior to publication worried about the raisins.

“So many people ask me about number 86 of the 86 things,” Renov said recently. They were afraid it might alienate readers. “I was trying to make a point: I like all the food in this book. I don’t like raisins. There’s nothing in there with raisins because how could I give you a recipe that I don’t want to eat? The book is really authentic to who I am. I would say I only knew how to write it one way, and that was with me in it.” 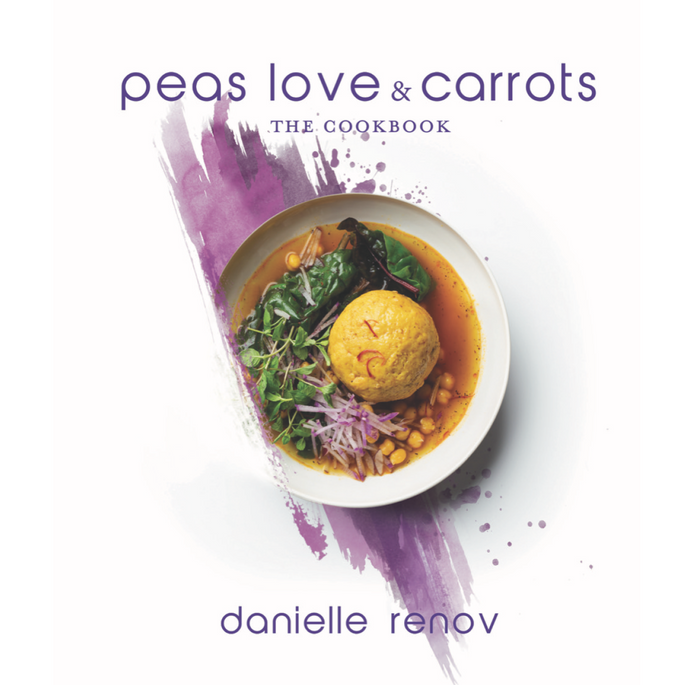 Renov grew up on Long Island, the child of a Conservative New York-born Ashkenazi father and a Sephardic Moroccan mother from Casablanca who was raised in Paris before moving to the Five Towns, a thriving Jewish community on the South Shore of Long Island. Once married, Revov said, her mother cooked the best from both cultures, learning to make kugel and pot roast and “grill steak like a champion.”

“What it taught us in terms of food is there are no limits,” Renov said. “You can bring different cultures into your life and eat everything. My parents had an appreciation for all types of food and passed that onto us. And I moved to Israel and its identity is really mixed up and a mushkabobble of different food cultures. I’ve been here for 13 years and that culture has seeped into my culture.”

The resulting recipes represent a vibrant, cross-cultural amalgamation of foodways. They reflect Renov’s Moroccan and Ashkenaz background and the wide variety of culinary and cultural influences she found in Israel — Palestinian, Lebanese, Turkish, Syrian, and more. “And who doesn’t love a good Mexican fish?” she asks. “So it’s a mixture of everything that I love. I couldn’t put myself in a box because I don’t live in a box.”

Indeed from cover to cover, “Peas Love & Carrots” is a reflection of its author. Voice-driven and breezy, the book is filled with tips and guidance in addition to some 250 highly approachable recipes — and it expresses Renov’s deeply held values surrounding family, faith, and sustainability. Food, for her, is a way of connecting all three.

“From a Jewish perspective, I believe God gave us this beautiful earth and it’s not ours to trash,” she said. “We were given this world and we have to leave it to future generations, and every generation takes its toll on the earth more and more and it’s simply unfair. There are ways to eat and live off this planet without destroying it. Here in Israel we’re on this tiny land, smaller than New Jersey, and if we don’t sustain this land then what will our children have?”

Toward that end, Renov recommends eating seasonally and locally and supporting local farmers and vendors — hard to avoid in Israel, but often an afterthought in many other places. “Even though I knew in New York that things tasted better at different times of the year, they were still accessible,” she said. “If I had to have a strawberry in February, I could go buy a strawberry.”

Soon after moving to Israel, she planned to make a dessert that involved strawberries and spent hours searching for them. It was summer, so it didn’t occur to her that they would be unavailable. “So I’m looking and looking — where the heck are the strawberries,” she said. “So I walk into a local fruit and vegetable store and he literally laughed in my face like I was a crazy person.”

In Israel, he explained, strawberry season is in January, so you eat strawberries in January.

“I learned that instead of making a menu and then going shopping, I need to go shopping before I make a menu,” Renov said. She went back to the store with a notebook and asked the shopkeeper to tell her all about the seasons, which he did.

In addition to learning to shop seasonally, Renov quickly learned to support local farmers and vendors. Whereas her American family had shopped the American way, buying everything at one big supermarket, when she moved to Israel there were only little shops and the sprawling open-air markets known as shuks. Renov learned that you go to the meat vendor for meat and the fishmonger for fish. You go to the herb guy for herbs and the watermelon guy for watermelon.

“They get first dibs on the best products,” she said, explaining that because they’re only dealing in one thing, the grower is going to go to those vendors first because they’re selling more than anyone else.

“You get better-quality food and better-quality ingredients, and you’re supporting people who have been doing this for literally a hundred years,” she said. “There are vendors in the shuk who’ve inherited their stalls from their great grandparents — most of the stalls in the shuk are inherited. Especially now, with everything going on in the world, we have an obligation to sustain our local vendors, to sustain each other.” 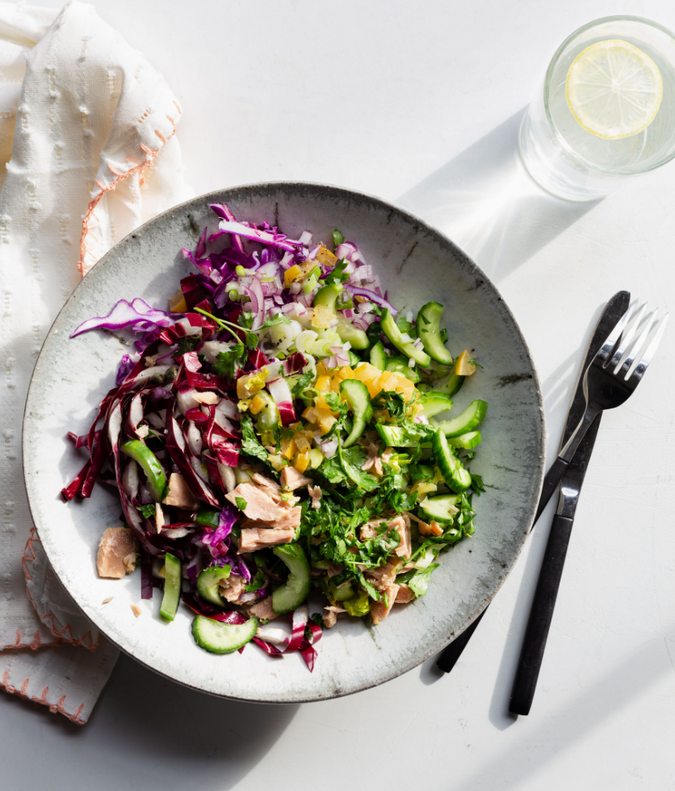 All that local produce is featured prominently in “Peas Love & Carrots,” which has a vibrant section devoted to salads and another to vegetable-focused sides. The salad chapter kicks off with a dazzling photo of a dozen colorful dressings (there’s an image associated with every recipe in the book) followed by pages of salatim —the small plates of salad which, along with dips and spreads, form the Middle Eastern mezze. According to Renov, “No Shabbos meal can begin in our home without an assortment of these salatim.”

One of Renov’s favorites is the grain-based farro and cherry tomato salad, which she calls her Shemittah salad because she moved to Israel in a Shemittah (or Shmita) year, when farmers take a break from harvesting or planting their fields.

“Grain salads became my best friend, because somehow we never run out of grains (or tomatoes),” she writes in the recipe headnote. Another favorite is her tuna salad a la moi, which is bright with shredded purple cabbage and radicchio along with a variety of other vegetables and a scattering of chopped preserved lemon — a definite departure from regular tuna.

Renov’s grilled chicken panzanella is a hearty take on the typical Italian bread salad. “If I’m going to go through the effort to start grilling bread,” she writes, “I’m going to add some chicken on to that grill and make this a whole meal, or at least a significant part of a beautiful Shabbos meal!” 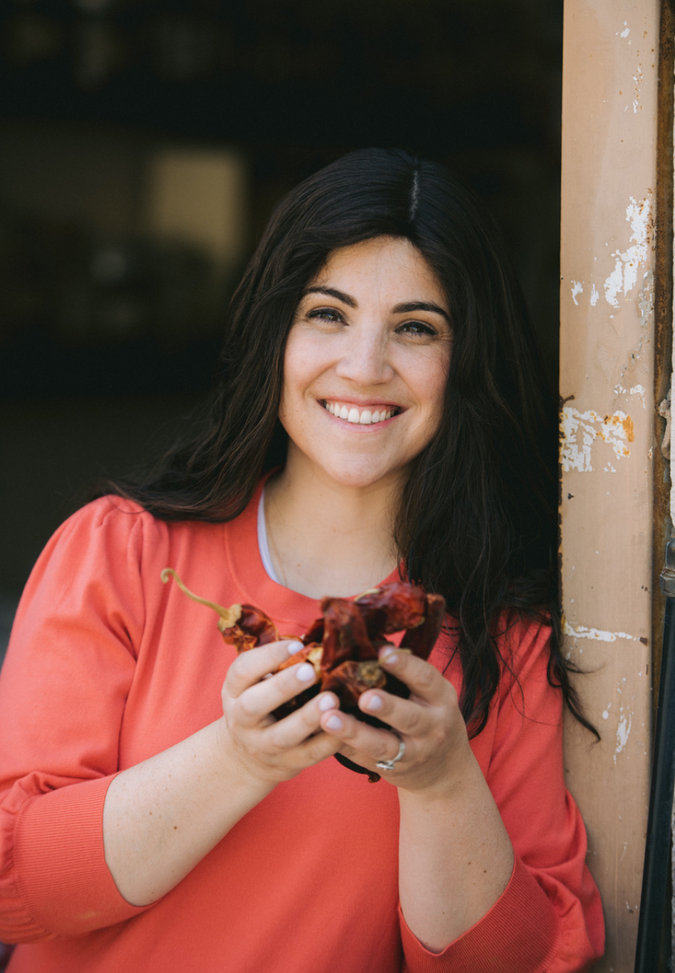 Every dish in this user-friendly cookbook is easy to find. Following the salads are chapters devoted to soup, fish, poultry, meat, sides, dairy and sweets. There’s also a “foundations” section that includes recipes for challah, preserves, pickles, and dips. There are two separate recipe indexes, one at the front that’s organized by chapter and another at the back that’s alphabetical.

So which dishes are most significant to Renov?

“I think the recipes that are the most meaningful to me are less about the food itself than the memory it creates for me,” she responded. “The same way a song or a smell can transport you back, food does that to me. I think the foods that are very significant to me throughout my life, most of them are the Moroccan recipes.” There’s fifle tomatese, which she describes as a basic Moroccan stew, usually made with leftover chicken. “We ate that at least once a week growing up, and I serve it now to my kids,” she said. “As a kid it wasn’t significant to me, but as an adult it became significant to me.”

Another is a dish called mufletta that’s traditionally served at Mimouna, the celebration that follows Passover. “It’s the most delicious thing, but it’s so tedious to make,” Renov said. “Whenever I asked my grandmother for it she always made it for me, and it’s one of my favorite things in the world. Publishers give you a page limit, and even though I didn’t think it was a recipe that many people would make, for me it had to be in the book.”

Of course it did. Because for Renov, “Peas Love & Carrots” is nothing if not personal.

A former food editor of the Forward, Liza Schoenfein is author of the blog Life, Death & Dinner. Follow her on Instagram @LifeDeathDinner.