How to make a gazoz By Dan Perez 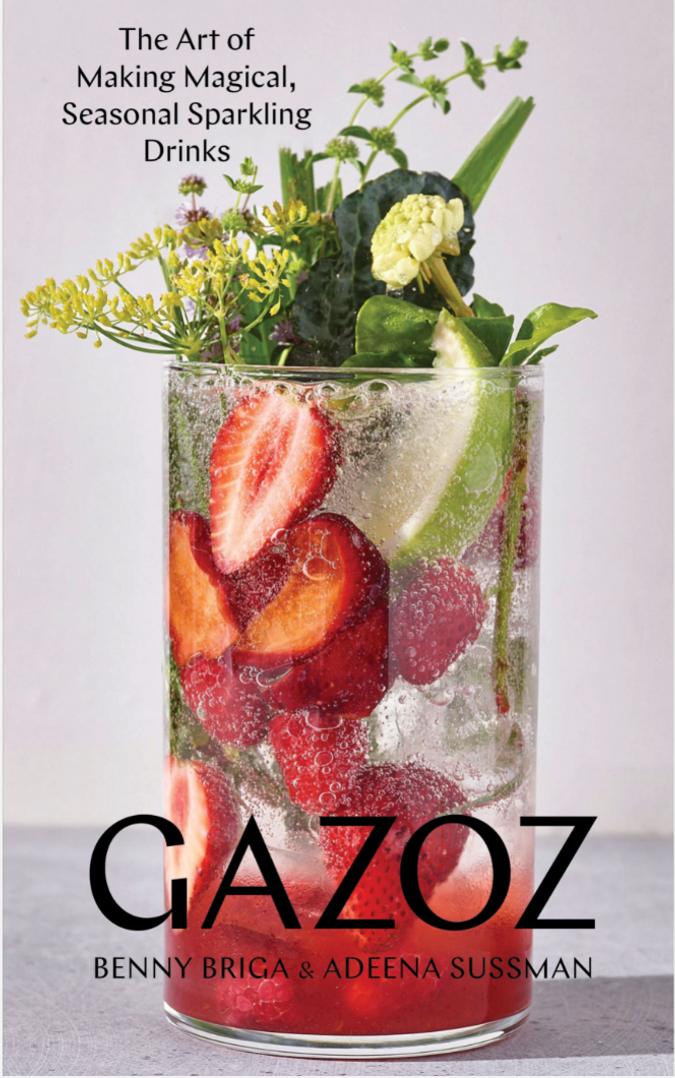 The “Gazoz” cookbook By Dan Perez

If you visit Levinsky Market, an unmanicured patchwork of small food and spice stores in southern Tel Aviv, stop at Cafe Levinsky 41. You can get a good cup of espresso there, but don’t waste time on that. What you want is owner Benny Briga’s gazoz, a carbonated, fruit-flavored and artfully decorated drink — think garden in a cup. Gazoz is Briga’s calling card, and it propelled him to foodie stardom all over Israel and beyond.

Now Briga and food writer Adeena Sussman have written a book, “Gazoz: The Art of Making Magical, Seasonal Sparkling Drinks.” Envisioned as more of a road map than a classic cookbook, this book gives you the tools to assemble gazoz drinks. They then set you free to make them in your own style. You like probiotics? Add kombucha. Looking for some zing and extra anti-oxidants? Mix in fresh ginger or turmeric purees. The reader, said Sussman, should not feel “hemmed in by too many specifics about combinations and even amounts.” You won’t find a teaspoon or a tablespoon measure in the pages devoted to gazoz drink “recipes.”

Briga’s gazoz is starkly different from the original version of the drink that has been around Tel Aviv for more than 100 years. The classic gazoz was made by combining soda water with brightly colored, sugar-laden, artificially flavored syrups like mishmish (apricot), lemon and _pete_l (raspberry).

Briga’s artisanal gazoz is also bubbly and sweet, but most of the similarities end there. The sweetness in his drinks comes from fresh and fermented fruits, simple fruit and vegetable syrups, herbs, spices, food grade flowers, greens, and sweet and tangy fermented beverages like kombucha, jun and kfir.

Benny has never made the same glass of gazoz twice; each one is a unique combination of natural elements. Just as the cookbook is free of measured quantities, Briga’s cafe is menu-less. Tell Briga you want a drink, specify the size — 12 or 16 ounces — and he will create your gazoz — one that reflects you and the season and is made from the freshly picked and fermented ingredients lining the shelves of his tiny cafe.

The original gazoz fell from favor in Israel several decades ago. Benny revived it shortly after he opened his cafe in 2013.

“I never thought I would be the man to bring gazoz back to the world,” said Briga. “In a beautiful crazy way, it happened by accident.” How to make a gazoz By Dan Perez

When Briga opened Cafe Levinsky 41, he sold coffee, sparkling water and cookies. Inbal Baum, founder of Delicious Israel, a company that leads Israeli food tours, brought groups to Levinsky Market to taste the bourekas, dried lychee, halva and other Middle Eastern specialties that one finds there. She often brought her groups to Benny’s place for a drink.

In June 2013, Baum was touring then-Chicago Mayor Rahm Emanuel and his daughter, who were visiting Israel for her bat mitzvah trip. Baum planned to bring them to Levinsky Market, so she contacted Briga beforehand and asked him to come up with something special for the mayor’s daughter. “She won’t drink coffee,” Baum told Briga. “What can we give her?”

And that’s when Briga’s 21st century version of gazoz was born. As he recounts it, Briga “brought from home jars of jams and syrups and preserved fruit.” He presented his gazoz-au-naturel to the mayor’s daughter. It was a big hit. And it started him on the road.

His first glasses of gazoz, said Baum, were “like fruit salad and soda in a cup.” He then began to add more fermented elements, which is where he is today. The book, filled with beautiful photos of Briga, his rooftop garden, organic farm and charming shop, guides the reader in the art and science of making natural sodas.

The whole process of preparing the elements of gazoz and then combining them brings together a host of different of-the-moment food trends, says Sussman. “Gazoz feeds into the zero proof cocktail revolution and what is going on with non-alcoholic drinks and seasonality. In a very natural way, every glass of gazoz touches on veganism, seasonality, and foraging.”

Fermenting fits into today’s world. “Because of the pandemic,” said Sussman, “people are brewing things and fermenting things and tending to different ‘mothers.’ Lots of that comes into play here.”

The first half of the book is the “science” side: what equipment you need; how to ferment fruit and vegetables in sugar; fermenting whole dried spices and chiles; how to brew probiotic drinks; and how to decorate your glass. Most of the elements of the drinks are vegan. There is even one for an American-style egg cream, made, under Sussman’s direction, with almond milk.

Before the reader gets to the loosely tailored recipes in the second half of the book, Briga and Sussman give tips on how to fully enjoy a glass of gazoz: look at its beauty, inhale its aroma, sip it through a straw, and then eat the fruit at the bottom of the glass.

American artist Andy Warhol celebrated Coca-Cola in his iconic images. No matter where you buy it, the cans and their contents are always the same. Turn 180 degrees and you will find Briga’s gazoz — a reflection of the natural world, each cup its own work of art.